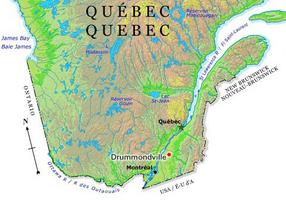 Originally settled by English soldiers and French settlers, it became a focal point for people because it was easy to cross the river at the foot of the falls. Potash manufacturing was the town's first economic activity. Later, the post-Confederation era brought industrialization with the development of sawmills, tanneries, forges, railways, hydroelectric plants and cement factories. In 1915, during WWI, a factory manufacturing "smokeless gunpowder" opened and transformed the town's economy. However, real development began with the establishment of the textile industry in 1918. Nowadays, the town has a large diversified industrial park, and its proximity to major roadways between Montréal, Québec City and the US has made it a favoured location for numerous trucking companies.

Le Village québécois d'antan, with some 50 historical buildings recalling life in the 19th century, and the Trent Manor (1838) are located on a native site near the river. Drummond is host to Le mondial des cultures - the largest folklore festival in North America - which draws some 500 000 spectators.