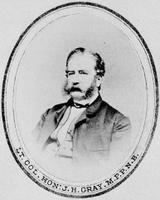 John Hamilton Gray, QC, premier of New Brunswick, judge, lawyer (born 1814 in St. George, Bermuda; died 5 June 1889 in Victoria, BC). John Hamilton Gray served in the New Brunswick Legislative Assembly, in the Canadian House of Commons and on the British Columbia Supreme Court. Remembered as a Father of Confederation, he was a very early proponent of British North American union and attended the Charlottetown and Québec Conferences. Gray was one of the few 19th-century public figures to oppose the discriminatory taxation and exclusion of Chinese immigration to Canada.

He is not to be confused with John Hamilton Gray (premier of Prince Edward Island).

John Hamilton Gray’s grandfather, Joseph, was a Loyalist from Boston who settled in Halifax after the American Revolution. Gray was born in Bermuda, where his father, William, was the naval commissary. When Gray was five years old, his father became the British consul in Norfolk, Virginia. He received his degree from King’s College in Windsor, Nova Scotia, (now the University of King’s College in Halifax) in 1833 and was called to the New Brunswick Bar in 1837. He practised law in Saint John, New Brunswick, and developed a reputation for his stirring courtroom oratory. He became a Queen’s Counsel in 1853 and Chairman of the King’s College Commission in 1854.

In addition to his legal career, Gray served in the New Brunswick militia. He was appointed a captain in the New Brunswick Regiment of Yeomanry Cavalry in 1840 and was a major in the Queen’s New Brunswick Rangers by 1850, becoming the latter regiment’s lieutenant colonel in 1854. Gray met his wife, Elizabeth (Eliza) Ormond, through his military connections. He was a friend of Eliza’s father, Lieutenant Colonel Harry Smith Ormond, who commanded the 30th Foot in New Brunswick. Gray visited him in Dublin and married Eliza there in 1845. The couple had seven children.

John Hamilton Gray was described as "Conservative of the old school [...] gentlemanly [...] forgiving" by a Liberal journalist. He was considered somewhat shallow, due to his repeated changes of party affiliation. In 1850, he stood for election to the Legislative Assembly in St. John County as a Liberal, and then switched to the Conservatives the following year, becoming a member of the Executive Council.

His premiership of New Brunswick, 1856–57, was tarnished by imperial influence, and his support of Confederation saw him abandon his Conservative colleagues for the Liberal Samuel Leonard Tilley. Gray defended his changing party affiliations by arguing that he could better serve his constituents as a member of the government.

Over the course of his career, Gray’s reputation as an orator “of the most finished and classic type” grew. He achieved a reputation as “perhaps the most polished speaker on the floors of the House, as though he had prepared his speeches over the midnight oil, and set phrases to music [...] his impromptu replies to opponents being of equal polish.” His critics argued that his public speaking abilities masked his deficiencies as a policy maker. In 1864, the Saint John Morning Telegraph reported that he had said, “Nothing worthy of serious refutation” at a public meeting about whether New Brunswick should join Confederation.

John Hamilton Gray advocated union as early as 1849, when he moved a motion in the newly created New Brunswick Colonial Association calling for a "federal union of the British North American colonies, preparatory to their immediate independence." The motion was swiftly defeated. He attended the Charlottetown and Québec Conferences, first supporting a Maritime union, then Confederation.

Gray had a strong working relationship with John A. Macdonald and supported him on the issue of the division of federal and provincial powers. At the Québec Conference, Gray stated, “I think it best to define the powers of the Local Governments as the public will then see what matters they have reserved for their consideration, with which matters they will be familiar, and so the humbler classes and the less educated will comprehend that their interests are protected.”

In the campaign to persuade the people of New Brunswick of the merits of Confederation, Gray became known as one of Samuel Leonard Tilley’s staunchest allies. Later in his political career, Gray wrote the first volume of a planned two volume work, Confederation; or, the Political and Parliamentary History of Canada from the Conference at Quebec, in October, 1864, to the admission of British Columbia in July, 1871.

In 1867, John Hamilton Gray entered the House of Commons by acclamation, where he became Chairman of the Committee of Supply. He remained in office until 1872. His eventual reward for his support of Confederation was a judgeship in British Columbia's Supreme Court in 1873. Though resented by some in British Columbia as an "empty-headed favourite," Gray's reputation as a jurist and arbitrator grew.

He stood against the majority in his defence of the rights of the Chinese and became an expert on Canadian-American boundary negotiations. In 1878, Gray declared the newly passed Chinese Tax Act was “unconstitutional and void” because it was intended to “drive the Chinese from the country, thus interfering at once with the authority reserved to the Dominion Parliament as to the regulation of the trade and commerce, the rights of aliens, and the treaties of the empire.” He did, however, suggest a $10 tax on Chinese immigrants in his final report as a commissioner on the Royal Commission on Chinese Immigration in 1885 (see ​Chinese Head Tax in Canada).

Although John Hamilton Gray was better known in his lifetime for the style of his oratory than the substance of his ideas, he was ahead of his time on key political and social issues. Gray called for a federal union of the British North American colonies 18 years before Confederation and was one of the few public figures to challenge discrimination against Chinese-Canadians in the late 19th century.