London, Ont, incorporated as a city in 1855, population 366 151 (2011c), 352 395 (2006c). The City of London, the seat of Middlesex County, is centrally located in the southwest peninsula of the province, on the Québec-Windsor corridor midway between Toronto (185 km) and Windsor (190 km). Due south lies Lake Erie, with Lake Huron to the northwest. London's market and service area to the north and northeast includes much highly productive farmland. To the southwest and southeast lie intensive cash-crop areas, especially Canada's main TOBACCO-growing area. Noted as a financial, educational and medical centre, London is also a regional base for business firms and government, both provincial and federal. 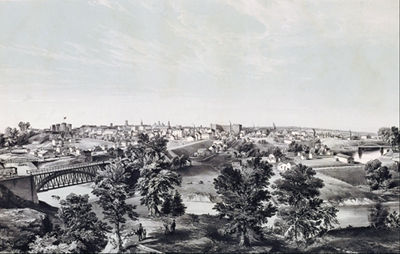 London, shown here in 1855, grew with the prosperity of its fertile surrounding farmlands and as an administrative centre (drawing by Edwin Whitefield, courtesy Library and Archives Canada/C-612). 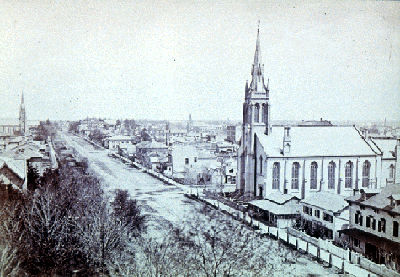 1876. The prominent structure in the foreground is the Wesleyan Methodist Church, destroyed by fire in 1895. (courtesy D.B. Weldon Library, U of Western Ontario). 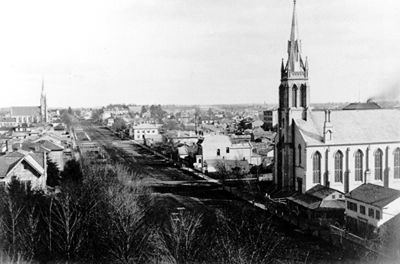 Within the territory of the NEUTRALS, who were succeeded by the OJIBWA, London began as a 405 ha site reserved by John Graves SIMCOE in 1793 as the future provincial capital and strategic pivot for defence. There were then few European settlers west of Lake Ontario, but after Thomas TALBOT's colonization scheme expanded north from Lake Erie, and on the recommendations of the military after the War of 1812, it was laid out (1826) at the reserved townsite as the seat of the London District. Construction of the masonry courthouse - a fortresslike structure with crenellated towers - followed immediately.

Southwestern Ontario saw a large influx of settlers during the 1830s, and the new town grew apace. The REBELLIONS OF 1837 led to the stationing in London of the largest body of British troops west of Toronto; from this time dates London's reputation as a "garrison town." During the 1840s improved road links stimulated commercial growth, and the many hotels, businesses, banks and newspapers reflected the town's regional primacy. The opening of the GREAT WESTERN RAILWAY (Niagara-Hamilton-Windsor) in 1854 ensured London's continued growth as a regional centre.

In 1855 it was incorporated as a city (pop 10 060). It thereafter became the seat of a Roman Catholic and an Anglican diocese (Huron). With further railway construction and settlement, and Canada's first oil boom 80 km to its west, the city's economy diversified and London began to develop a financial role with the formation of companies, now nationwide, such as London Life Insurance and CANADA TRUST (1864). Manufacturing, especially brewing, developed as well. Both John LABATT and John CARLING were associated with London.

In 1863 the Anglican Huron College, precursor of the UNIVERSITY OF WESTERN ONTARIO (1878), was founded. In the following decades, schools and colleges of other denominations were added; a community college, Fanshawe, opened in 1967. The London Asylum (1860) was the first regional hospital; Maurice BUCKE was an early superintendent.

London's older central portion is a grid of wide streets laid out on level ground between north and south branches of the THAMES RIVER. Subsequently, the occasional annexation of adjacent land has resulted in a city area of 421.77 km2, half of it acquired in 1993. The city's suburban expansion post-1945 has moved north, west and south, onto somewhat higher land. Distinct neighbourhoods centred on shopping plazas now extend in a nearly complete circle around the older core, which has recently struggled to hold on to its share of shopping and entertainment business. The grand reopening of the beautifully designed Covent Garden Market (first opened 1845; reopened 1999) in the old market square was hailed as a harbinger of better things to come for the badly depleted downtown. The 2002 opening of the John Labatt Centre, a state-of-the-art hockey arena and concert venue for major acts, helped the downtown regain its primacy as an entertainment centre. London's 19th-century houses are commonly built of a pale yellow ("white") brick, frequently having a distinctive keyhole- or horseshoe-shaped side window.

Noteworthy buildings include Eldon House (1834), an elite residence that is now a museum, the old courthouse (1828) and St Paul's cathedral church (1846). Woodfield Village, a Victorian residential district of the old town, contains many heritage houses.

Known as the "Forest City," its many 19th-century street-side plantings are chiefly of large silver maples. The total city area (not counting the 1993 annexation, which took in mostly farmland) includes one-sixth in open space, much of it along the rivers. Springbank Park, the largest park (78 ha), contains Storybook Gardens, a widely known children's zoo (1958). Victoria Park (6 ha), in the city's centre, is the oldest park (1874) and the venue of both summer and winter festivals.

For most of its history, London's population has grown more by in-migration than by natural increase. As befits so classic an Upper Canadian, colonial town, even in the most recent census (2001c), more than one-third of Londoners identified all or part of their ethnic origin as English, followed by Canadian, Scottish and Irish. Those with German, French and Dutch ancestry were also strongly represented.

London's highly diversified manufacturing base today ranges from breakfast cereals (Kellogg's, 1924) through abrasives (3M, 1952) and light aircraft (Diamond, 1993) to heavy diesel locomotives (GM, 1949). Many firms are engaged in supplying components to automobile assembly plants in southwestern Ontario and the United States. London's hinterland contains much of Canada's most productive agricultural land, while the city's regional centrality is constantly being strengthened by improved communications and its dynamism in the research and development of medical and manufacturing technologies. Over three-quarters of the labour force are in the service industries. Trade is the next important sector of the economy, with nearly 20% of the labour force, with the remaining sectors of nearly equal importance.

From the mid-1850s, London has been a major railway junction and division point, served by main lines of CN and CP Rail. VIA Rail's London passenger terminal is the third busiest in Canada, and the city is also served by Amtrak with daily services from Chicago. The London International Airport supports 5 scheduled airlines offering frequent feeder services to major hubs at Toronto, Ottawa, Montreal and Detroit.

A regional highway node in the 1930s and 1940s, London is now linked by freeways to Windsor and Toronto (highway 401), Sarnia-Port Huron (highway 402) and Hamilton (highway 403). Proximity to these 3 strands of the "NAFTA superhighway" (2 of which - the 401 and 402 - actually pass through London's municipal boundaries) ideally situates the city along the path of this commercial conduit that is estimated to carry 35% of the total trade between Canada and the United States. In addition to bearing heavy use by transport trucks, these freeways draw considerable tourist traffic. Scheduled coach services to Toronto, Detroit and Buffalo include numerous express runs on freeways. For its internal transit, London has used publicly run buses since 1940 and, before that, electric and horse-drawn streetcars.

Since 1847 London has for the most part been governed by a mayor and council members representing 4 wards. After a large annexation in 1961, the city added 3 wards and adopted a board of control (mayor plus 4 controllers directly elected) in addition to the 14 ward councillors. This structure was continued after the annexation of 1993, with greatly enlarged ward areas.

City politics are not strongly polarized, and issues tend to concentrate on control over peripheral expansion, attraction of business, viability of the city core, etc. The public and separate (Catholic) school boards are also elected bodies. The 1993 annexation legislation abolished the elected Public Utilities Commission (PUC), created an appointed Hydro-Electric Commission and also transferred responsibility for parks and recreation from the defunct PUC to the municipality as a civic department. In 1995 a reorganization of city departments dispersed the functions of parks and recreation to 3 other departments. Planning activity has been systematic since 1946, when a regular planning board was formed.

The University of Western's Don Wright Faculty of Music has contributed greatly to vigorous musical activity; there are frequent recitals and concerts, including those by Orchestra London, choirs such as the London Fanshawe Symphonic Chorus and Pro Musica, and some outstanding resident organists. London's most famous son is probably band leader Guy LOMBARDO. Actors Hume CRONYN and Kate NELLIGAN also hail from London.

Amateur theatre was first produced in London by the British garrison officers in 1839. Later that century the Holman Opera Company used London as home base for developing shows that toured Canada and the States. The 1930s through the 1950s were the glory years of London Little Theatre (LLT). Perhaps owing to the success of the amateur era, LLT went professional only in 1971 and operates today as the GRAND THEATRE company, named after their beautifully refurbished, century-old theatre. Soon after the LLT went professional, a new amateur group, the London Community Players, arrived on the scene. Museums include a pioneer village (at Fanshawe Park) and an archaeology museum featuring a reconstructed 500-year-old Neutral village. The Banting House National Historic Site retraces the discovery of INSULIN. Sir Frederick BANTING and other prominent medical scientists are honoured at the Canadian Medical Hall of Fame.

Nine commercial radio stations operate from London. The one TV station, CFPL, and the one newspaper, The London Free Press, were both owned by the Blackburn family from their inception and were sold off to Toronto media corporations (CHUM/CITY and Sun Media, respectively) in the 1990s.

The London Knights compete in Major Junior A hockey at the John Labatt Centre. In 2002 London acquired one of the founding teams of the Canadian Baseball League. The Monarchs play in historic Labatt Park at the Forks of the Thames River, in the heart of the city. Various amateur sports and the many university teams also attract players and spectators.