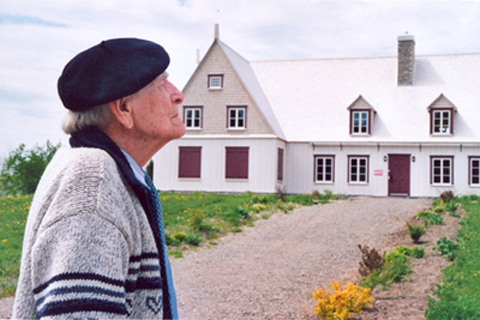 Historian Marcel Trudel, pictured here in 2010, dedicated his career to the study of New France.

Marcel Trudel, historian (born at St-Narcisse, Qué 29 May 1917; died at Longueuil, Qué 11 Jan 2011), one of the masters of contemporary Québec historiography. He shaped generations of historians, first at Laval (1947-65), briefly at Carleton University and then at Ottawa University (1966-82). His demanding view of the profession of historian causes him to reject the formulas of "edifying history" and the bias of nationalist history. He strove for an even-handedness which is disturbed only by an occasional undercurrent of anticlericalism. His work, which centered on telling the story of NEW FRANCE, is commendable for its erudition, precision and respect for primary sources.

His overall vision of Canadian history is close to that of Arthur Maheux, Léon Gérin and Gustave Lanctot. A specialist in the French régime, he has a great many works to his credit, including the learned Histoire de la Nouvelle France (1963-83). Trudel received the Molson Prize in 1980 and was named an Officer of the Order of Canada in 1971. He retired from teaching at the UNIVERSITY OF OTTAWA in 1982, but continued to publish. Over half of his work was published in the last 20 years.