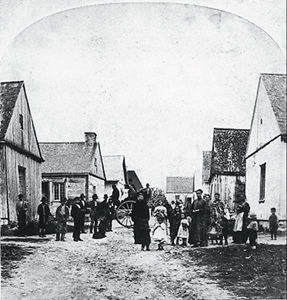 The Seven Nations were located at Lorette, Wolinak, Odanak, Kahnawake, Kanesetake, Akwesasne and La Présentation. Sometimes the Abenaki of Wolinak and Odanak were counted as one nation and sometimes the Algonquin and the Haudenosaunee (Iroquois) at Kanesetake were counted as two separate nations. The Onondaga of La Présentation (Oswegatchie) were the last to have their settlement organized in 1749.

Each nation was independent, or according to their metaphor, had its own fire. The central fire was at Kahnawake. Their alliance was a kinship relation in which the Huron-Wendat of Lorette were accorded the highest honour and were known as the uncles, and all the others were brothers. The Governor (Onontio) and the King of France (Onontio-Goa) were fathers with a right to mediate in disputes among the allied nations.

The French maintained alliances also in the hinterland, especially with the Three Fires Confederacy, and these nations were regarded as nephews by the Seven Fires. Negotiations with the upper country nations were conducted by the Algonquin of Kanesetake, while negotiations with the Haudenosaunee Confederacy in New York were conducted by the Mohawk of Kahnawake. The French governor and senior officers always visited the seven villages and participated in the war dance before embarking on a joint campaign.

The Seven Nations participated as allies of the French in the War of the Austrian Succession (1744-1748) and in the early campaigns of the Seven Years' War. In 1760, after the fall of Quebec the previous year and the approach of three British armies, the Seven Nations began negotiations to reach some status of neutrality. They obtained the guarantees they sought by a Treaty of Oswegatchie in August 1760, confirmed at their central council fire at Kahnawake in September of that year.

The Seven Nations entente continued under the British regime. In 1767 they explained that they shared their hunting territories since about 1722, when the five original nations made such an agreement in the presence of the French governor. By 1829, the pressure of settlement was so great that they reverted to the earlier practice of individual hunting grounds.

By the 1830s, the nations dealt individually, not as a federation, with government officials, while maintaining the kinship vocabulary which had been transferred to the British governor and monarch.