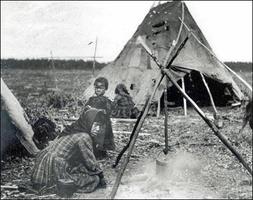 Slavey (also Awokanak, Slave, Deh Gah Got'ine or Deh Cho) are a major group of Athapaskan-speaking (or Dene) people living in the boreal forest region of the western Canadian Subarctic. Although there is no equivalent in Dene languages, the term has been adopted by many Dene as a collective term of self-designation when speaking English. The Slavey inhabit an area dominated by lakes, mountains and river systems which extends along the Slave, Athabasca and Mackenzie drainages south from Fort Nelson, BC, on the west and from the Hay Lakes region of Alberta on the east, north to a region near Tulita and the south shore of Great Bear Lake in the Northwest Territories. They are closely related linguistically and culturally to the K'asho Got'ine, Gwich'in and Tlicho.

Archaeological evidence suggests that the Slavey region has been inhabited from at least 3000 BC (see Prehistory). During the late precontact period, the Slavey economy was based on the harvesting of fish, small game, moose, caribou and berries. In winter the Slavey camped in groups or local bands of some 10-30 kin-related individuals. In summer these groups came together briefly near the shores of a major lake to form a regional band of perhaps 200 persons.

Initial European contact occurred with Alexander Alexander Mackenzie's expedition in 1789. Soon after, trading posts were established throughout the area. After 1821 the Hudson's Bay Co made Fort Simpson its major terminus for the Mackenzie region and in 1858 Anglican and Roman Catholic missions were established. In 1899, the Slavey, Cree and Athapaskans (Dené) including Denesuline, Dane-zaa, Slavey, Tlicho and Yellowknives negotiated the first of the northern treaties, Treaty 8. Slavey in Alberta, BC and some parts of the Northwest Territories were incorporated into Treaty No 8 between 1899 and 1911, those in the rest of the NWT into Treaty No 11 in 1921-22 (see Treaties). Despite the influx of many non-Dene, evidence indicates that the Slavey, between contact and the end of the Second World War still lived for most of the year in small, kin-based communities, harvested traditional foods, spoke their own languages and raised children in the manner of their parents.

In 1920 and in 1937 the Slavey, Tlicho, Denesuline, and Yellowknives boycotted the treaty days and refused federal funds to protest the strict game law regulations that were imposed in violation of treaty promises.

Transformations
After the Second World War new government programs intended to extend benefits including health care and schooling to the Slavey, together with economic conditions which resulted in a collapse of the fur trade, brought about a major transformation in the lifestyle of the Slavey, as people moved into town and sent their children to school. However, recent studies show that subsistence obtained through traditional harvesting remains a significant activity.