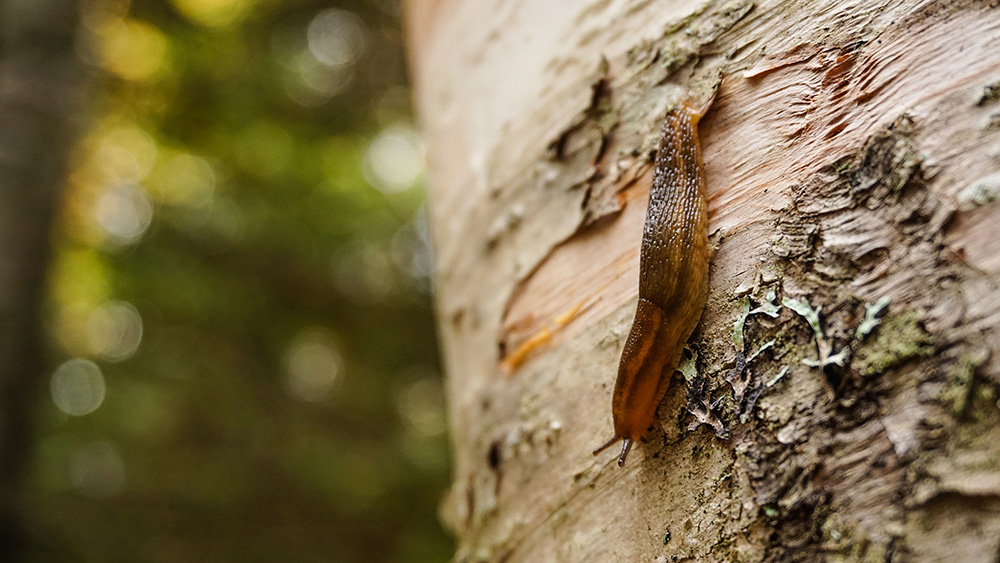 Slug is a common name for several terrestrial pulmonate and numerous marine gilled species of gastropod molluscs conspicuous by the lack of an exposed shell. Terrestrial slugs have rudimentary shells, embedded in the body tissue. The mantle encapsulates a lung sack which communicates with the outside atmosphere through a single breathing pore; gills are absent. The head bears sensory tentacles and encloses a rasping feeding organ, the radula. Land slugs possess a muscular foot which employs peristaltic muscle waves, aided by mucous secretions, to creep over the substratum. Canada's introduced greyish brown European slug (Limax maximus) grows to about 15 cm, but most land slugs are much smaller. The most destructive slug is the black slug (Arion ater). Most slugs are herbivorous but Arion ater will, in addition, feed voraciously upon animal flesh and feces. Fortunately, this species is easily attracted to slug baits.

The sea slug (Melibe leonina), a predacious, semipelagic opisthobranch gastropod, inhabits open, quiet channels, eelgrass beds and kelp forests from BC to California. The genus name Melibe ("honeylike") refers to the resin-sweet odour that it imparts to anything touching it. This sea slug can attain 10 cm in length and resembles a diaphanous, truncated soupspoon, with several inflated, ovoid leaves on its handle. Delicate in appearance, it is often mistaken for a strange jellyfish. Melibe usually comes in translucent shades of yellow, brown, grey and lavender, but can be colourless. A convincing swimmer of the thrashing-twisting school, the sea slug can also trap air in its oral hood for buoyancy. The large, basket-shaped hood is fringed with a mane of slender tentacles which are used as strainers for retaining minute zooplankton as water is forced out of the oral basket. Reproduction is a gregarious affair with hundreds of animals collecting at one site for mating. The broad, spiral ribbons of eggs are laid in summer.