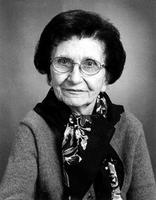 Violet Louise Archer (born Balestreri), CM, composer, teacher, pianist, organist, percussionist (born 24 April 1913 in Montréal, QC; died 21 February 2000 in Ottawa, ON). A composer of marked individuality, Violet Archer was widely recognized for her command of both traditional and contemporary music techniques, and for her large and diverse body of work. She composed more than 330 compositions, many of which have been performed in over 30 countries. Her Piano Concerto (1956) is considered one of the finest concertos composed by a Canadian. She was respected internationally for her dedication to bringing 20th century classical music to young audiences and for being a leader among women composers. A Member of the Order of Canada, she received the Alberta Life Achievement Award, the Canadian Music Council’s Composer of the Year Award, the Canada 125 Award and the Queen’s Silver Jubilee Medal.

Archer was taken by her Italian-born mother to Italy in 1914 at age 14 months; they remained there for five years after the First World War broke out. While in Italy Archer received her first musical impressions, which were strengthened back in Canada by her opera-loving parents and by the Presbyterian Church services that she attended. She began piano lessons at age 10, and in 1930 graduated from the Montréal High School for Girls.

She began working as a piano accompanist at 17 while attending the McGill Conservatory (see Music at McGill University), where she studied piano with Dorothy Shearwood-Stubington and organ with J.J. Weatherseed. She also studied composition on scholarships with Claude Champagne and Douglas Clarke. She earned a Licentiate in Pianoforte at McGill University in 1934, a Bachelor of Music degree there in 1936 and the Associate Diploma of the Royal Canadian College of Organists in 1938.

Archer was a percussionist with the Montréal Women's Symphony Orchestra (1940–47), worked as an accompanist, and teacher of piano and music theory, and was deputy organist at various Montréal churches. She made her formal debut as an orchestral composer with her composition Scherzo Sinfonico, performed by the Montréal Orchestra under Douglas Clarke in 1940. That year, she and the rest of her family adopted the surname Archer, which is an English translation of “Balestreri.”

The following year Sir Adrian Boult selected her Britannia — A Joyful Overture for a BBC broadcast on 19 March 1942. The work was later recorded and broadcast by the BBC to the armed forces in Europe. Her first published composition was Three Scenes for Piano (Habitant Sketches) (1946).

Archer commuted to New York in the summer of 1942 for private study with the Hungarian composer Béla Bartók, who introduced her to Hungarian folk tunes and to variation technique, and instilled in her an abiding interest in folk music. He also inspired her to explore different types of modes and rhythms. She taught at the McGill Conservatory from 1944 to 1947; and then, assisted by the Bradley-Keeler Memorial Scholarship (1947), Québec government scholarships (1948, 1949) and the Charles Ditson Fellowship (1948), she studied composition at Yale University from 1947 to 1949. Paul Hindemith, her principal professor there, taught Archer to play the work on the instrument concerned and to work with the performer.

Archer earned a Bachelor of Music degree from Yale in 1948 and a Master of Music degree the following year. She won Yale’s Woods Chandler Memorial Prize in 1949 for her large choral-orchestral work, The Bell, which was premiered in 1953 by the Montréal Bach Choir. Her Fanfare and Passacaglia was premiered at the 1949 International Student Symposium of Music in Boston. Archer would later receive a citation for distinguished service in music from the Yale School of Music Alumni Association in 1968.

She was a percussionist with the New Haven Symphony Orchestra from 1947 to 1949, and taught at the University of Alberta summer school in 1948 and 1949. An award in 1949 from the Ladies' Morning Musical Club of Montréal enabled her to spend some time in England in 1950. She performed her piano works there, as well as in France, Switzerland and Italy.

From 1950 to 1953, Archer served as the composer-in-residence at North Texas State College (now the University of North Texas), where she also studied musicology with Otto Kinkeldey. She taught at Cornell University in 1952 and was a professor of composition at the University of Oklahoma from 1953 to 1961; while there, she hosted radio and television programs devoted to 20th century music, and acted as a state judge (1953–61) and national judge (1959–61) for various young composer competitions. She received a grant to compose at the MacDowell Colony (the oldest artists’ retreat in the US) in the summer of 1956, and a Canada Council senior fellowship allowed her to take a year's leave (1958–59) from the University of Oklahoma to complete four works, including Apocalypse and the Violin Concerto.

She also lectured at the University of Saskatchewan in 1990 and the University of Alaska in 1992, and was named an adjunct professor at Carleton University. Among her noteworthy students were the composer Larry Austin and cellist Shauna Rolston.

In addition to her academic duties, Archer was an organizer for Canada Music Week in Edmonton and an adjudicator at various composition contests (e.g., Banff Centre for the Arts, CBC, Canadian Federation of Music Teachers’ Associations, Performing Rights Organization of Canada and others in the US). She was involved with the Western Board of Music from 1965 to 1968 and co-founded the Alberta Composers' Association in 1977. She was elected to the council of the Canadian League of Composers in 1975, and served on the advisory board for Edmonton’s celebration of women in the arts in 1988.

A methodical composer, she worked efficiently and comfortably in the Western classical music tradition but also incorporated more modernist serial procedures, parallelism and folk influences into her music. Her early works reflect the influence of modality from such influences as Douglas Clarke and Vaughan Williams. An emerging tendency toward chromaticism can be heard in her work, in addition to her acceptance of the Gebrauchsmusik ethic (music written for a specific purpose). She taught her students 12-tone technique, but never applied it to her own work, nor did she use aleatoric procedures (composing by chance).

Archer produced a large body of music embracing most of the vocal and instrumental performance media, including the comic opera Sganarelle (1973) and a film score for the documentary Someone Cares (1976). The major influence of Hindemith is reflected in much of her output after 1950, a significant number of which consisted of educational or pedagogical works. Recognizing the importance of creating both musicians and audiences that understand and appreciate 20th century harmony, melody and rhythm, she wrote many pieces for elementary and intermediate performers, and encouraged other composers to write for children.

During her teaching years in the US, the influence of Arnold Schoenberg, the creator of 12-tone technique, asserted itself in her variation techniques. Her composition Cantata Sacra (1966) displayed a strong expressionistic element. Her growing interest in dramatic and evocative sonorities led to the expressionism of the Prelude-Incantation (1964). Archer was not afraid of new innovations, and in the 1970s her Haiku and Episodes used electronic sounds.

Among her early works, those for piano were the most skilful, but she soon made effective use of the orchestra, particularly after studying clarinet, percussion, strings and brass, and after becoming Hindemith’s student. Her augmented skills are on full display in her Piano Concerto (1956), with its brilliant solo part and transparent orchestral writing in which the winds have solos in a spare texture — a typical Archer feature. This concerto demands great virtuosity from soloist and orchestra alike.

Her interest in the rhythmic freedom of folk music became highly developed and abstracted in her sonatas and her String Trio No. 2 (1961). Archer described her music as containing Canadian landscape influences; Canadian folk influences can also be found in her Evocations (1987), which incorporates Inuit and West Coast Aboriginal themes. She often turned to Canadian folk music for melodic and rhythmic ideas in her works for children and music students, as well as for concert pieces, such as the piano trio Ikpakhuaq. Often inspired by poetry, she wrote several song cycles and individual songs using poems as varied as those by Walt Whitman, Vachel Lindsay and Dorothy Livesay.

Several of Archer’s compositions have been recorded by such artists as Christina Petrowska Quilico and the CBC Vancouver Orchestra (the Concerto No. 1 for Piano and Orchestra), and by pianist Elaine Keillor and clarinetist James Campbell.

In her final decade, Archer continued composing, teaching and travelling to premieres of her music. In 1993, at age 80, she was composer-in-residence at the Festival of the Sound in Parry Sound, Ontario, and took part in a festival at the University of Alaska. She moved from Edmonton to Ottawa in 1998 to be closer to family, and completed her final commissioned composition, Concerto for Accordion and Orchestra, the year before her death.

Dr. Fordyce Pier of the University of Alberta described Archer’s music as being “characterized by great craft and an often almost overwhelming intensity and intellectual rigor.” Cellist Julian Armour assessed her impact by saying, “Violet Archer's output was phenomenal, and virtually all of it is incredibly well-crafted... For decades she has been one of Canada's most important composers.”

Archer is also remembered for her support of new music, and especially for her belief in the importance of creating 20th century music for youngsters. Her work is especially noteworthy since she achieved recognition at a time when it was difficult for women to become widely accepted as composers. She was one of a triumvirate of modern Canadian female composers — the other two being Jean Coulthard and Barbara Pentland

In 1985, a three-day Violet Archer Festival was held in Edmonton, during which 14 of her major works were performed, including several premieres. The festival marked the first time a North American female composer had been honoured in this way. Her 80th birthday in 1993 was celebrated with a gala concert and celebration in Edmonton, and with a performance of her Variations on an Original Theme for Carillon by the Dominion Carilloneur, Gordon Slater, at the Peace Tower in Ottawa. Her departure from Edmonton in 1998 was marked with a farewell concert, and a small park in Edmonton bears her name.

Soloist(s) or Choir with Orchestra