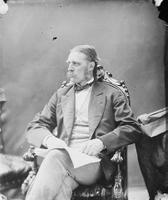 William McDougall, QC, lawyer, journalist, politician, lieutenant-governor of Rupert’s Land and the North-Western Territory (born 25 January 1822 near York, Upper Canada; died 29 May 1905 in Ottawa, ON). McDougall was an early proponent of the Clear Grit movement and an advocate for westward expansion, responsible government and representation by population. He was present at all three Confederation conferences and was embroiled in the Red River Resistance.

William McDougall was born to Daniel McDougall and Hannah Matthews, descendants of United Empire Loyalists, and raised on a farm north of York, Upper Canada. At 15, he witnessed the burning of Montgomery’s Tavern located near his home during the rebellion in Upper Canada on 7 December 1837. He entered the Upper Canada Academy in Cobourg three years later, which in 1841 became Victoria College. He took articles with Toronto lawyer James Hervey Price, a radical reformer, and began to practise as an attorney by 1847. He would eventually join the Bar in 1862 and become Queen’s Counsel in 1881.

He was more interested, however, in journalism than the law. In 1847, he established the Canadian Farmer, an agricultural weekly that later morphed into the Canadian Agriculturalist. His political views were best expressed in the North American, a newspaper he founded in 1850 and which he sold to George Brown in 1855. At that point, he began to write for Brown’s Globe (which later became The Globe and Mail).

McDougall’s political views were shaped by and contributed to the Clear Grit movement, which dominated the anti-establishment party politics of Canada West during the 1850s. Clear Grits believed in simplifying the law, selling off Crown lands and putting an end to special privileges enjoyed by the Church of England and its institutions. McDougall also supported the introduction of a decimal currency, government-funded agricultural improvements, and appropriate spending on public works. Like many of his colleagues, he believed that government tended to corruption and sought honest, democratically elected institutions based on representation by population.

A key plank of the Clear Grits and the more moderate Reform Party was the acquisition of the Hudson’s Bay Company lands, which McDougall had promoted in the North American. When connected to McDougall’s beliefs in representation by population, western expansion was regarded as a means to marginalize Canada East’s influence in the politically deadlocked union legislature. In April 1861, for example, McDougall indicated in a fit of pique that he would “look to Washington” to rescue Canada West from “the control of a foreign race, and of a religion which is not the religion of the Empire.”

McDougall believed that if party discipline stood in the way of a “deal,” he would ignore it, and his search for the right political opportunity earned him the title of “Wandering Willie.” In 1854, he began to run for office, unsuccessfully, as a Reformer. Finally, in 1858, he was elected to Oxford North, George Brown’s old riding. He served in various pre-Confederation coalitions of all stripes as a minister: as commissioner of Crown lands (1862–64), and as provincial secretary (1864). McDougall’s belief in western expansion — which he considered critical to the survival of British Canada — saw Indigenous peoples as obstacles, namely due to their refusal to engage in agriculture on reserves. As commissioner of Crown lands, his department repossessed the majority of Manitoulin Island in 1862 — a First Nations refuge established in 1836 — because it was considered a hindrance to economic development and settlement. The island had been the centre of Aboriginal administration for what is now Northern Ontario and a place where First Nations communities from across the region were settled.

McDougall was a firm proponent of Confederation. He, like John A. Macdonald, dreamed of a transcontinental nation. He firmly believed that the only way out of the political impasse between Canada West and East, and the only way to prevent Canada from becoming irrelevant in North America, was a union of the British colonies and expansion westward. He attended all three Confederation conferences — Charlottetown, Québec and London — and believed that the best moment in his life was the Québec Conference of 1864. It was to him a noble moment, during which party lines were abandoned and the new vision of Canada created.

As minister of public works in Sir John A. Macdonald’s government (1867), McDougall introduced the resolution that led to the government’s purchase of Rupert's Land. He was also present in London to negotiate the acquisition of Rupert’s Land in 1868, but he was sick most of the time and cantankerous the rest, leaving much of the work to Sir George-Étienne Cartier.

On 28 September 1869, McDougall was named lieutenant-governor of Rupert’s Land and the North-Western Territory, a title he held until 12 May 1870 when Manitoba became a province. On 30 October 1869, McDougall and his entourage, which included four of his nine children (whose mother, Amelia Caroline Easton, had recently died), entered the North-Western Territory via the United States. The convoy was turned back by the National Committee of the Métis of Red River on 2 November before McDougall could establish his authority at Fort Garry. The Métis were angered that McDougall had sent a team of land surveyors to the Territory before a deal with the Hudson’s Bay Company had been brokered, one of a series of events that precipitated the Red River Resistance.

McDougall became a vocal opponent to the admission of Manitoba to Confederation, arguing that it did not possess a large enough population.

McDougall served on the Ontario–Manitoba boundary commission (1871–72), and then in Europe and Britain as commissioner for fisheries and immigration. In 1872, he married Mary Adelaide Betty, with whom he had another three sons. He resumed his legal practice, allegedly declining a judgeship and the lieutenant-governorship of British Columbia in 1881, and continued to dabble in federal politics as both a Liberal and a Conservative, to the annoyance of both parties. A severe injury to his spine caused by a fall from a moving train in 1890 pushed him to the sidelines. He died in Ottawa on 29 May 1905.

With or without McDougall, western lands would have been acquired and Canada would have expanded westward. His voice, often aligned with the Canada First group represented by Charles Mair, was shrill, and made those who hoped for a more inclusive future realize that the West and the Métis had little choice but to resist. While a brilliant orator and political reformer, McDougall had few natural allies; he is remembered as an aloof character and a self-serving politician.