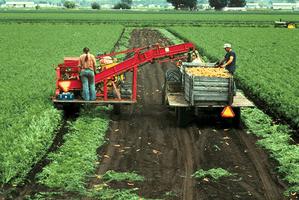 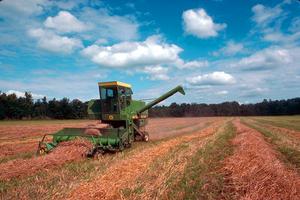 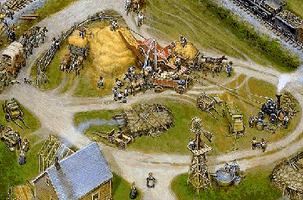 Canadian agriculture changed rapidly between 1850 and 1900, and changes in agricultural implements both caused and reflected changes in other sectors.

In addition to the spade, hoe and rake familiar to modern gardeners, early hand tools used in farming included the seeder, a perforated wooden trough carried by means of a strap around the neck and used in broadcast seeding; the sickle and the scythe, one- and 2-handed knives, respectively, used for cutting field crops and hay; the flail, 2 wooden rods attached by a strap and used to thresh out the kernels of grain; the winnowing tray, a 2-handled, half-moon-shaped receptacle used to cast flailed grain into the air so that the chaff could be blown away; the fork, used for pitching hay or shovelling manure; the wooden grain shovel; the hay knife and hay hook; and the grafting froe, a knife used to split branches in grafting. Most of these implements were superseded; others (eg, the plow) underwent substantial modification.

From wooden-moldboard, single-handled, home-made machines, plows became chilled-steel, mass-produced, scientifically designed 2-handled walking plows; then single-moldboard riding plows, double-moldboard riding plows, and finally giant machines with up to 16 moldboards. These alterations occurred as the source of power changed from oxen (best for root-strewn pioneer farms) to teams of horses, then to multiple teams of horses (up to 16 to a hitch), to steam-driven traction engines with the power of 50 or more horses, and finally to lighter, more versatile but equally powerful gasoline tractors.

Threshing machinery underwent the most dramatic and expensive changes. In 1850 most farmers cut their grain with cradle scythes, and the few short weeks of the harvest dictated the amount grown. In winter, cut grain was threshed on the barn floor, by beating with flails or treading with horses' hooves until the kernel fell free of the straw and was scooped up and winnowed, by the wind or by an artificial wind created by a fanning mill. More efficient machines (eg, the generation of reapers triggered by the inventions of Cyrus McCormick and Obed Hussey in the US and Patrick Bell in England) allowed farmers to harvest larger and larger amounts of grain. Larger threshing machines, initially powered by one- or 2-horse treadmills, and later by immense steam-driven traction engines, began to appear. Mechanical threshers were manufactured by Waterloo, Sawyer-Massey, Hergott, Lobsinger, Moody and other Canadian manufacturers.

Tillage machinery was also improved. Harrows made from tree branches, with iron spikes driven into them, were replaced by various steel-spring harrows that were able to tear freshly turned sod into a weed-free seedbed in much less time.

Rapid change provided opportunities for industrialists. The tiny local blacksmiths' shops of Canadian villages began to increase in size as the demand for iron increased, particularly after the railway boom of the 1850s, which allowed cheap iron to move more easily from England and the US. The demand for iron for engines, rolling stock and track led to the establishment of a sophisticated iron industry in Hamilton, Ontario. Earlier ironmakers (eg, the Van Normans) had relied on poor-grade bog iron. In the 1850s higher-quality iron stimulated the growth of local foundries.

Iron began to replace wood in farm implements. Implement makers grew in number, particularly around the western end of Lake Ontario, where Massey, Verity, Patterson, Wilkinson, Sawyer, Cockshutt, Wisner, Harris and others established their factories, making plows, cutting boxes, fanning mills, seed drills, reapers, mowers, threshing machines and steam engines. Because it was cheap and plentiful, wood was used wherever possible. Iron, however, was essential for cutting and moving parts in general. Larger- and-larger-scale implement makers seemed to sprout up overnight; some of these companies, eg, those that were conservative or undercapitalized, disappeared as quickly; others thrived and continue to dominate the farm machinery industry into the late 20th century.

As one machine was rendered obsolete by the invention of an improvement (eg, the wire binder replacing the sail-reaper and itself replaced by the twine binder), the pace of competition accelerated. A few Canadian companies, eg, the plow maker William H. Verity, specialized in one implement; however, most of the big implement makers produced full lines of farm equipment. The Massey Manufacturing Company (originally established at Bond Head and later relocated at Newcastle, then Toronto, because of the need for a railway supply and delivery system) only made about 50-odd implements in 1847. In 1860 it was making 2 classes of implements: simple machines of Canadian design (eg, straw cutters, harrows, wheelbarrows, fanning mills) and more complicated machines copied from American patents (eg, Manny's Combined Reaper and Mower, Wood's New Self-Raking Reaper, Pitt's Horse Power, Ketchum's Patent Mower). The manufacture of American machines in Canada was a matter of considerable pride and the absence of a patent law, until 1869, encouraged Canadian implement makers to make annual trips to the US in search of new ideas and special rights to manufacture new American inventions.

Markets were strongest in western Ontario, where the rural majority in the 1850s had been able to set aside capital from the high grain prices caused by the Crimean War. In eastern Ontario the number of manufacturers was smaller but still significant, the most prominent being Frost and Wood of Smiths Falls, which survived the period of intense competition in the 1890s. Herring of Napanee, which marketed fanning mills and reapers, eventually folded, as Massey-Harris machines moved into a wider and wider market area after 1891. Not all implement makers stayed in that line of production; eg, the Gibbard Company of Napanee initially made fanning mills and coffins, then began making fine furniture, eventually dropping implement manufacturing completely.

Machine makers in the Maritimes also had a period of growth; however, the market was small and was eventually dominated by the larger Ontario manufacturers, who spread their wares eastward following Confederation. Connell Brothers (Woodstock, NB) and Harris and Allen (Saint John) were successful manufacturers in the Loyalist farming centres. Others could be found in PEI and Nova Scotia.

Québec implement makers were more influenced by European machine patterns and the medieval 2-wheeled plow remained a common sight on Québec farms throughout the 19th century. Since many French Canadians were at least partially agricultural throughout the 19th century, implement makers had many opportunities. Doré et Fils (La Prairie) and Mathew Moody and Sons (Terrebonne) were successful makers of stationary threshing machines and horsepower treadmills in the 20th century; some examples of their machines can still be found in eastern Canada.

The growth of prairie agriculture was a 20th-century phenomenon and, although Winnipeg did attract some implement makers, by the time the prairie market opened up, the eastern implement makers (protected by the high tariffs of the National Policy) were ready to provide the latest open-end binders pioneered by the Harris, Massey and Toronto Reaper companies. The popularity of self-propelled steam traction engines after 1900 demanded a high level of technological sophistication, and American companies (eg, Case, Deere, International Harvester) competed stiffly with Ontario manufacturers. These companies were quick to design and construct bigger and bigger steam engine tractors for the rich prairie grainfields. The threshing machine industry expanded to meet the increased power provided by these steam-engine tractors.

Again Ontario implement makers, with their head start in implement technology, were able to capture most of the new western market and Waterloo, Lobsinger, Sawyer-Massey, Hergott and Bell were soon shipping larger and larger portable threshing machines to the West. Although wooden bodied to begin with, these new dinosaurs of the western prairies soon were made with galvanized metal, and thus were better able to withstand the ravages of time. Many can still be seen abandoned on prairie farms, while their offspring, the combine harvesters, chew their way across the ripening fields of wheat.