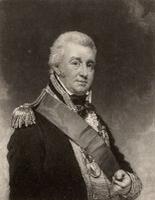 Alexander Forrester Inglis Cochrane, naval officer (b at Scotland 23 Apr 1758; d at Paris, France 26 Jan 1832). A career naval officer whose boldness, skill and success in many campaigns led him to the highest echelons of naval service, Alexander Cochrane is best remembered in Canada for his commanding presence during the War of 1812.

Coming from a family with a proud naval legacy, Cochrane embarked at an early age on a Royal Navy career, making lieutenant by 1778, and served as a signal officer during the attack against the French fleet off the coast of Martinique in 1780, where he was wounded. He was then given command of the St. Lucia, a sloop of war, and later the Pachahunter, before taking command of the armed Avenger in the North River (southern portion of the Hudson River) in North America. By 1782, he attained the rank of post-captain, and was employed in American waters. Briefly retiring from service in the wake of peace after the American War of Independence, he took command of a small frigate when relations with Spain soured in 1790, but was transferred to the 42-gun Thetis when war began with revolutionary France.

Cochrane's reputation as a bold commander soon earned him victories and praise from London. His success as a hunter of French privateers off the American coast continued and he was promoted to command of the 80-gun ship Ajax. He and the Ajax participated in the British convoy and expedition against Napoleon's forces in Egypt. With the capture of Alexandria, Cochrane commanded a detachment of armed vessels to protect approaches to the city. He and the Ajax returned to England in 1802, where he switched his efforts to politics, and briefly became an elected member of parliament. Failing to hold his seat, he returned to naval service.

In 1804, Cochrane commanded the Northumberland in a series of pursuits of French vessels that broke the British blockade before joining up with Lord Nelson's forces to pursue and defeat the Spanish and French fleets. In 1806, Cochrane formed one pillar of the pursuit against the French squadron that had evaded the blockade at Brest and made it to St. Domingo. Cochrane distinguished himself well in the battles and faced the dangers with personal bravery; he even had his hat removed by grape shot from enemy fire. He was made a vice admiral in 1809. In 1810, Cochrane was made governor and commander in chief of Guadalupe until 1813, when the War of 1812 saw his services needed in North America. He was made commander of the North American Station of the Royal Navy in early 1814, and brought to that post his aggressive and unique mindset.

While his predecessors had been interested in securing an armistice with the Americans, Cochrane was adamant that the enemy needed a "complete drubbing" before any peace favourable to Britain could be made. He initiated a blockade against New England and cancelled the license between Nova Scotia and the New England states that Lieutenant General Sir John Sherbrooke had initiated to maintain trade between the warring territories and which had created a short-lived economic boom in the colony.

In what was perhaps his most compelling act, Cochrane also issued a proclamation directed at Black slaves in the United States. He assured them that any slaves who wished to leave the US would find safe passage on Royal Navy vessels, so long as they were willing to serve in the British military or be received as "free settlers" to other colonies. Slaves and their families were allowed to choose which path they desired. Slavery had been abolished in England the previous century, and Cochrane hoped this proclamation would bolster British ranks and hurt the southern US states whose economies were predicated on the use of slave labour. Cochrane's proclamation caused a considerable stir. The escape of many slaves to British ships angered and alarmed the southern American states, and many slaves entered British service when British ships arrived in the Chesapeake Bay on the Atlantic coast. Cochrane organized 600 of them as "Colonial Marines." Many also escaped to Halifax.

Inspiration for "The Star Spangled Banner"

During the Battle of Baltimore, Cochrane led the naval arm of the assault, sending a landing party to surprise the Americans, but they were repulsed. He made history in North America for his decision to bombard Fort McHenry. The sinking of ships in the harbour prevented the British fleet from getting close enough for their bombardment to do serious damage, but it was this assault that inspired American poet Francis Scott Key to write his poem "The Star Spangled Banner," which eventually became the American national anthem. Unable to force the capitulation of the fort, Cochrane and Colonel Brooke agreed that the demonstration of force was sufficient, and Cochrane returned to Halifax.

During the Battle of New Orleans in December 1814, Cochrane commanded the naval support along the Gulf Coast for Major General Sir Edward Pakenham's land forces. Cochrane's fleet included 10 000 soldiers and sailors who anchored in the Gulf of Mexico. Access to the lakes was denied by an American flotilla of five gunboats. At the Battle of Lake Borgne, the British fleet dispatched 42 armed longboats to clear the way and open the river approaches. Cochrane vetoed the army's desire for use of the Chef Menteur Road for a land invasion against the Americans' fortified position, and pushed for the use of his boats. But failures to build proper canals for river transport plagued the invasion, forcing the troops to carry their boats instead of use them. The signing of the Treaty of Ghent ended the war on 24 December, but the news came late to Cochrane and the British, who were defeated at New Orleans, but aimed to renew the fight after capturing Fort Bowyer on 12 February 1815.

Cochrane returned to England after the war, was made admiral in 1819, and was commander in chief at Plymouth from 1821-1824. He died in 1832, leaving behind an impressive and engaging, though not flawless, naval career.