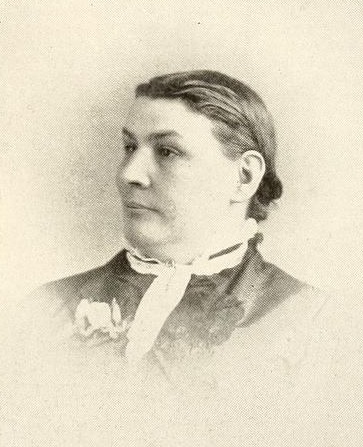 In 1852, at the age of 13, Annie Jack left her home in Northamptonshire, England, to attend Emma Willard School, a girls’ private boarding academy in Troy, New York. She moved to Châteauguay, Quebec, and in 1860 married Robert Jack, a Scottish-Canadian fruit grower. The couple had 12 children: John, Elizabeth, Annie, Mary, William, James, Stanton, Ernest, Norman, Hope, Milton and Ruth. While the majority of Annie’s children lived long lives, Ernest died in 1872, just shy of his first birthday. A poem by Annie published the following year in the Montreal Daily Witness refers to the death of a young child.

Annie Jack and her husband ran a fruit farm called Hillside in Châteauguay. An acre of this farm was set aside for Annie, which she cultivated into an extensive garden of flowers, fruits and vegetables for pocket money and experimentation. Described as a “Mecca,” Annie’s garden became a popular destination for fellow horticulturalists.

Annie Jack wrote and published inspirational short stories and poems, articles of social interest, and practical, wide-ranging horticultural articles. She was best known for the gardening articles she wrote for Montreal newspapers and major horticultural and agricultural magazines of the day, including the Canadian Horticulturalist, Farmer’s Advocate and the Rural New Yorker. A series of articles on social topics published by the Montreal Witness were written under the pen name “Loyal Janet.” Her popular book The Canadian Garden: A Pocket Help for the Amateur (1903) was the only Canadian gardening manual available until the end of the First World War. In it, Jack offers both poetic and practical advice, advising readers that, “In every garden the rose is queen…for it is the flower of our desires and yet so often the flower of our failures,” and to make a rose bed “five feet wide if it is to hold three rows, and let the distance between the roses be twenty-four to twenty-six inches.”

Annie Jack also published five other books: The Little Organist of St. Jerome and Other Stories of Work and Experience (1902); Rhyme-Thoughts for a Canadian Year (1904); Maple Lore (1910); Belated Violets; and The Christmas Hearth.