Annie Pelletier, diver (b at Montréal 22 Dec 1973). Under the supervision of coach Donald Dion she passed through all the steps toward international success. In 1991, she became a member of the Canadian national team. After several Canadian titles in 1 and 3-metre springboard events, she achieved 2nd place in the 1-metre at the World University Games in 1993. The following year, she won 2 gold medals (1and 3 m) in the 1994 Commonwealth Games in Victoria, BC, and in 1995 she dominated the 3-metre event in the Pan American games. In the 1996 Atlanta Olympics Annie Pelletier was only 17th in the qualifying rounds, however she passed to the semi-finals by making up lost time that some thought irretrievable. Her hope to attain the podium required 5 perfect dives in the finals. On the 5th and last dive she earned one of the highest marks for this final feat, winning third place and becoming the 3rd Canadian to win an Olympic medal in diving after Sylvie Bernier (gold 1984), and Irene Macdonald (bronze 1956). Subsequent to Atlanta, Pelletier took up a career on Québec television as a sports commentator for the show La vie est un sport dangereux. Annie Pelletier is also committed to community organizations. 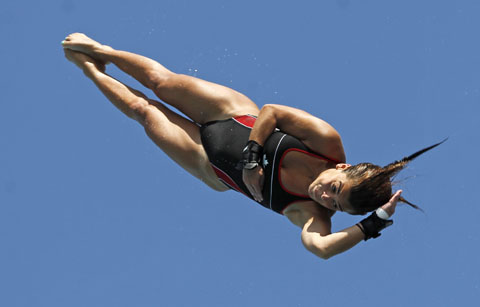