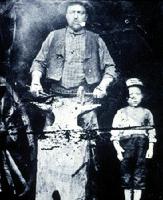 In pre-industrial times, trades were passed on by the apprenticeship system, in which a master craftsman would take a young boy into his home and teach him the skills of his trade, in this case blacksmithing circa 1875 (courtesy Archives, Université Laval, Québec).

Until the mid-19th century, apprenticeship was a system of training that enabled young men or, more rarely, women to acquire the skills of a particular trade or profession. The 3 major means of access to apprenticeship were through institutions, the family or an agreement with a craftsman or professional, ratified by a notarial deed. Although the last form is that most often mentioned in historical accounts, the training of one family member by another appears to have been at least as widespread and was preferred by merchants and the professions (eg, doctors, lawyers, notaries). Very few apprentices were trained in institutions. In the formal and family systems, training was essentially practical and was given in the craftsman's workshop or the professional's office.

From the Middle Ages or earlier, many trades in France and other European countries organized themselves into communities which came to be known as corporations or guilds. The guild system was characterized by the creation among craftsmen of a hierarchy comprising apprentices, journeymen and masters. The masters headed the guilds and elected juries responsible for drawing up and implementing regulations. Among these regulations were those governing apprenticeship and access to mastership: a long training period and an often rigorous entry procedure were imposed on apprentices; journeymen wishing to become masters had to pay a large fee and produce an original work of superior quality, ie, a masterpiece.

When the first French craftsmen arrived in New France in the 17th century, they soon discovered that it was impossible to carry on their strict guild traditions and regulations. There was too much to be done in the new country for them to concentrate solely on their own trade; their time was divided among exercising their craft, clearing the land, fishing and trading furs.

When the first villages sprang up and the training of a core group of craftsmen became necessary, the French system was no longer suitable, because 17th- and 18th-century Canada lacked specialized manpower. Guilds, as they had existed in France, were abandoned; however, the hierarchy and system of practical training were maintained. Members of the professions enjoyed better conditions: already favoured by a higher social rank, they came to Canada in fewer numbers and were able to devote most of their time to their professional duties.

Authorities used official apprenticeship as a means of placing orphans in families and ensuring that they received training in a particular trade. Orphans generally began their training at a much younger age and worked for longer periods than other apprentices. The age of apprentices in the professions was essentially the same as that of craft apprentices, but the length of the training differed considerably. For example, legislation established the training period of lawyers and notaries at 5 years.

Working conditions reveal the characteristics of apprenticeship and the marked differences between craftsmen and professionals. Among 17th-and 18th-century craftsmen, the traditional organization of production and work dominated. With the exception of items produced at the Forges Saint-Maurice and a few large workshops, each piece was the work of one craftsman, master or journeyman, sometimes assisted by an apprentice.

Craftsmen generally worked in small workshops (often attached to their homes) and owned all their tools. Work was usually done to order and division of labour was almost nonexistent. The major sources of energy were still muscle power and water; raw materials were processed mainly by hand tools.

Under this system, working relations were not defined solely on the basis of labour supply and demand as today but also in terms of rights, obligations, and personal relationships which were often very authoritarian in nature. Contracts stipulated that the apprentice obey the master, work on his behalf and strive to learn his trade. In return, the master agreed to reveal all the secrets of his craft and provide accommodation, food, clothing and a small annual salary, paid either in cash or in kind.

The apprentice worked 6 days a week, his hours varying depending on the trade and whether it was practised indoors or outdoors. Working days were generally from 5 AM to 8 or 9 PM, with a minimum of 2 hours for lunch and dinner. Apprentices worked 12-14 hours a day, a little longer than the journeyman or master, since they had to prepare the others' work before the shop opened and had to clean up after closing. Some apprentices in the 17th and 18th centuries received religious and academic as well as technical training.

Once the apprenticeship period was over, young workers might work for a few years as journeymen and then open their own shops when they had enough money; others inherited their fathers' shops. The journeyman's salary was 4-6 times greater than that of the apprentice. At this intermediate stage, the journeyman entered the job market and made products of his own. Some journeymen trained apprentices or were responsible for the internal operation of the workshop in the master's absence.

Changes in the Nineteenth Century

The economic boom of the early 19th century, certain British influences and the process of urbanization provoked irreversible changes in manufacturing, work organization and conditions of apprenticeship. In order to meet the competition from imported products in the expanding local market, many master craftsmen also acted as merchants and manufacturers and modified their production methods. They used machine tools, grouped several craftsmen together under the same roof, shared tasks and were thus able to hire unskilled labour to make products on a large scale. This development marked the transition from individual artisan to workshop and, subsequently, to factory production in urban centres. The transition was a long and complex process spread over nearly the entire 19th century and craftsmen's workshops and factories co-existed for a long time.

These major changes affected the role of traditional apprenticeship in the work force and society. Apprentices gradually became a source of cheap manpower and were hired more for their labour than for training purposes. They were hired at increasingly younger ages and their contracts were prolonged and expanded to embrace several tasks so that they could be used as cheap labour for longer periods. The traditional responsibilities of masters (support and moral and religious education) were replaced by a cash payment. Some masters failed to teach apprentices "the secrets of the trade"; others mistreated them. Apprentices often ran away, since they had difficulty breaking their contracts. If caught, they were prosecuted.

While the traditional apprenticeship system deteriorated, other institutions increased in importance. At the beginning of the 19th century, evening schools began to replace the education previously given by the master and his wife. In order to have more control over the education of apprentices and young journeymen, masters and merchants followed the example of their counterparts in Great Britain and established technical institutes in the major cities of eastern Canada (Halifax, Québec City and Montréal). These institutes were viewed by the authorities as training centres where workers could learn respect for the establishment, discipline in the workplace and proper social behaviour.

Sunday schools and temperance groups, established during the first half of the 19th century, supported the institutes in the pursuit of a common goal: to teach workers how to use their leisure time so that they would put more effort into their work. During the second half of the 19th century, technical institutes partly replaced workshops as the place in which training was provided.

The founding of the first unions in the 1830s and professional corporations in the late 1840s resulted, in part, from a desire to control access to occupations and to protect their members. With the exception of the construction trades and the professions, which succeeded in limiting the number of apprentices, trades (eg, shoe making, coopering, tinsmithing) were threatened by technological change.

Schools gradually took over responsibility for training professionals; hence, the creation of professional associations (eg, of doctors and notaries) gave professionals an opportunity to control not only the quality of education but also the number of graduates (see Education, History of). Although government authorities first feared giving so much power to doctors and notaries, these 2 professional groups were granted such powers (in 1845 and 1847) after applying considerable pressure.