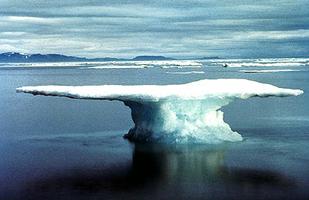 In Eclipse Sound in the Arctic Ocean (photo by Barbara Brundege and Eugene Fisher).

The study of oceanography reveals information about the origin, composition and movements of marine waters; ocean basins; interactions with the atmosphere; and the living organisms of the sea, ie, the plants and successive levels of animals that feed on them (see Marine Ecology). The seas of the Canadian Arctic (here defined as reaching from the Labrador Sea in the east to the Beaufort Sea in the west) are covered by ice for more than half the year. Cold, arctic surface water, originating in the upper 200-300 m of the Arctic Ocean, flows out of the Arctic basin through the Canadian Arctic Archipelago and between Canada and Greenland towards the Atlantic Ocean. In Baffin Bay, Davis Strait and neighbouring regions, it mixes with warmer water from the Atlantic to form subarctic water.

The Subarctic covers a relatively large area in eastern Canada; its western counterpart, formed where Pacific and Arctic waters meet and mix, is restricted to a narrow band along the shore of the Beaufort Sea (see Coastal Waters). Oceanographic information is obtained from the Arctic for many users, including navigators, hunters and fishermen, petroleum and mine developers, traders and climatologists.

Danish scientists aboard the vessel Godthaab and Americans on the Marion began oceanographic investigation of waters bordering the eastern Canadian Arctic long before comparable Canadian efforts were launched. In 1930 the Hudson Bay Fisheries Expedition (under H.B. Hachey), supported by the federal government, provided the first extensive account of circulation and general Physical oceanography of the Canadian Arctic.

In 1948 the Canadian government responded to a need for expanded Canadian oceanographic effort in the Arctic with establishment of the Eastern Arctic Investigations (now the Arctic Biological Station, Ste-Anne-de-Bellevue, Québec). The 15 m research vessel Calanus was built in NS in 1948, and a program, mainly of biological oceanography, was begun in the eastern Arctic. M.J. Dunbar was in charge of the survey. In the western Arctic, G.L. Pickard in 1949 participated in a program in the Bering and Chukchi seas with the US Naval Electronics Laboratory.

Co-operative research with US oceanographers began in the early 1950s in the Beaufort Sea. W.M. Maxwell, of the Defence Research Board, played a significant role in this research and survey work. In 1954 HMCS Labrador completed a cruise that linked the eastern and western Arctic through the Northwest Passage, culminating in a circumnavigation of North America; a series of eastern arctic cruises followed.

The Polar Continental Shelf Project began in 1959, supporting a wide variety of arctic research projects, including oceanography; this organization continues to provide valuable service. In the same decade, Canadians joined American oceanographers on Ice Island T-3 in the Arctic Ocean. In the 1960s the Frozen Sea Research Group began work; the group was based at the Institute of Ocean Sciences, Victoria. The Bedford Institute of Oceanography participated in oceanographic surveys in the eastern and central Arctic during the early 1960s, and in 1969-70 continued with the more spectacular Hudson cruise around the Americas. A portion of that cruise was spent in the Beaufort Sea.

Hudson (built 1963) was the first Canadian vessel specially built for oceanographic research. More recently, multidisciplinary ship-based studies have been carried out by the Bedford Institute in the eastern Arctic.

The 1970s saw the beginning of a period of oceanographic study encouraged, at least partly, by questions of possible effects of oil and natural gas exploration on the environment. Studies were concerned with the effects of ocean currents, ocean waves and sea ice on vessels and fixed installations, and conversely with the impact of vessels and drill sites on the environment (eg, consequences of oil spills on the biota of arctic seas). The period marked the appearance of a high level of nongovernment funding of oceanographic research and the growth of private consultants in a field largely occupied until that time by government-sponsored researchers.

The first major study of the new era was the Beaufort Sea Project, jointly sponsored by government and the petroleum industry and comprising some 40 projects dealing with all major divisions of oceanography. Other studies followed, including the Eastern Arctic Marine Environmental Studies program (EAMES) in Baffin Bay and Davis Strait, the Offshore Labrador Biological Studies program (OLABS) and the Baffin Island Oil Spill project (BIOS).

In recent years, Canadian oceanographers have participated in a number of arctic studies outside Canadian waters, most of them being international co-operative undertakings. Among them are AIDJEX (Arctic Ice Dynamics Joint Experiment), a Canada-US oceanographic program in the Beaufort Sea; LOREX (Lomonosov Ridge Experiment), FRAM (a series of studies named after the vessel of arctic explorer Fridtjof Nansen), EUBEX (Eurasian Basin Survey) and CESAR, all located in the Arctic Basin; and MIZEX (Marginal Ice Zone Experiment), involving several countries off the East Greenland and Alaskan coasts.