His father, a violin maker and teacher, gave him his first lessons along with his first violin at the age of three. The museum of the University of Moncton has two violins made by Joseph LeBlanc for his son. Arthur spent his youth in Moncton except for three years in the Boston area (Cambridge), where his father owned a music store. At five he was acclaimed a prodigy by the critics, and he gave his first concert at the age of 10 at the Moncton Opera House. He studied 1914-23 at the Séminaire de Québec, where members of the clergy helped to defray his expenses.

Father Pierre-Chrysologue Desrochers (who conducted the orchestra at the seminary) and the violinist Joseph-Alexandre Gilbert helped launch his career, and he gave five public concerts early in 1921, including one to the members of the Club musical and another as soloist of the Société symphonique (Quebec Symphony Orchestra). A pupil of Gilbert, he was one of the first to enrol at the School of Music at Laval University in 1922. Rejoining his family in Boston in 1923, he toured New England with the singer Désiré Bourque, and then studied at the New England Cons for two years with Richard Burgin, concertmaster of the Boston SO, and with Felix Winternitz. He also studied in New York with Bernard Sinsheimer.

On a Quebec government grant in 1930, LeBlanc studied at the École normale de Paris with Georges Enesco, Maurice Hayot, and Jacques Thibaud. While a member of the orchestra there he performed as a soloist under Cortot. In 1934 he passed his performance examination with great distinction, earning an extensive tour during which he played in Liège, Basel, Geneva, Lausanne, and Le Havre. He was a member of the first violins in the Paris SO during the 1935-6 season under Pierre Monteux.

LeBlanc returned to Canada in 1938 and performed the Brahms Concerto 3 Feb 1939 with the Concerts symphoniques de Montréal. That May he made his debut at Town Hall, New York, and in July and November he appeared at Carnegie Hall. 'Mr. LeBlanc possessed the well developed technique expected from any concert performer,' wrote the New York Times critic, 'but what made his work quite unusual was the extreme beauty and purity of his tone and the rich fund of expressiveness that helped to give his performances true distinction' (27 Nov 1939). 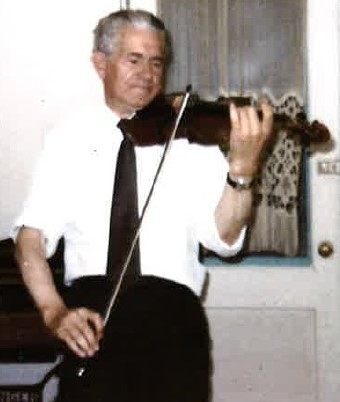 Accompanied by either Jean-Marie Beaudet or Ross Pratt, LeBlanc performed in many Canadian towns. Managed 1941-6 by the US agency Columbia Concerts, he appeared in the USA both alone and with such artists as Rose Bampton, Richard Crooks, Gregor Piatigorsky, and Bidú Sayão. He performed 6 Dec 1941 before President Roosevelt at the White House and in 1944-5 gave 26 concerts in six weeks.

Milhaud composed his Concerto No. 2 for LeBlanc in 1946, and the violinist gave its premiere in 1948 at the Théâtre des Champs-Elysées with the Concert Society of the Paris Cons under André Cluytens. Its North American premiere, in which he performed with the MSO under Désiré Defauw, took place 13 Jan 1953.

LeBlanc also taught, in particular at Laval University and 1943-7 at the CMM. Poor health obliged him to curtail his travelling after 1953, but he continued his career through radio and TV performances, working with John Newmark or Charles Reiner. He played Schumann's Fantasia and Saint-Saëns' Havanaise 12 Jun 1955 with the CBC 'Little Symphonies' Orchestra. His last public appearance occurred in 1965 at the JMC Orford Art Centre with Charles Reiner as accompanist. LeBlanc recorded programs with Charles Reiner for RCI and Acadia from the mid-1950s to the mid-1960s.

LeBlanc was a composition pupil of Paul Dukas and Nadia Boulanger and wrote a few works, including the Petite Suite canadienne for violin and piano, one movement of which, 'Chant des pins,' often appeared on his programs.

In 1938 LeBlanc acquired a Guadagnini instrument, which he broke in an unfortunate accident in 1941 just before a recital in Quebec City. A public subscription in 1946, to which the Sorel businessman and patron Ludger Simard had generously contributed, allowed him to buy the 1733 Stradivarius called 'Des Rosiers' after the Lyons family who had owned it for more than 100 years. This violin and another instrument "the Stanley" were stolen from LeBlanc's home on île d'Orléans in 1975, but fortunately recovered several weeks later.

The Stradivarius, sold to the family of violinist Angèle Dubeau in 1977, was the subject of a court action in 1986 by the Simard heirs who claimed ownership. The following year the Superior Court of Quebec acknowledged the Dubeau family as the rightful owner of the instrument. In 2013, Dubeau maintained ownership and continued to play the instrument which she named "Arthur". LeBlanc had also acquired the Tourte bow given to Wieniawski by the Austrian emperor.

In 1987, LeBlanc's name was given to a mountain east of Chicoutimi. A string quartet named after LeBlanc affiliated with University of Moncton, was founded in 1985. In 1988, with support from the U of Moncton, the NB government, the Canada Council and the CBC the Quatuor Arthur-LeBlanc was officially formed, and in 2013 continued an active professional career.

The Fonds Artur LeBlanc was acquired by the U of Moncton in 1982/83.