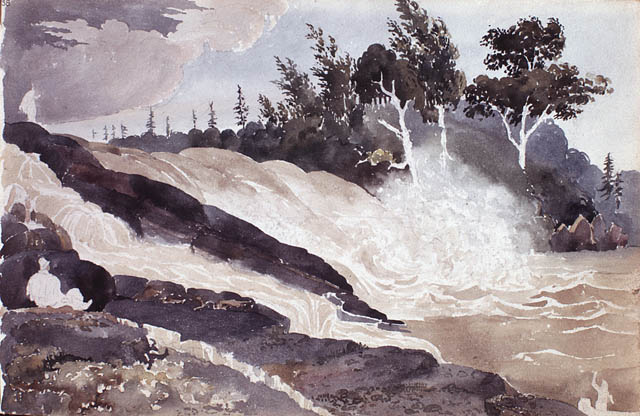 Sir George Back documented northern landscapes in his workbooks as he travelled with the Franklin Expeditions from 1818 to 1837.

Tattannoeuck (Inuktitut for “it is full” or “the belly,” also known as Augustus), Inuit hunter, interpreter (born in the late 1700s, north of Churchill, MB; died in late February or early March 1834 near Fort Resolution, NT). Noted for his loyalty, integrity and outstanding capabilities as an interpreter, Augustus accompanied Sir John Franklin on his early Arctic explorations.

From 1812 to 1816, Tattannoeuck was employed as an interpreter for the Hudson's Bay Company (HBC) in what is now Manitoba at Fort Churchill. In 1820, Tattannoeuck joined Sir John Franklin's first land expedition to the Arctic (see Arctic Exploration). A year later, the expedition landed in Fort Enterprise, Northwest Territories. Travelling with Franklin until May 1822, Tattannoeuck, and fellow Inuk interpreter Hoeootoerock (also known as Junius), traveled ahead of the expedition, making initial contact with Inuit villages. The return to Fort Enterprise was challenging; many of the explorers died of starvation and exposure to the harsh Arctic weather. During this journey, Hoeootoerock was lost and presumed dead.

In 1822, Tattannoeuck returned home and resumed working for the HBC. The following spring, he joined Franklin on his second expedition to the Arctic. On 7 July 1826, Franklin’s party encountered several hundred Inuit, who pillaged Franklin’s two boats. That night, Tattannoeuck ventured alone to speak with 40 of the Inuit who had attacked the expedition. Tattannoeuck tried to convince the Inuit that it was better to trade with the Europeans than to attack them. However, Franklin was not willing to risk another possible attack and left the area soon after. In 1827, Tattannoeuck left Franklin’s expedition and took up work as an interpreter and hunter in Fort Churchill, NT, and Fort Chimo, Québec.

In late 1833, Tattannoeuck learned that Sir George Back, a member of the Franklin expeditions, was mounting a search party to find a lost fellow explorer, Captain John Ross. On his way to meet Back at Fort Reliance, NT, in 1834, Tattannoeuck lost his way and perished at Rivière-à-Jean, QC, approximately 20 miles from Fort Resolution, NT.

In honour of Tattannoeuck’s services to Franklin, a species of butterfly — Theta augustus (now classified as Incisalia augustus) — was named after him. Augustus Lake in the Northwest Territories also bears his name.