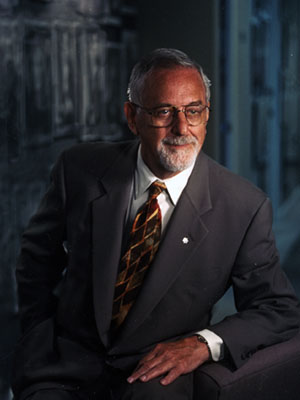 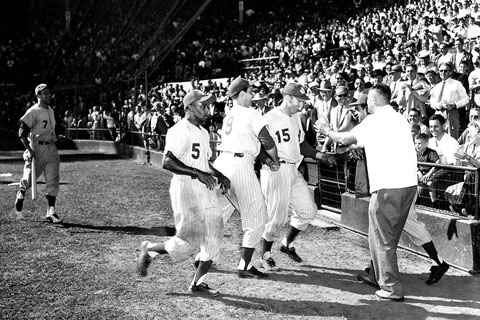 In the photograph are #7 Lou Kahn, #5 Hector Rodriguez, #19 Don Johnson, and #15 Archie Wilson. To the right is Avie Bennett with his son Paul on his lap, c 1950s (courtesy Paul Bennett).
PreviousNext

In 1985 Avie Bennett purchased the esteemed Canadian publishing company of McClelland & Stewart (headed since 1953 by the legendary Jack McClelland and perceived by many as the flagship of cultural nationalism), rescuing it from the brink of financial disaster. During Bennett's adroit, 14-year management he nurtured the company's commitment to Canadian titles, winning the respect of authors and publishers in Canada and abroad. He published roughly 100 titles a year by major authors such as Margaret Atwood, Leonard Cohen, Robertson Davies, Mavis Gallant, Rohinton Mistry, W. O. Mitchell, Alice Munro and Michael Ondaatje. In 1991 he acquired Hurtig Publishers of Edmonton, publisher of The Canadian Encyclopedia, and in 1995 he bought Tundra, the highly respected Montreal-based publisher of children's books. Bennett encouraged the encyclopedia's conversion to a CD-ROM format with yearly updating and in 2000 donated it to the Historica Foundation of Canada. It is now available online in both English and French, free of charge to all Canadians.

On 26 June 2000, Bennett announced that he had organized a change of ownership of McClelland & Stewart. With no Canadian company interested in taking it over, and prohibited by federal legislation from selling majority control to a foreign firm, Bennett structured an innovative deal that ensured the integrity of McClelland & Stewart while raising necessary funds for continued investment. Under its terms, Bennett donated 75% of McClelland & Stewart's publishing arm to the University of Toronto, which would use the revenues generated to establish an endowment in support of Canadian culture. Random House of Canada, a wing of the giant German-owned Bertelsmann AG company, acquired the remaining quarter. The University of Toronto controls five of the seven seats on the Board of Directors and Bennett remains as Chairman of the Board. Bennett was appointed as Chairman of the Board of Directors of the Historica Foundation (now Historica Canada) in 2003, assuming the position from John Cleghorn, and led its merger with the Dominion Institute in September 2009. He retired from the organization in 2011.

In 2000 Bennett took on the issue of corporate responsibility, co-chairing (with Ed Broadbent) the privately funded Canadian Democracy and Corporate Accountability Commission. Their January 2002 report, based on cross-country hearings, called for greater corporate social responsibility at both national and international levels. Bennett, a successful businessman for more than 40 years, was castigated by some observers for his role in advocating that corporations meet standards of behaviour with regard to human rights, the environment and consumer protection. For others, however, he not only gauged public sentiment correctly but articulated it in a series of farsighted recommendations.

Avie Bennett received several honours in recognition of his work, including the Order of Ontario in 1996. In 1991 Bennett was appointed as a Member of the Order of Canada; in 1997 he was promoted to the rank of Officer within the Order of Canada; and in 2003 he was given a further promotion to the rank of Companion. In 1995 he was made a Doctor of Laws, honoris causa, by the University of Toronto; he was made a Doctor of the University at the University of Ottawa in 1997 and a Doctor of Letters by York University in 2004. In 1998 he was named Chancellor of York University; he retired in 2004 and continued to serve as Chancellor Emeritus and a member of the Board of Directors of the York University Foundation. As Chancellor Emeritus, Bennett established the Avie Bennett Historica Institute Chair to promote the study of Canadian history. In recognition of his support of York University the Student Services Centre at York's Keele campus was renamed the Bennett Centre for Student Services in 2006.