City and town dwellers in turn-of-the-twentieth-century Canada knew one thing for sure about Englishmen: there were too many of them around. The "For Hire" signs in shop windows said it all: "Englishmen Need Not Apply."

But in Britain, there were thousands of people who wanted to start a new life: soldiers home from the Boer War; farmers unable to own the land they worked; butchers and bank clerks facing a lifetime empty of adventure. What better place to start anew than the senior Dominion of the British Empire?

Clifford Sifton, Minister of the Interior in Wilfrid Laurier's Liberal government, wanted to settle the organized Northwest Territories - Alberta, Saskatchewan, Athabasca and Assiniboia - with British farmers. They were, according to Sifton, better than imperialistic Americans; better than Eastern and Southern Europeans who were, after all, foreign and probably Catholic; and, most certainly, better than Blacks, Jews and Asians whose very origins made them unsuitable for farming.

It was not surprising then that the Canadian commissioner of immigration paid attention to the letter he received in his London office in August 1902 from an unknown clergyman named Isaac Barr. The Reverend Barr offered to help English farming families settle on the Canadian prairies. When the commissioner agreed to pay for a pamphlet, Barr told the English press that he had the commissioner's endorsement. Newspaper readers concluded that the Canadian government supported Barr's scheme and the All-British Colony was born.

By February 1903, almost 2000 people had signed up. Barr had been to the prairies to inspect a parcel of land between Battleford and Edmonton, and the Reverend George Exton Lloyd had joined the Colony.

While Barr's past had been one of unhappy bishops, far-fetched schemes and unsuccessful marriages, Lloyd's was exemplary. Though British, he had studied at the University of Toronto and served with the Queen's Own Rifles during the Northwest Rebellion.

But Barr was in charge when, on March 31, 1903, the S.S. Lake Manitoba sailed from Liverpool. The former troop ship had been built to carry 700 soldiers; now 1960 men, women and children crammed themselves on board with an enormous amount of luggage including sewing machines, pianos, china, carpets and whatever else green Englishmen deemed necessary for survival.

And green they were. Though Barr had promised that the majority of his colonists would be farmers, only about 400 really were. The rest were townsfolk: warehousemen, dressmakers, jewellers, furnacemen, caterers. When they left the train that had brought them across the country from the docks of Saint John to the shacks of Saskatoon, many of them had never driven a horse let alone harnessed one to a plow.

Their transformation into farmers began on the 320-kilometre trek north and west to colony headquarters. They learned to pitch tents, dig for potable water, cook bannock over a campfire, battle mosquitoes and rescue oxen and horses from the mire of one slough after another. Steeply sided creek beds and raging prairie fires did not stop them. Through scarlet fever, diarrhea and the birth of babies - the All-British Colony persevered.

By the time the last straggler stumbled into Headquarters Camp, angry colonists had kicked Isaac Barr out, George Lloyd had taken his place, and, for better or worse, most of the people had found their free 160-acre homesteads.

Within three years they would have to prove these homesteads by building a house and ploughing 15 acres of tough prairie sod, but for now they were content to pull their finery from their steamer trunks and while away the warm days with dances, picnics and rodeos.

Reality set in when an early September frost killed most of the vegetables in their gardens. Men who had never used a saw struggled to build houses from the spindly poplars that grew around sloughs or from sods hand cut into squares. Animals needed stables; humans needed warm clothes and boots; stoves needed a winter's worth of firewood.

But a log church, a restaurant and a bathhouse gave a hint of civilization to the new town named Lloydminster in honour of the new leader. The Canadian government, which had been especially helpful to the large and press-savvy colony, stepped in once again to finance the building of an immigration hall, which provided work for needy settlers and accommodation for the ones whose houses had not withstood the unseasonably cold winter.

By the time spring arrived, four people had died of exposure. But the All-British Colony was "on the land to hold it." A year later the border between the new provinces of Alberta and Saskatchewan would split Lloydminster down the middle. Most of the colonists would become farmers; the rest would sell their land to newly arrived Ukrainians and become businessmen in Lloydminster - townsfolk once more. 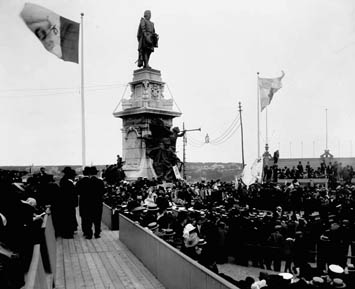