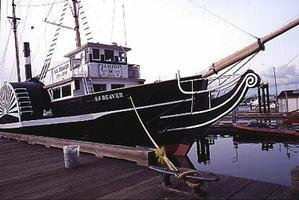 The wooden paddle steamer was the first steamship on the Northwest Coast.

Beaver, wooden paddle steamer - the first steamship on the Northwest Coast. It was launched 2 May 1835 near London, England, and sailed to the Columbia River in 204 days, arriving at Vancouver 10 April 1836. The Beaver served as a supply ship for the Hudson's Bay Company until the Fraser River Gold Rush of 1858, when it entered passenger and freight service between Victoria and the mainland.

From 1862 to 1874 the HBC trader became Her Majesty's Hired Survey Ship Beaver. After the HBC sold the ship in 1874, it was used as a workhorse and tow until 1888, when it was wrecked in the First Narrows in Vancouver harbour. Only a few relics remain.