Becky Buhay immigrated to Canada in 1912. She became active in Montreal socialist causes during the First World War. After studying at the radical Rand School of Social Science in New York City, she became an organizer in Montreal garment unions. She joined the Workers’ Party of Canada, likely in 1921.

Did you know?
The Workers’ Party of Canada was first conceived in 1921 at a secret meeting in a barn in Guelph, Ontario. Gathered there were 21 Canadians and three representatives from Communist International, an organization dedicated to creating a global state led by the Soviet Union. This group established the Workers’ Party in February 1922. Two years later, it rebranded itself as the Communist Party of Canada.

In the 1920s and 1930s, Buhay toured and lectured. She taught at party schools in western and central Canada. In the early 1920s in Alberta, she helped organize the striking coal miners’ wives in the Women’s Labour Leagues (see also Coal Mining). With her friend Annie Buller, she was active in the free speech fights in Toronto in 1929–31. She succeeded Florence Custance as secretary of the Canadian Labor Defence League and head of the Women’s Department in 1929. She wrote and spoke about women’s role in the struggle for socialism. Buhay also headed a Canadian women’s delegation to the USSR in the early 1930s.

During the Second World War, she worked to free interned communists. After the war, she resumed her educational work for the party. She was revered among colleagues for her ability to communicate radical ideas, her loyalty and dedication to the communist movement. 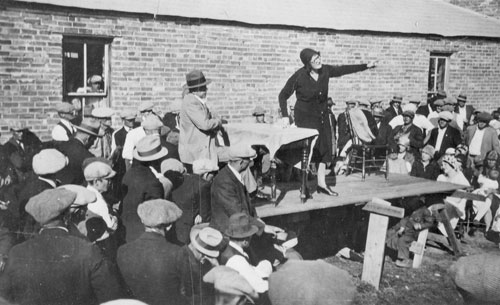