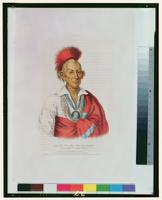 Black Hawk (Black Sparrow Hawk, Makataimeshekiakiak), Sauk War Chief (b at Saukenuk, near Rock Island, Ill, 1767; d near Des Moines, Iowa, 3 Oct 1838). According to Sauk oral history, Black Hawk was a direct descendant of Thunder (Nanamakee), who was said to have had contact with an early French explorer, possibly Samuel de Champlain. Black Hawk earned the title of War Chief in the wars with the Osages (1782-1787). The 1804 Treaty of St. Louis, signed between Governor William Henry Harrison and Sauk chief Quashquame, ceded most of Sauk and Mesquakie territory to the United States. Black Hawk and other chieftains rejected the validity of the treaty, arguing that not all chiefs of the two nations had been consulted. The full tribal councils had not been involved in negotiations, and Quashquame did not have the legal right to cede land. Black Hawk led the resistance against American attempts to settle the land, leading an attack on Fort Madison in July of 1809.

With the outbreak of the War of 1812 between the United States and Britain, Black Hawk joined a large war party of First Nations led by Robert Dickson. Dickson had lived with the Sisseton Lakota (Minnesota Sioux) and was known as Mascotopah (The Red-haired One). As a Lakota War Chief, Dickson had assembled a mixed force of Lakota, Potawatomi, Winnebago and Ottawa to support the British in the war against the Americans. Black Hawk commanded a force of 200 Sauk warriors. Both Dickson (colonel) and Black Hawk (captain) received temporary commissions in the British Army.

Black Hawk led the Sauk during the capture of Fort Mackinac on Michilimackinac Island, 16 July 1812. He and Dickson supported a contingent of British infantry and Lower Canadian militia commanded by Captain Charles Roberts. After the capture of Fort Mackinac, Dickson promoted Black Hawk to the brevet rank of brigadier general. Black Hawk led the Sauk at both sieges of Fort Meigs (1-9 May, 25 July - 2 August 1813) alongside Tecumseh and Major General Henry Procter, and the attack on Fort Stephenson. Procter and Tecumseh failed to storm either fort, and retreated back to Amherstburg. With the defeat of Procter and the death of Tecumseh at Moraviantown (also known as the Battle of the Thames) Black Hawk concentrated his efforts south of the Great Lakes.

Black Hawk continued to resist American expansion after the signing of The Treaty of Ghent. Leading the Sauk and Mesquakie, Black Hawk defeated an American force at the Battle of Sinkhole (24 May 1815). He finally negotiated a treaty with the American government in 1816, re-affirming the terms of the 1804 Treaty of St. Louis.

Black Hawk led the failed resistance to American expansion into Sauk territory during the "Black Hawk War" (14 May - 2 August 1832). Greatly outnumbered, Black Hawk's force was defeated at the Battles of Wisconsin Heights (21 July) and Bad Axe (2 August). Subsequently, the American government forcibly relocated the Sauk and Mesquakie to the Kansas Territory. Black Hawk lived with the few remaining Sauk in a small village near present-day Des Moines, Iowa, where he died in 1838.