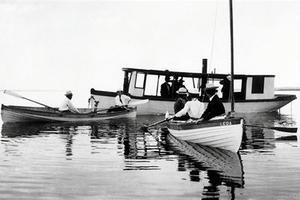 Canadians are among the most active boaters in the world: over 50% or 13 million people go boating each year in some form of recreational craft. Canadians own 2.3 million boats, ranging from canoes to yachts over 20 m - more than twice the number of boats per capita compared with the US. Each year, boating generates over $2.5 billion of direct expenditure.

Despite the limitations on year-round boating imposed by climate everywhere except on the West Coast, Canada has many natural resources that encourage this activity. Canada has more fresh water than any other nation, dotted in a myriad of lakes and streams across the country, some of the longest rivers in the world, which stretch into the far corners of the land, and sea coasts bordering on 2 large oceans.

Historically, Canadians lived by and travelled on the water. The first inhabitants developed many unique boat designs ranging from skin or bark canoes to magnificent ocean-going boats capable of extended voyages. The early explorers and traders were quick to realize the usefulness of native craft and adopted them as their own.

Each year the Hudson's Bay Co, North West Co and others arranged shipment of their goods by water over vast distances and, by necessity, began to modify the canoe to their needs. The first boat factories utilizing specialized production-line techniques were set up in the late 18th century in Québec to meet the demands for canoes.

By the mid-19th century, boating flourished at all levels of society. While many people enjoyed the pleasures of a canoe or pulling boat, those of more substantial means lavished money on sleek racing craft and on the wagers accompanying them. Clubs catering to these pleasures were formed for all types of boats, and organized competitions for members became common.

Not content with local endeavour, Canadians soon became prominent on the world stage. Ned Hanlan won the world champion sculling competition in 1880; Canada challenged twice for the America's Cup, in 1876 and 1881; and in 1896 a yacht appropriately named Canada won a trophy on the Great Lakes, emblematic to this day of yachting rivalry between Canada and the US.

Boating became mechanized around the turn of the century. Factories were built using sophisticated methods to satisfy the increasing demand for boats, and engines became available to propel craft of all kinds. Though small steamboats had been used for some time, the gas engine revolutionized boating and culminated in the outboard motor we know today.

Materials and techniques developed for other uses, particularly fiberglass and aluminum, were adapted to boat construction. In 1950 there were 72 558 licensed boats in Canada. Only those boats with engines over 7.4 kW (10 hp) require a licence, so this figure represents but a portion of the boats. Today, well over 1 million licences have been issued. Almost all of these boats have been constructed of either fiberglass or aluminum.

In the 1990s the small outboard was the most popular boat, accounting for about 45% of the total. Easily operated or transported, it provides millions of fishermen, hunters, waterskiers and casual boaters with enjoyment. The canoe comprises 30% of all Canadian boats; it can go almost anywhere and is inexpensive. Rowboats, long in the shadow of powerboats, are finding new interest among fitness devotees. Sailboats, often the most dramatic and visible of all watercraft, total 10% of Canada's fleet.

Once the preserve of the wealthy or the working fisherman, sailboats were revolutionized by the use of fiberglass. Thousands of people now have access to sleek, well-designed, economical and durable boats. In this field, in particular, Canadian manufacturers have been quite successful; one of every 2 sailboats built in Canada is exported, generating $60 million each year in foreign sales.

Larger powerboats with inboard-outboard or inboard engines make up about 6% of all boats. Various concerns about fuel consumption have led to improvements in hull design, and careful attention to styling and detail have created new demand.

Boaters in Canada operate under the Canada Shipping Act and Small Vessel Regulations. Both of these are administered by the federal Department of Transport through the Canadian Coast Guard, though in many instances local enforcement is carried out by police forces. These groups, in conjunction with the Department of National Defence and many volunteers, provide search-and-rescue services across Canada.

Working in close conjunction with the government are several associations of boaters often grouped by interests into national bodies. The Canadian Yachting Association and the Canadian Power and Sail Squadrons cater to sailors and powerboaters from coast to coast and have developed broad courses for teaching seamanship and navigation. Other groups involved in similar activities include the Canadian Boating Federation, which also governs powerboat racing in Canada, the Canadian Red Cross Society and the Royal Life Saving Society Canada.

In addition to their interests in teaching boating, several of these groups also administer the sporting aspects of boating. Recent victories by Canadian sailors have put them in the forefront of Olympic and Pan-American competition. Canada challenged for the America's Cup in 1983 and 1987 and had creditable finishes both years. Canadian athletes have seen considerable success in canoeing and rowing competitions. In 3 successive years, 1959-61, Miss Supertest won the Harmsworth Trophy for hydroplanes.

Canada's geography provides unequalled opportunities for boating, which Canadians have taken up without reservation.