Bridgewater, NS, incorporated as a town in1899, population 8241 (2011c), 7944 (2006c). The Town of Bridgewater is located at the head of navigation on the LaHave River, 16 km from its mouth. Pierre du Gua de Monts visited the area in 1604 and a small French settlement existed at the river's mouth from 1632-54. British colonization brought German and French-speaking Protestants to settle nearby Lunenburg in 1753. The actual founding of this community dates from 1874 when the lots were surveyed. As this was the main bridging point of the LaHave, it was called Bridgewater.

A pluralistic society slowly took form, growing in response to the demand for the area's timber. The Davison sawmill, one of the largest in Canada, employed some 350 men late in the 19th century. Shipping and the central railway yard were important from 1890 well into the 20th century.

The lumber and pulpwood industry remains important, but a Michelin tire plant, established in 1969-70 is now the mainstay of the economy. The provision of regional services also supports the local economy. Bridgewater has a weekly newspaper and hosts an annual agricultural fair.

A disastrous fire on 12 January 1899 destroyed the downtown area and commercial development has replaced much of the town's built heritage, but remaining domestic architecture records New England and Victorian influences. The Wile Carding Mill is part of the industrial heritage of the town. The DesBrisay Museum is one of Canada's oldest historic museum collections. The collection dates from the 1880s and the museum opened in 1902. Country singer Carroll Baker was born in Bridgewater. 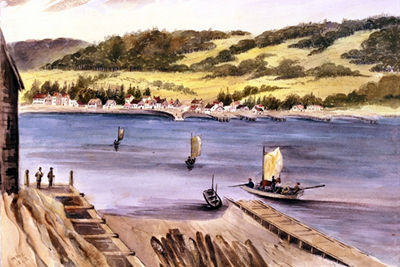