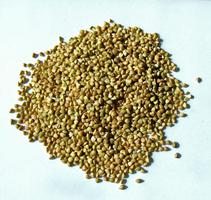 The plant consists of a single main stem (smooth, grooved and hollow), several branches and a shallow taproot system. The dark green leaves are heart-shaped. Flower clusters (usually white, sometimes pink) are found at branch ends or arise from axils of leaves. The seed, an achene (dry one-seeded fruit), is triangular and varies in colour from brown to grey to black.

Buckwheat is grown mainly for human consumption (eg, flour for pancake mixes, bread and ethnic dishes, breakfast cereal) and is also used for livestock and poultry feed, as a green-manure crop, as a smother crop and as a source of buckwheat honey. In Canada it is grown mainly in Manitoba (53%) and in Québec (47%). Its importance as a cash crop has decreased. In 1986, of the 38 000 t produced, 20% was exported and the remainder was consumed in Canada.