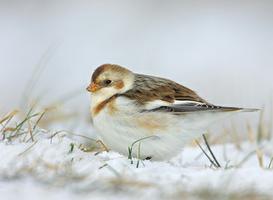 Bunting is a common name for several not particularly closely related members of the order Passeriformes (perching birds). Four species are included in this group: indigo, lazuli, lark and snow buntings, all of which nest in Canada. Indigo and lazuli buntings are members of the cardinal family (Cardinalidae); lark bunting is a member of the sparrow family (Emberizidae); and the snow bunting is a member of the longspur family (Calcariidae). None of these four bunting species is considered endangered in Canada.

Male lark buntings are all black with large, white wing patches; females are brown with dark streaks and light wing patches. Their numbers and breeding-range boundaries fluctuate considerably from year to year. Males often sing in flight, holding their wings at an angle above the body and circling slowly back to earth while uttering a long and varied song of whistles, trills and buzzes.

Snow bunting males retain their black wings and back but are otherwise almost immaculate in breeding plumage. Females, and males outside the breeding season, are slightly duller. In Canada snow buntings are among the most northerly of nesting birds, breeding up to northern Ellesmere Island. Flocks of snow buntings are a familiar sight in most of southern Canada in winter, usually over weedy fields and stubble.