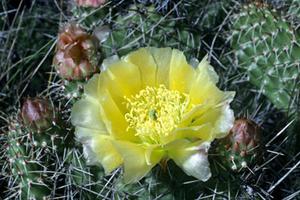 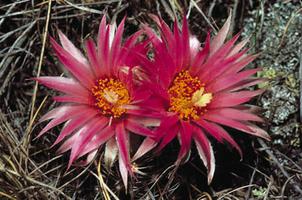 Succulent plants of the family Cactaceae which consists of approximately 1600 species in 104 genera. Cacti come in a marvelous diversity of forms, spination, growth habits, flower size and colour; as a result they are the most popular group of succulents amongst plant lovers.

A unique anatomical feature distinguishing this family from other plants is the areole, a felty, cushionlike structure from which hairs, spines, branches and flowers emerge. Cacti range in size from tiny spheres a few mm in diameter (eg, Copiapoa laui from Chile) to enormous trees more than 20 m in height and weighing in excess of 25 t (eg, Pachycereus weberi from southern Mexico). Stem shape is varied: spherical, cylindrical, creeping, flattened, or pad-shaped or leaflike (eg, Christmas cactus Schlumbergera truncata).

Cactus spines are modified leaves and most, but not all, species possess them. The diversity of cactus spines is truly stunning: they can be soft and hairlike, comblike, broad and hooked, or long and fiercely pointed (up to 15 cm long).

Spines probably serve a variety of functions in addition to the obvious one of keeping hungry or thirsty herbivores away. Some of these functions include acting as points of condensation for atmospheric moisture; shading the plant (especially from UV radiation); providing a protected site around the base for young seedling establishment; and functioning as a thermal blanket.

There are no known early fossil cacti (oldest fragments date back only 22 000 yrs), so all hypotheses as to their evolution have to be inferred from study of the anatomy, distribution, chemistry and genetics of living species. Cacti are thought to have descended from a common ancestor that looked something like species in the contemporary cactus genus Pereskia, most of which are highly branched small shrubs or trees with woody, nonsucculent stems and large, thin, drought-deciduous leaves.

The transition to present-day cacti involved reduction in leaf size; an increase in water-storage tissue in the stems; and transfer of photosynthesis and stomates (tiny pores over the surface of leaves or stems) from leaves to the succulent stems. The ratio of surface area to volume in cactus stems is low, thus reducing water loss. Numerous other features of cacti also help to minimize water loss, eg, stem tissues often have large amounts of water binding mucilage and are covered by a thick, waxy surface layer, and stomates are sunken.

In addition to changes in shape and anatomy in response to aridity, most cacti have a different type of photosynthesis than other plants. Most leafy plants (including the leaf-bearing Pereskias) open their stomates during the daytime to take in carbon dioxide and release oxygen. Cacti open their stomates at night when it is cooler and the degree of water loss is substantially less. Carbon dioxide needed for the manufacture of sugars is accumulated into organic acids in the plant during the night and converted to sugar during the daylight hours. This type of photosynthetic pathway is known as Crassulacean acid metabolism (CAM).

With their stomates closed during the daytime, cacti cannot use evaporation to cool themselves. Thermal loading is therefore a big problem, and many of the unusual shapes, spine formations and colours that cacti exhibit are thought to play a role in reflecting light or radiating heat from the plant to reduce thermal loading which could result in lethal temperatures. A few species actually grow below ground to reduce water loss and prevent overheating.

The majority of cactus species do not tolerate freezing, but a small number (perhaps 10-20%) inhabits areas that experience below zero temperatures, usually under conditions of low humidity.These species have varying degrees of freezing tolerance but the exact mechanism of this tolerance is still not completely understood.

Water loss by stems prior to the onset of exposure to freezing appears to be universal among freezing-tolerant species, and changes in cellular physiology also occur, eg, both abscisic acid levels and sugar concentrations increase during low temperature acclimation, but their exact role in the process is unclear.

All cacti flower, although some more readily than others. Some species reach flowering size in a couple of years from seed, whereas others, especially the large treelike species, may take decades to reach flowering size. Cactus flowers come in a variety of shapes, colours and sizes; each flower type attracts different pollinators, such as nocturnal bats and moths, bees, beetles and hummingbirds. There are no poisonous species, although several contain distasteful chemicals that are thought to inhibit predation by animals, insects and perhaps microbes.

The cactus family is essentially New World in distribution, ranging from the Peace River Lowland of northern British Columbia (Opuntia fragilis) to Patagonia in southern Argentina and Chile (Maihuenia poeppigii). The only cacti that occur naturally outside the Americas are 3 subspecies of Rhipsalis baccifera (parts of Africa, islands off the southeast coast of Africa and Sri Lanka).

Cacti have adapted to many different habitats of varying degrees of aridity, heat and cold. Some species have taken up an arboreal mode of existence (eg, Epiphyllum species), living as epiphytes in trees of the tropical forests, whereas others survive primarily on sea fog as their source of water (eg, many cacti of the Atacama Desert, Chile).

Four species of cacti are native to Canada: Escobaria vivipara, Opuntia fragilis, O. polyacantha and O. humifusa. All of these species are at the northern limits of their distribution.

Escobaria vivipara, pincushion cactus, is small, 2-5 cm long and occasionally up to 8 cm in diameter. A globose to cylindrical cactus, it offsets with age to eventually form large mounds 30-60 cm diameter consisting of up to 20 or more stems. Plants are densely covered with clusters of 14-24 spines up to 1.9 cm long. Flowers appear in June and are dark purplish pink and approximately 4 cm in diameter. It occurs throughout the southern prairies of Alberta, Saskatchewan and the southwest corner of Manitoba.

All Opuntia species have 2 types of spines: thin, sharp, persistent spines and tiny, deciduous, barbed glochids. Flowers are yellow, 4-5 cm in diameter and appear in May and June.

Opuntia fragilis, little prickly pear, is the most northerly cactus species, reaching approximately 56° N near Fort St John, BC. A low, mat-forming plant, up to 1 m across, it consists of jointed stem segments that vary in shape (spherical, ovoid, cylindrical or distinctly flattened). The fragile, easily detached joints vary from 2-5 cm long and 1-5 cm broad, and are typically armed with strong, viciously barbed spines (up to 4 cm long), although nearly spineless forms also exist.

Little prickly pear is widespread in Canada, ranging from BC eastward to Whitshell Provincial Park, Manitoba, to a few sites in northwestern Ontario and one site in eastern Ontario (Mellon Creek, 150 km southwest of Ottawa). In the interior of BC, the general range covers the Similkameen, Okanagan and Nicola river valleys, spreading south to Lytton and north to Kamloops, Clinton and the Peace River Lowland. This species also occurs on several islands in the Strait of Georgia and in a few localities on southern Vancouver Island.

Opuntia polyacantha, common plains prickly pear, has larger, bluish-green, more pad-shaped joints (5-10 cm long, 4-10 cm wide, 1 cm thick) than Opuntia fragilis. Spines are variable in length, reaching up to 5.5 cm long. Sometimes they are fewer in number and shorter on the lower portions of a pad. Flowers are a waxy yellow and 4.5-8 cm in diameter. This species is common in southern Alberta and Saskatchewan, and a small, atypical population (which may represent a hybrid) has been reported in the area around Ashcroft, BC.

This species is restricted to 4 confirmed locations in southern Ontario (eg, Point Pelee National Park). All populations in Ontario occur where the climate is moderated by the Great Lakes (they occur within 25 km of Lake Erie). This species grows in association with dry barrens or juniper savannahs on sand dunes or raised beach edges.

A 1984 report to COSEWIC (Committee on the Status of Endangered Wildlife in Canada) noted that both natural and non-natural processes have led to the endangered status of this species and recommends active management and protection efforts if it is to survive in Canada. In 1985 COSEWIC officially designated the cactus as an endangered plant.