Scott endeared herself to Canadians in winning the 1948 Olympics figure-skating title at St Moritz.

Germany and Japan were barred from competing in the 1948 Games at St. Moritz, which were the first Games held after the Second World War. For Canada, the Games belonged to 19-year-old figure skater Barbara Ann Scott, who inherited Sonja Henie's crown as Olympic champion. On 6 February, a large crowd packed the bleachers and perched on terraced cliffs to see Scott add the Olympic title to her skating honours, which included the European and World Championships. According to The Globe and Mail, “The dimpled world and European champion made spins, spirals and loops look like child’s play as thousands of spectators in the stands and on snow-covered sun-bathed hills around open-air Olympic Stadium shouted hoarsely, “Barbeli, Barbeli!” — pet Swiss name for the 19-year-old Canadian.” Skating on a surface chewed up by the hockey players, Scott won seven of the nine first-place votes and became the first North American woman to win gold in figure skating. It was also Canada’s first gold medal at the Winter Games in a sport other than ice hockey. In men's figure skating, American Dick Button performed the first double Axel in competition and won gold. In pairs competition, Canadians Suzanne Morrow Francis and Wallace Diestelmeyer took bronze. 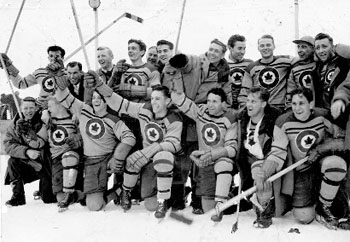 The Royal Canadian Air Force volunteered its athletes from across the country to participate on the Olympic hockey team. Hockey legends Georges Boucher and his son Frank whipped a lackluster group into a cohesive team, overcoming Czechoslovakia 3-0 to win gold on 8 Feb 1948 (courtesy Toronto Star Archives).

Still smarting from disputes with the International Ice Hockey Federation over player eligibility and tournament rules at the 1936 Olympic Winter Games, Canada did not have a hockey team until about 100 days before the start of the 1948 Games. Finally the Royal Canadian Air Force volunteered their team. The RCAF Flyers were not the favourites, but they prevailed over all their competitors, except the Czechoslovakian team, which held them to a 0–0 tie. The team’s final game against Switzerland was attended by about 5,000 Swiss spectators. The ice conditions and the refereeing were so bad that at times the game threatened to develop into a farce. When it became clear that Canada was going to win the game, Swiss spectators threw snowballs at the rink. “Barely 5,000 spectators perched themselves on mountain ledges and pelted the officials with snowballs during the final hockey games,” wrote Jack Sullivan of The Globe and Mail. “When decisions went against the Swiss in the vital game with Canada a chorus of shrill whistles echoed through the Alps and a barrage of snowballs came down from the hillside.” Canada won the game 3–0 and took gold.

In speed skating, veteran Frank Stack, who had won bronze at the 1932 Olympic Winter Games in Lake Placid, finished sixth in the men’s 500m final. It was the highest finish for Canada outside hockey and figure skating at the 1948 Games. The ski team was beset by injuries and illness and managed only a 19th place in the men’s slalom.