Olga Melikoff, Murielle Parkes and Valerie Neale were leaders of the parent group behind the creation, in 1965, of Canada's first bilingual education program, at Margaret Pendlebury Elementary School in the Montreal suburb of Saint-Lambert, Quebec. Their education activism laid the groundwork for the French immersion system in Canada. As a result of their efforts, Melikoff, Parkes and Neale are often referred to as Canada’s “founding mothers" of French immersion.

Olga Melikoff, Murielle Parkes and Valerie Neale were leaders of the parent group behind the creation, in 1965, of Canada's first bilingual education program, at Margaret Pendlebury Elementary School in the Montreal suburb of Saint-Lambert, Quebec. Their education activism laid the groundwork for the French immersion system in Canada. As a result of their efforts, Melikoff, Parkes and Neale are often referred to as Canada’s “founding mothers" of French immersion. 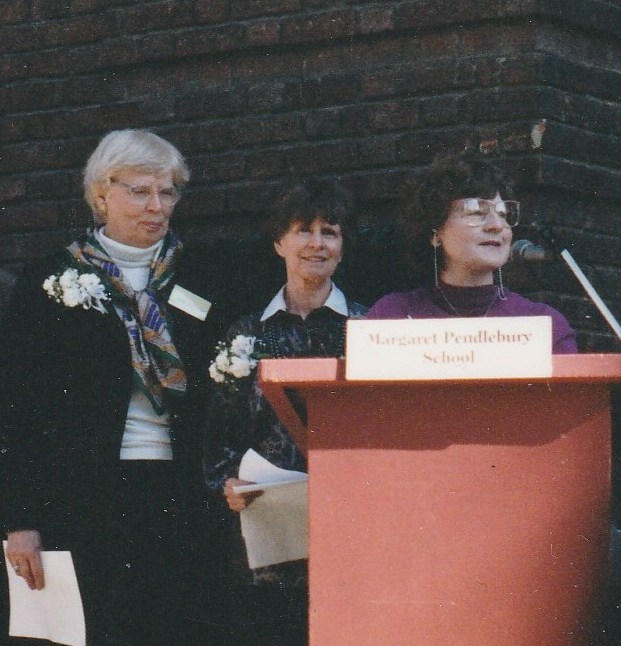 Olga Melikoff, Valerie Neale, and Murielle Parkes (from left to right) at the 30th Anniversary of the St. Lambert immersion project (1995).

The British North America Act of 1867 established education as an area of provincial responsibility (see also Constitution of Canada). In Quebec, the educational system was administered chiefly by confessional school boards. The Catholic system operated almost exclusively in French, and the Protestant system, in English. It wasn’t until the Education Act of 1988 that the confessional educational system was transformed into a language-based system (see also History of Education in Canada and Education Policy).

Origins of the St. Lambert Experiment

In the 1950s and 1960s, Melikoff, Parkes and Neale were stay-at-home-mothers and neighbours in Saint-Lambert. They were frustrated by the limited opportunities that existed for their English-speaking children to learn fluent French (see English-speaking Quebecers). They were curious about the opportunities that immersive education, in which teachers address students exclusively in a second language, could offer their children.

The three women first gathered as part of a group of like-minded Saint-Lambert parents in October of 1963. Their objective was to discuss options for improving their children’s French-language education in English-administered schools within the Protestant system. To this end, the group developed a new pedagogical approach based in part on the “language bath” model outlined in a 1963 report by the United Nations Educational, Scientific and Cultural Organization (UNESCO).

However, in 1964, the Chambly County School Board, which oversaw the smaller St. Lambert Protestant School Board, rejected the proposal to create a kindergarten class for anglophone children taught exclusively in French.

Melikoff, Parkes and Neale were not discouraged. They continued their advocacy work at local and provincial levels. At the same time, the SLPPBE organized extracurricular French classes for their children and observed the results.

“The parents, working together, enrolled the children, found teachers and assistants, venues, materials, and everything required for establishing day camps in the summer, art and conversation groups in the winter,” wrote Melikoff in her own records. “Our goal was to help the children get a start in French by using our ‘controversial’ method – one French teacher speaking only in French to a group of anglophone children. While they were actively involved in play, the children were absorbing a new language.”

After nearly two years of public pressure on the Chambly County School Board from hundreds of involved parents—and in particular from Olga Melikoff, who was elected as a member of the St. Lambert Protestant School Board along the way­­­­—the Board agreed to administer one experimental bilingual kindergarten class beginning in the fall of 1965. Children were enrolled on a first-come, first-served basis. Evelyne Billey, who came from France, was hired as the first teacher. 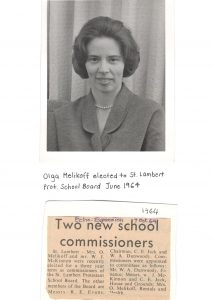 Election of Olga Melikoff to the St. Lambert School Board (1964).

The results of immersion education were promising. Students showed early and impressive proficiency in French. Melikoff, Parkes and Neale submitted briefs about their progress to officials at various levels of Quebec’s government, seeking support and encouragement toward their goal of expanding bilingual classes beyond the initial kindergarten experiment.

Interest among parents continued to grow. A second kindergarten class was added the following year as well as a grade-one class to allow the first experimental group to continue with their immersion program as they ascended grades. The immersion program was implemented across the South Shore within several years and, eventually, elsewhere in the Greater Montreal area. By 1970, bilingual education programs were rapidly spreading due to demand from parents across Canada. 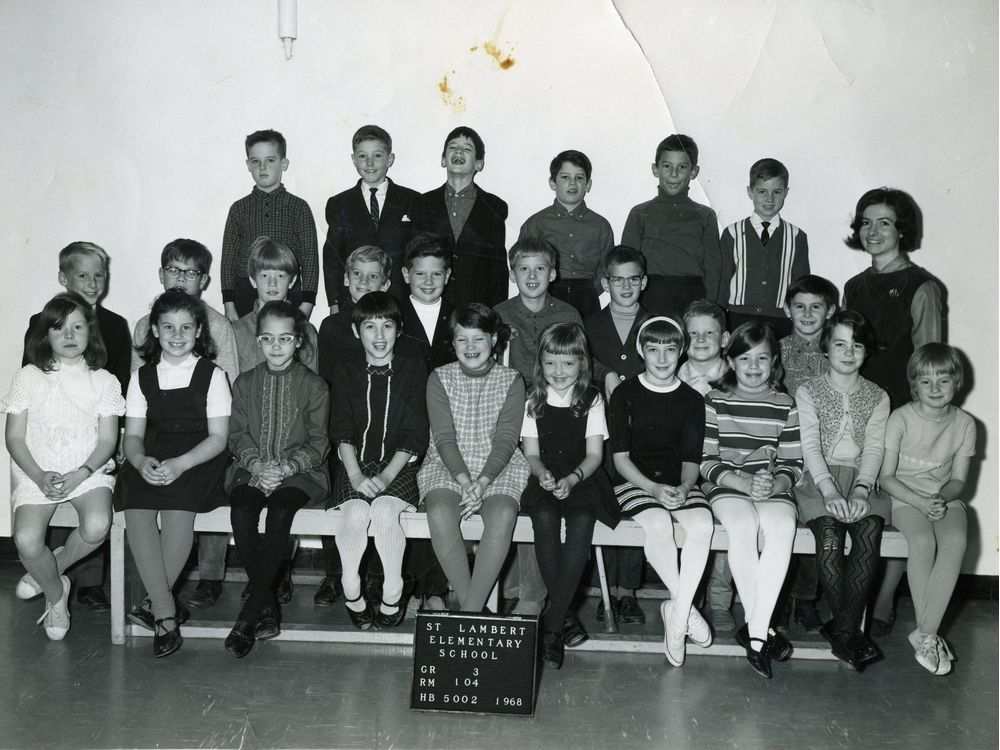 The grade 3 class at St-Lambert Elementary School (1968). These children were the first cohort in the French immersion program founded by Olga Melikoff, Murielle Parkes and Valerie Neale. Penny Parkes, daughter of Murielle Parkes, is front row, far right; and Peter Melikoff, son of Olga Melikoff, is third from left in the middle row.

During the early years of the parents’ group, Melikoff, Parkes and Neale contacted two McGill University scholars, Dr. Wallace E. Lambert, a social psychologist, and Dr. Wilder Penfield, an acclaimed neuroscientist. The group sought advice and institutional support. Both doctors offered their support in spirit but their initial advice overall was to focus on bilingual education in the home rather than try to create structural affordances for it in the school system.

In 1966, once the experimental kindergarten had begun, the group called Dr. Lambert again. This time, he proposed a research study tracking the psycholinguistic outcomes of the bilingual education project.

The first tests for the study began in 1967, and within several years, the data that his team had gathered showed positive results among the children in French and English language development as well as math and some psycholinguistic metrics. In 1972, Dr. Lambert co-authored the book Bilingual Education of Children: The St. Lambert Experiment with Dr. G. Richard Tucker, which detailed the results of four years of research. The book was widely publicized, and in part for this reason, Dr. Lambert is sometimes incorrectly given credit for having developed the French immersion pedagogical model that was in fact the product of years of development and advocacy led by Melikoff, Parkes and Neale.

The bilingual education parents’ group held a final meeting and celebration with members and supporters on June 19, 1972. Shortly thereafter, Melikoff moved to Ottawa for several years, and Valerie Neale’s husband, Allan, took over Melikoff’s role on the St. Lambert School Board. In 1977, a group called Canadian Parents for French was established, and the three women saw this as a symbolic assurance that French immersion education was well on its way to being established across Canada.

In the 2014-15 school year, 409,893 students were enrolled in French immersion nationwide, up 4.5 per cent from the previous year, according to Statistics Canada. The year 2016 marked the 50th anniversary of the first graduating kindergarten class at Margaret Pendlebury—and, by extension, of French immersion education in Canada. In 2018, Murielle Parkes and Olga Melikoff were awarded a Sheila and Victor Goldbloom Community Service Award by the Quebec Community Groups Network (see also Commissioner of Official Languages). Although there are no posthumous Goldbloom awards, Valerie Neale, who passed away in 2000, was recognized in the award write-up and related media coverage.