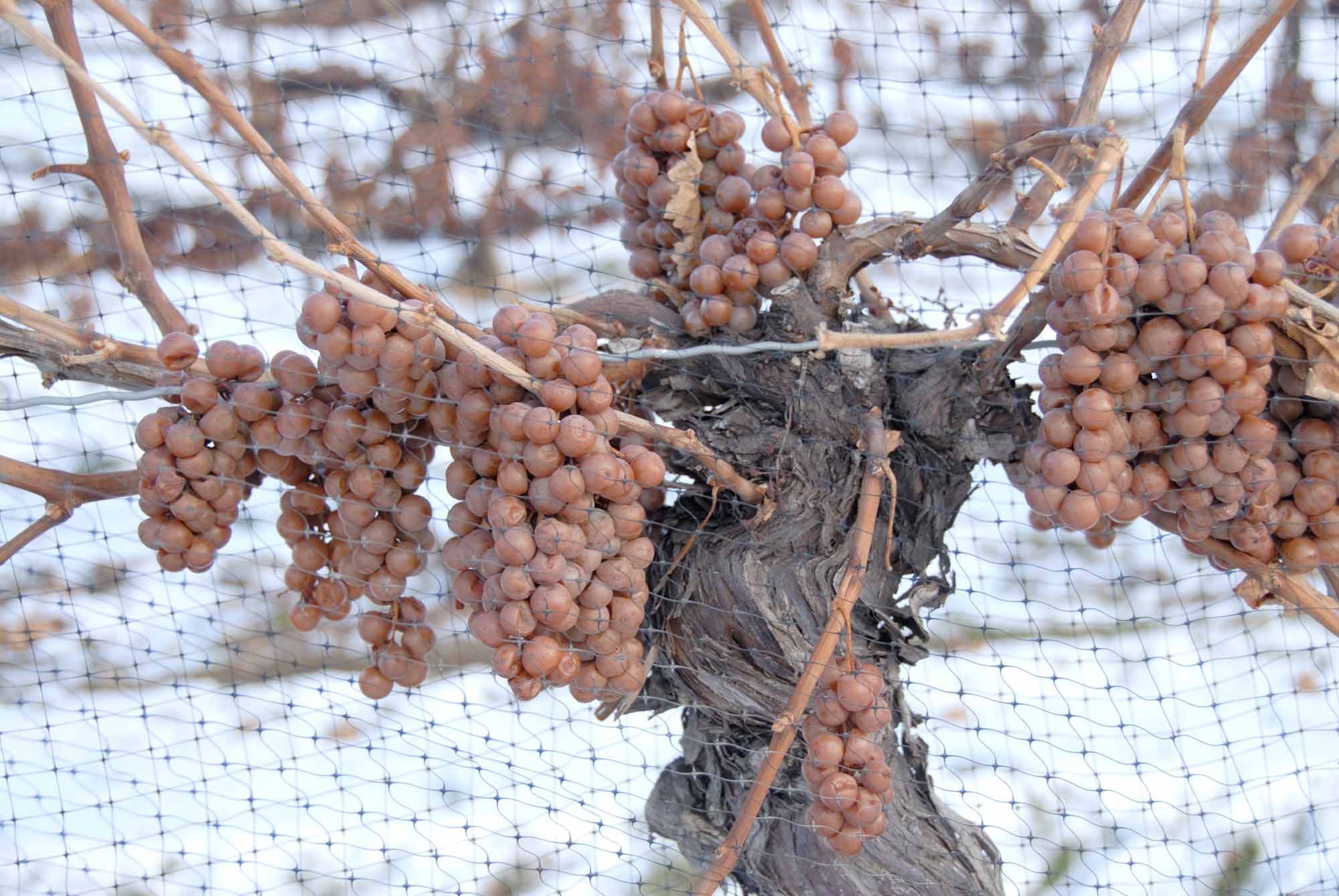 Bunches of Vidal ice wine grapes frozen on the vine. 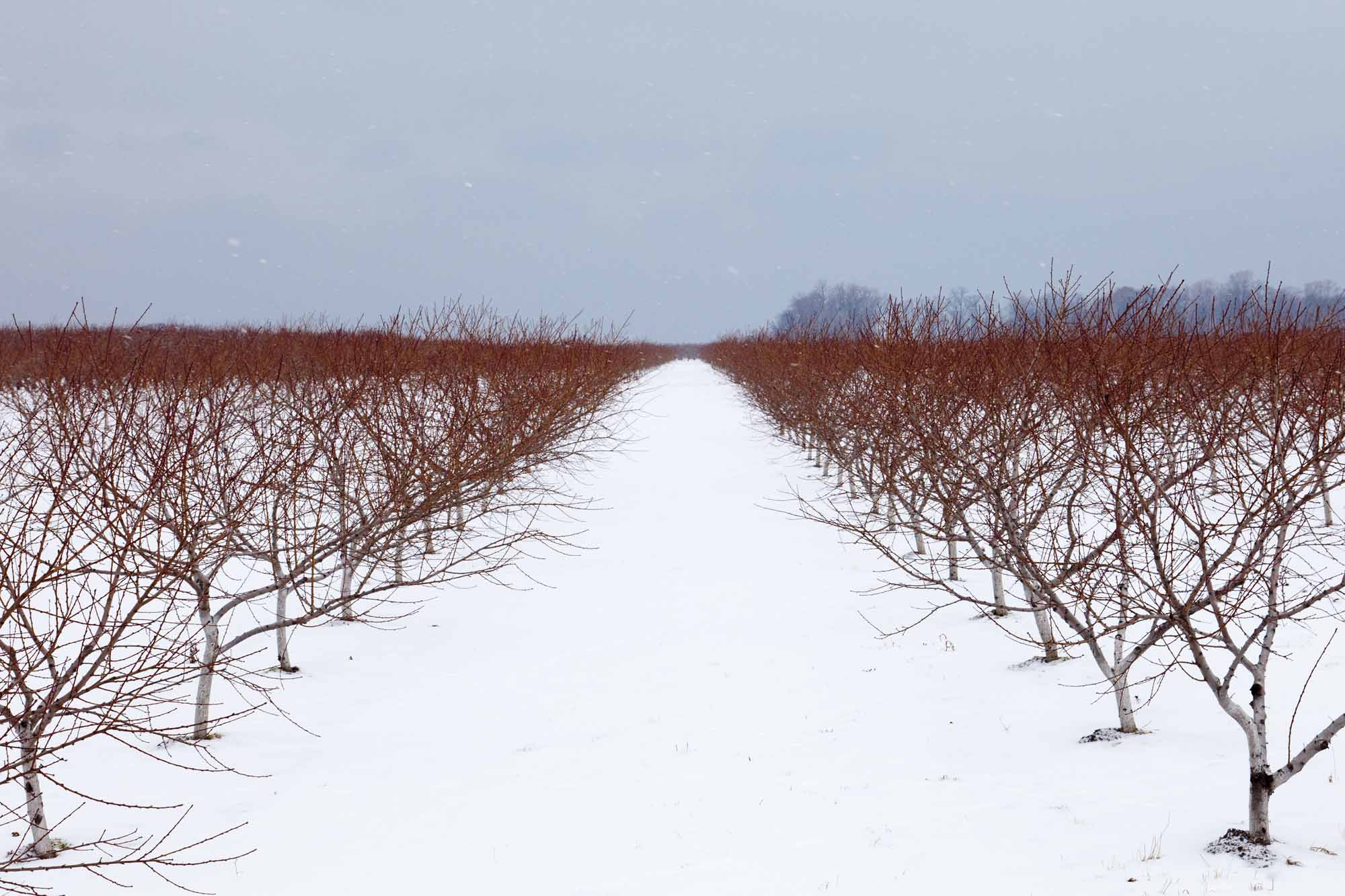 One of the dozens of wineries in the region of Niagara on the Lake, Ontario, seen in the winter when the grapes have already been harvested and snow covers the ground. Some wineries wait until this time of the year to harvest and produce Canada's famous icewine. 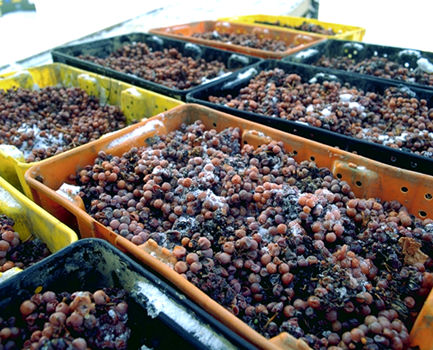 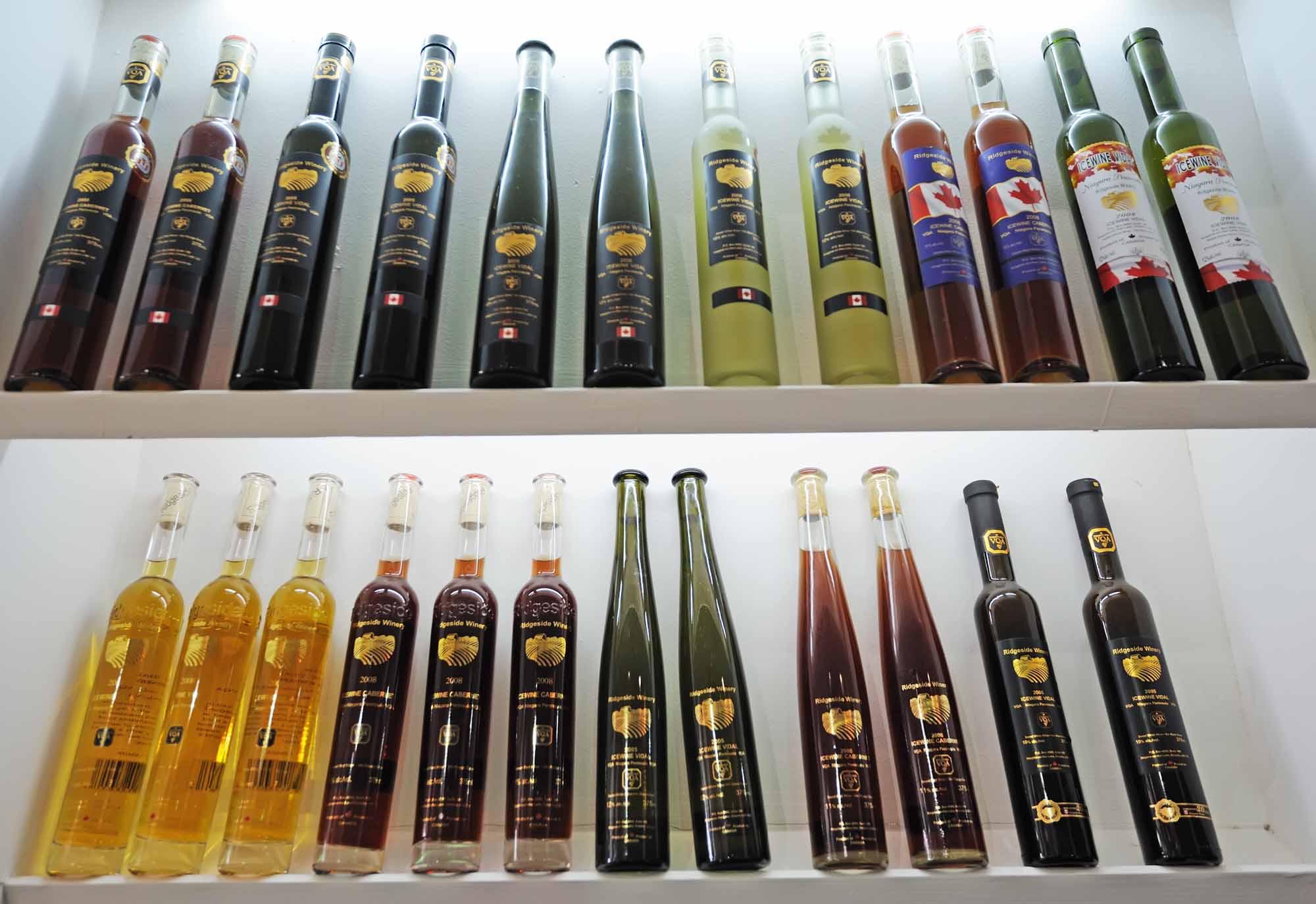 Canada ridgeside wines in the shelf. 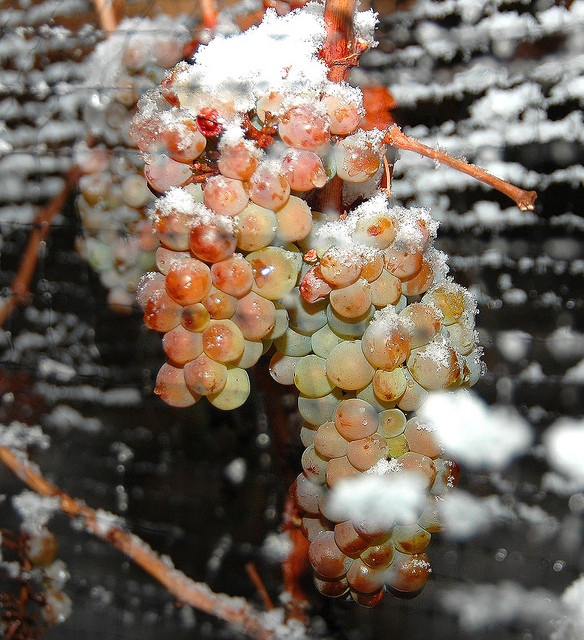 Canada didn’t invent icewine but in the space of a couple of decades it has become the Canadian product that is most sought after by the international wine community. Icewine (or eiswein as the Germans call it) was “discovered” in 1794 in Franconia when a freak frost froze the grapes. Peasant farmers, not wanting to lose their grapes, pressed them anyway and were delighted with the resulting sweet wine. Since then German producers have made eiswein whenever the weather permits. In our own time the Canadian version has become a global celebrity, an iconic product that is as Canadian as the Mounties, Wayne Gretzky and maple syrup. Whenever Canadian icewine is entered in international competitions, it walks off with medals. Canadian icewine appears on the wine lists of the world’s top restaurants, and you can now buy it in India, Taiwan, Hong Kong, Beijing, New York City, London, Rome and Paris.

Unlike the grapes for dry table wines that are harvested in September or October, icewine grapes are left to hang on the vine until they freeze as hard as marbles. In Canada, this usually occurs around Christmastime or by early January. Since the juice is rich in sugar, the temperature has to drop well below freezing and stay there long enough for the bunches to be harvested and pressed while still in their frozen state.

According to Canadian wine law, grapes designated for icewine cannot be picked until the mercury drops to at least -8°C (17° Fahrenheit), although colder temperatures make for a better quality product. The sugar level of the grapes at the time of harvest must reach a reading of at least 35 Brix (one degree Brix is equal to 1 gram of grape sugar); otherwise they can only be designated as Special Select Late Harvest or Select Late Harvest wines. The bunches must also be attached to the vine until they are harvested. A grape berry contains roughly 80 per cent water and, when the frozen berries are pressed, the water remains in the skins as shards of ice, allowing small amounts of concentrated juice to flow slowly out. The juice from icewine grapes is about one-fifth the amount you would normally get if you pressed unfrozen grapes. To put it another way, a vine will produce sufficient quantities of grapes to make one bottle of wine; but frozen grapes will produce a mere one glass of icewine.

Originally, Canadian icewine was made only from either Vidal or Riesling grapes but with experience winemakers have added other varietals for its production. In Niagara-on-the-Lake, Ontario, Pillitteri makes 13 different icewines and claims to be the world’s largest estate winery currently making this product. Other vintners have found novel ways to manipulate icewine by ageing it in oak or making it as a sparkling wine. Peller Estates has also used icewine as a dosage (sweetening agent) in its sparkling wine; Magnotta has produced an icewine grappa; Kittling Ridge has added it to brandy and Vineland Estates makes a Vodka icewine called Vice — the world’s first vodka icewine martini.

But to Ontario’s Inniskillin winery goes the credit of having created the international market for Canadian icewine. Their 1989 Vidal Icewine won the coveted Prix d’honneur at Vinexpo in Bordeaux in 1991 — one of 15 such prizes judged from thousands of international entries. This victory created global interest in Canadian wine (see Wine Industry). “Looking back,” Inniskillin’s then co-owner, Donald Ziraldo has said, “when nobody had heard of Canadian wine before, that gold medal was the stepping stone to the world stage. Inniskillin icewine became a luxury brand. I always thought of it as a halo effect for our other wines. Because of our winters people can relate icewine to Canada.”

Ontario can justifiably claim to be the world’s largest producer of icewine, with some 40 to 50 wineries, depending on the vintage, involved in the business of turning frozen, desiccated grapes into lusciously sweet wine. But it was British Columbia that was the first region to produce this dessert wine in Canada. In his book, Icewine: The Complete Story, John Schreiner recounts how the late Walter Hainle made his first icewine in Peachland from Okanagan riesling in 1973 — 40 litres in all. “It became an annual tradition,” wrote Schreiner. “In 1988 when the Hainle Vineyards winery opened [...] the vintages for sale included 256 bottles of 1978 icewine.”

The very first attempts at producing icewine on a commercial scale in Ontario were sabotaged by both bird and man. In 1983, Inniskillin lost its entire crop to the birds the day before picking was scheduled. That same year, winemaker Walter Strehn at Pelee Island Winery had taken the precaution of netting his vines to protect them from birds because his vineyard was in the direct flight path of migrating birds from the Point Pelee sanctuary. Some persistent blue jays, however, managed to break through his nets and were trapped in the mesh. A passing bird enthusiast reported him to the Ministry of Natural Resources and officials descended on the vineyard and tore off the netting. Strehn not only lost $25,000 worth of riesling and Vidal grapes to the rapacious flock but also was charged with trapping birds out of season and using dried grapes as bait. Happily, the case was dropped and, with the grapes that were left, he managed to make 50 cases of Vidal Icewine 1983, which he labelled in the German designation as Beerenauslese Eiswein. He sold the wine to the LCBO, who set a retail price of $12.50 a half bottle. The consuming public was not familiar with this wine style and bought very little, so the LCBO returned the majority of bottles and demanded a refund. Pelee Island found a more willing market in the United States, where the product sold for $100 a bottle. The LCBO then begged to have it back.

A significant portion of the icewine produced in Ontario is exported, particularly to Japan, Taiwan and Hong Kong. So desirable is it in these markets that a flourishing grey market in counterfeit icewine has developed. It’s the luxury gift that everyone loves to give and to receive. And like all desirable luxury goods, it is being counterfeited on an unprecedented scale in Southeast Asia. It is estimated that 50 per cent of the Canadian icewines on the shelves in Asia is fake.

The counterfeiters try to make the label and the package look like a VQA product sold on Canadian liquor board shelves, but their sense of geography sometimes leaves much to be desired. William Ross, former president of the Canadian Vintners Association, pointed out: “You have counterfeit icewine bottles with ‘Chilliwacko, Ontario,’ instead of Chilliwack, British Columbia, or ‘Elixir of the Gods, Torontow,’ with a picture of Whistler [BC]… in the background and maple leafs festooned all over.”

Canadian consumers, however, do not have to worry about counterfeit icewine. If the bottle in the wine store bears a VQA seal, it will have been thoroughly tested and is guaranteed to be the genuine article.

In addition to producing icewine, Québec also makes a product similar to icewine, but using frozen apples instead of frozen grapes. The result is ice cider or ice apple wine. There are two methods employed in freezing the apples and some dissension among practitioners as to the more correct one: the apples are either left to freeze on the trees at temperatures of -8°C to -15°C, or the fruit is harvested late in the season and left outdoors to freeze in December. Winemaker Christian Barthomeuf produced the province’s first commercial ice cider in 1989.