Canadian Music on a Roll

Despite the steady stream of Canadian musicians who have won international stardom in the past 30 years - Joni Mitchell, Neil Young, Anne Murray and Rush, to name a few - until fairly recently the country was still a bit of a POP-MUSIC backwater. Most performers had to move south to get established.

This article was originally published in Maclean's Magazine on March 24, 1997

Despite the steady stream of Canadian musicians who have won international stardom in the past 30 years - Joni Mitchell, Neil Young, Anne Murray and Rush, to name a few - until fairly recently the country was still a bit of a POP-MUSIC backwater. Most performers had to move south to get established.This article was originally published in Maclean's Magazine on March 24, 1997 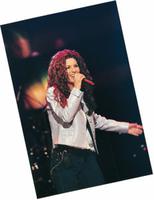 Breaking a record that it took Patsy Cline 40 years to set, Twain's 1995 CD The Woman in Me attained sales of 12 million copies worldwide (courtesy Maclean's).

Canadian Music on a Roll

Recently, Larry LeBlanc, Canadian editor of Billboard, wrote a brief story on a 21-year-old Vancouver singer-guitarist who goes by the name of O Susannah. "I'd fallen in love with her voice," recalls LeBlanc, "which sounds like a cross between Hank Williams and Emmylou Harris. The next thing I know, I'm fielding calls from Elliot Roberts, who manages Neil Young, and from Joe Boyd in London, who records the McGarrigle sisters. They wanted to know more about O Susannah." Adds LeBlanc, laughing: "Then this woman, who hadn't even made a record - she'd sold a total of 50 self-produced cassettes - got called directly by DreamWorks, Steven Spielberg's company. That's how much the world's music industry is paying attention to Canadian talent."

Despite the steady stream of Canadian musicians who have won international stardom in the past 30 years - Joni Mitchell, Neil Young, Anne Murray and Rush, to name a few - until fairly recently the country was still a bit of a POP-MUSIC backwater. Most performers had to move south to get established. The few recordings that were made at home were unlikely to be noticed anywhere else. But now, not only does Canada have a thriving industry, but it seems to be generating a disproportionate number of music sensations - including, of course, the three reigning divas of pop: Alanis Morissette, Céline Dion and Shania Twain. Together, their latest records have sold 57 million copies worldwide. With her 26-million-seller, Jagged Little Pill, Ottawa-born Morissette, 22, has the best-selling debut album by a female artist in U.S. music history. Quebec-based Dion, 28, the top-selling singer ever in France, has racked up 21 million sales of her latest, Falling Into You. Timmins, Ont.'s Twain, 31, has sold 10 million copies of her crossover album The Woman in Me, which has surpassed Patsy Cline's Greatest Hits as the best-selling country album by a female of all time. In the past year, the three have hauled in enough Grammies, Junos and other trophies to furnish a shrine. And at the March 9 Juno Awards, held in Hamilton, the women shared a newly created prize for international achievement. Morissette, on sabbatical in India after almost two years of touring, did not attend the ceremony at Copps Coliseum. Onstage, Dion and Twain expressed their delight at the joint prize, then turned and thanked the presenter, Anne Murray. "You started everything," said Dion. "You opened so many doors for us."

While the past two years have been dominated by Céline, Alanis and Shania, several other Canadian artists are also enjoying phenomenal success. Among them are such international household names as k.d. lang and Bryan Adams. And then there are newer talents. Vancouver-based Sarah McLachlan's Fumbling Towards Ecstasy has attained sales of 2.5 million worldwide. Calgary's Jann Arden, who hosted this year's Junos, has reached the 1.5 million mark for Living Under June, a number equalled regularly by Stratford, Ont.-based Celtic artist Loreena McKennitt. Acts including Ashley MacIsaac, Deborah Cox, The Rankin Family and I Mother Earth are all making inroads abroad. And perhaps the hottest new phenomenon is Toronto-based Amanda Marshall, who boasts 1.5 million sales of her self-titled debut album, and is currently a favorite on U.S. morning talk shows.

Marshall has toured 15 countries in 14 months, including Norway, where her album is topping the charts and she was mobbed by fans at the Oslo airport. "People abroad keep asking me what's in the water in Canada, because of all the women singers," Marshall said in an interview from her hotel in Detroit, where she was wrapping up one leg of a tour with John Mellencamp. But the 24-year-old singer points out that she and other Canadians now in the spotlight are not overnight sensations. "And most of us are touring exhaustively," adds Marshall, who begins a headliner Canadian tour in May.

The flip side of that international splash is a much stronger domestic market for an increasing number of bands. As has traditionally been the case in Quebec, English-Canadians are now ardent supporters of their own recording artists. According to the Canadian Recording Industry Association, last year there were 141 certifications of recordings by Canadian groups or solo acts, recognizing sales of 50,000 (gold), 100,000 (platinum) or 1 million (diamond). That is an increase of 27 per cent over 1995. In some cases, home-based support has not been accompanied by an international breakthrough. The Tragically Hip, whose Trouble at the HenHouse won best album at the Junos and where they were named best group of the year, have sold an astounding 4.5 million copies of their four albums in Canada (including more than 650,000 for Trouble at the HenHouse). But they have yet to achieve a high profile abroad. Asked backstage at the ceremony how he would transport his Juno success down to the United States, the band's lead singer, Gord Downie, replied mischievously, "Upside down, tucked in my sock."

Downie's remark, though tongue-in-cheek, illustrates an increasingly prevalent attitude about making it stateside. "For a long period in our Canadian psychology, success meant success in the U.S." says Denise Donlon, director of music programming at MuchMusic. "Now, we support our own musicians, and buy them. The attitude has changed from, 'Oh, they didn't make it the States,' to, 'Well, I guess the Americans just don't get it.' It's as if a tiny nut turned in our psyches."

Still, foreign sales are usually necessary for a band to do more than just break even. And increasingly, those sales are being made outside North America as the global market grows. Fifteen years ago, the United States accounted for more than half of the world's record sales; now that figure is closer to a third. While megastars such as Dion, Morissette and Adams are popular just about everywhere, other Canadian artists win fans in some surprising places. Jerk, a single by Newfoundland singer Kim Stockwood, was No. 1 in Poland. The band Moist, which recently relocated from Vancouver to Montreal, hit gold in Thailand. Still, an American breakthrough is the surest route to fame and fortune. And Moist, with Canadian sales of nearly 400,000 for its debut, Silver, and more than 200,000 for its second album, Creature, has just inked a deal with Arista to launch Creature in the United States.

But whether the success is at home, abroad or both, the question arises: why now? Lee Silversides, president of the Canadian Academy of Recording Arts and Sciences, points to the maturing of the business side of the industry over the past 25 years. "The talent that this country has nurtured has always been of the highest quality," says Silversides. "It's taken that much time to finesse our ability to market it, at home and on the international stage." And he cites the 1971 introduction of the Canadian content regulations - which stipulate that broadcasters must devote 30 per cent of air time to Canadian music - as a strong foundation that helped nurture an infant industry.

Everyone in the industry, meanwhile, points to another, more recent factor: the explosive growth of the so-called indie sector, which includes artists who produce and package their own music as well as small, upstart labels. A number of musicians who created and marketed their own CDs and cassettes - acts such as McKennitt and Toronto-based Barenaked Ladies - were so successful that the major record companies were soon in bidding wars to sign them. (McKennitt's own label, Quinlan Road, is now with a Warner subsidiary, WEA, while Barenaked Ladies are with another Warner imprint, Reprise.)

According to Brian Chater, president of the Canadian Independent Record Production Association, the runaway growth of Canadian acts has driven the Canadian branches of the majors into a kind of "feeding frenzy. They're paying $250,000 to sign acts that have almost no track record. It's crazy." Chater cautions that Canadian branches of the majors are not automatically conduits for launching homegrown talent abroad. But that, of course, has not been the case for Dion, whose English-language career has flourished with Sony Canada (Morissette and Twain are signed directly to American labels).

No doubt there are currently hundreds of performers in Canada fuelled by the success of the three divas. And even if they don't achieve those stratospheric heights, many of them may well find their niche in a world that is grooving to Canadian artists.