The 1925 Railway Agreement was one way for William Lyon Mackenzie King’s Liberal government to address Canada’s labour needs. As railways assisted with immigration and settlement, the Canadian Department of Citizenship and Immigration established an agreement with the two main railway companies in Canada ? Canadian Pacific Railway (CPR) and CN. The agreement gave CPR and CN the right to recruit agriculturalists and other immigrant farm workers from Central and Eastern Europe.

The agreement was an opportunity for thousands of immigrants to come to Canada, but portions of the railway agreement were cancelled by the federal government in 1930. The newly elected Conservative government of R.B. Bennett cancelled the program in response to the Great Depression, pressure from labour groups and organizations opposed to large scale immigration from certain parts of Europe. However, other immigration regulations remained in place until the 1950s, which allowed the Canadian National Land Settlement Association (CNLSA) (and its CPR counterpart) to continue to operate until 1961.

In response to the 1925 Railway Agreement, CN created a land settlement division within its Colonization and Agriculture Department. The new division was called the Canadian National Land Settlement Association (CNLSA). It was established on 9 March 1925 as part of CN’s program to promote immigration and land settlement in Canada. This both increased rail traffic and helped the railway use some of the land granted by the federal government. Land was located and money released to immigrants to purchase land, equipment and livestock.

The CNLSA assisted thousands of immigrants coming to Canada. One 1934 CNLSA report noted that 177,000 people were brought into the country between 1925?34, including 8,000 families. The association also encouraged residents of Canada to move and relocate within the country.

Many European immigrants heading for farms in Western Canada stopped at the Winnipeg immigration sheds attached to the CN railway station. The CNLSA reception office ? Room 100 ? was also located there. 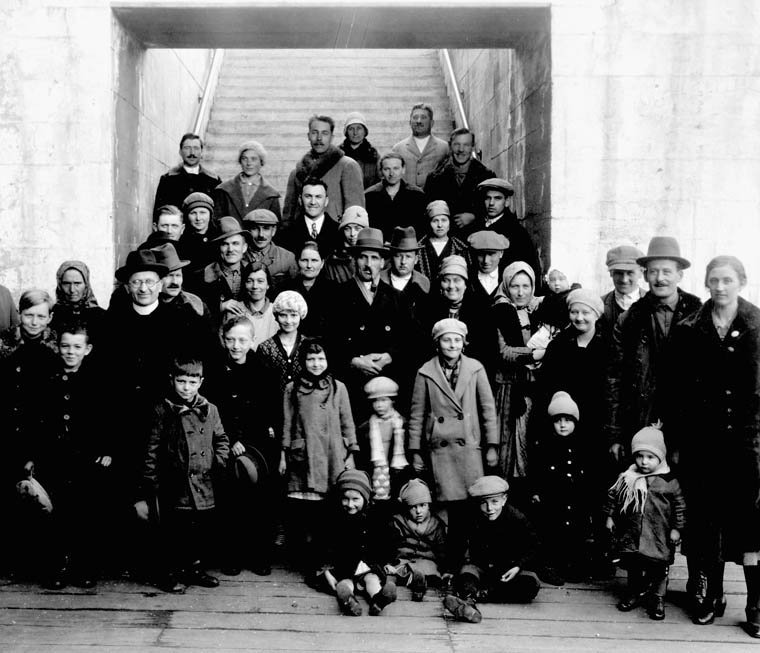 The activities of the CNLSA can be summarized as follows:


The department was split over four regions. A headquarters office was in Montreal while district offices were in Toronto, Quebec City and Halifax. These offices were responsible for managing Eastern Canada. A regional headquarters office in Winnipeg was responsible for Western Canada. District offices for Western Canada were also in Saskatoon, Edmonton and Prince George. A United States office was based in St. Paul Minnesota. A European Office was located in London, England, with various smaller branch offices in other parts of the United Kingdom and Europe (including Liverpool, Glasgow, Oslo, Copenhagen, Rotterdam, Gothenburg, Warsaw and Zagreb). 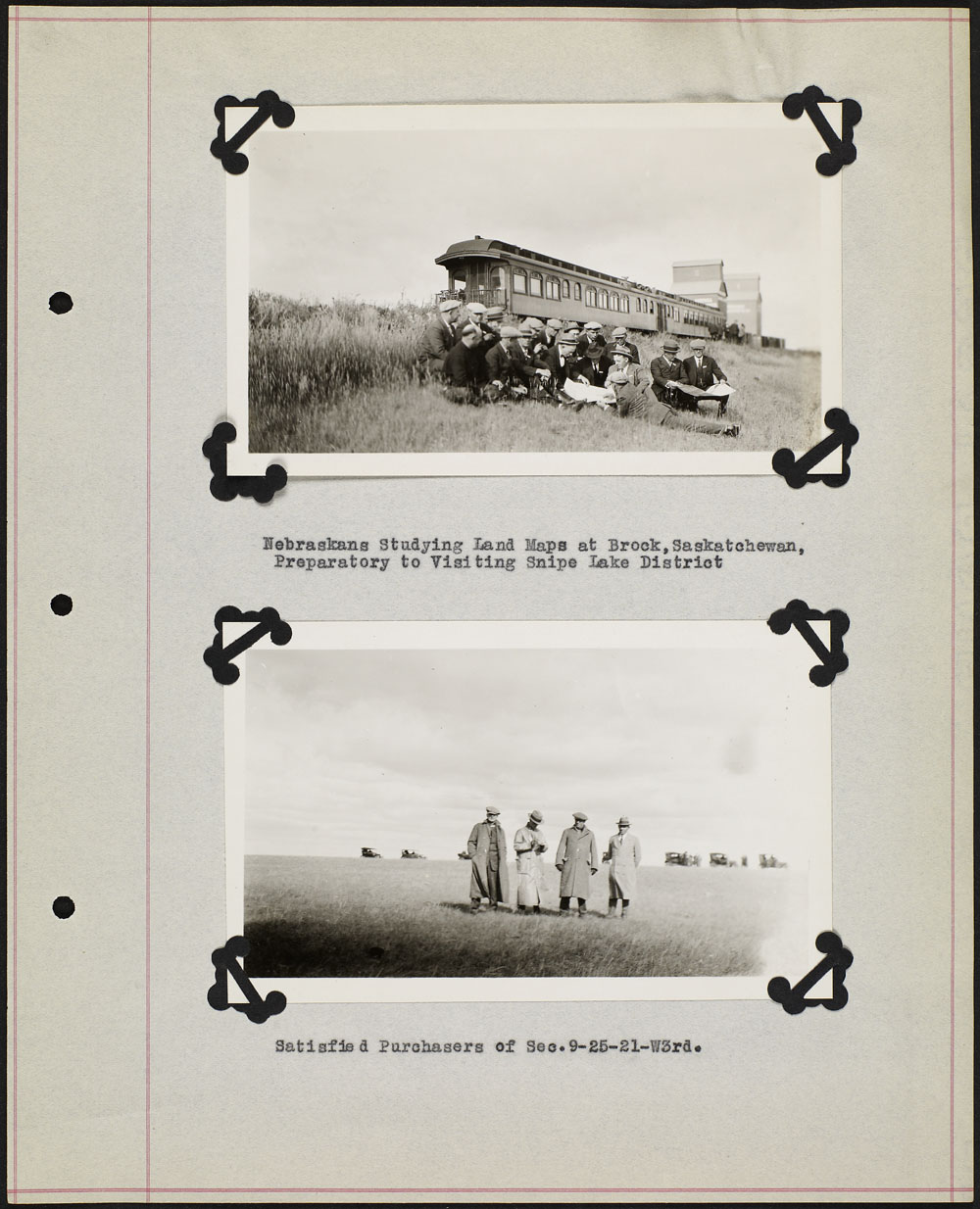 The main European Office in London, England contacted, evaluated and forwarded what it thought were suitable immigrants to Canada. There were also Certificate Issuing Officers (CIO) who developed relationships with the steamship companies. The CIOs followed various criteria under CN’s Continental Family Settlement Programme. (Continental was a code word for “non-preferred” immigrants, as defined by the 1925 Railway Agreement.) CN guidelines organized immigrants into groups (such as family size and nationality) and quotas were assigned for more specific ethnic origins. The Canadian offices, on the other hand, did additional work (assisted by 400 part-time field operatives and station agents). This included:

CN’s Colonization and Agriculture Department and the CNLSA were closely associated in the work of bringing immigrants to Canada. With the CNLSA being virtually part of the Department, their archival records are often intermingled. Much of the administrative and operational records created help document CN’s efforts to obtain settlers, their placement on the land and their progress. These include reports, policy and correspondence files, files concerning individuals and organizations (usually identified by ethnic origins), community progress reports, settlement proposals, shipping files, relations with various governments, and copies of annual reports and other publications.

Of particular interest are the specific immigrant files, which include an application questionnaire indicating the nationality, language, religion, age and family members; identification card; record of service for families, including name of the shipping line and ship used for passage to Canada; receipts; documentation of location of settlement in Canada; and various correspondence.

“Dear Sir, I am writing to thank your department for the help they gave me in getting my land…Both my wife and I like this country very much and expect to make a home here.

These excerpts from a letter were written in 1936 to the Canadian National Railway’s Department of Colonization and Agriculture. The Silobodec family was one of thousands who were helped to immigrate to Canada between the 1920s to the early 1960s. 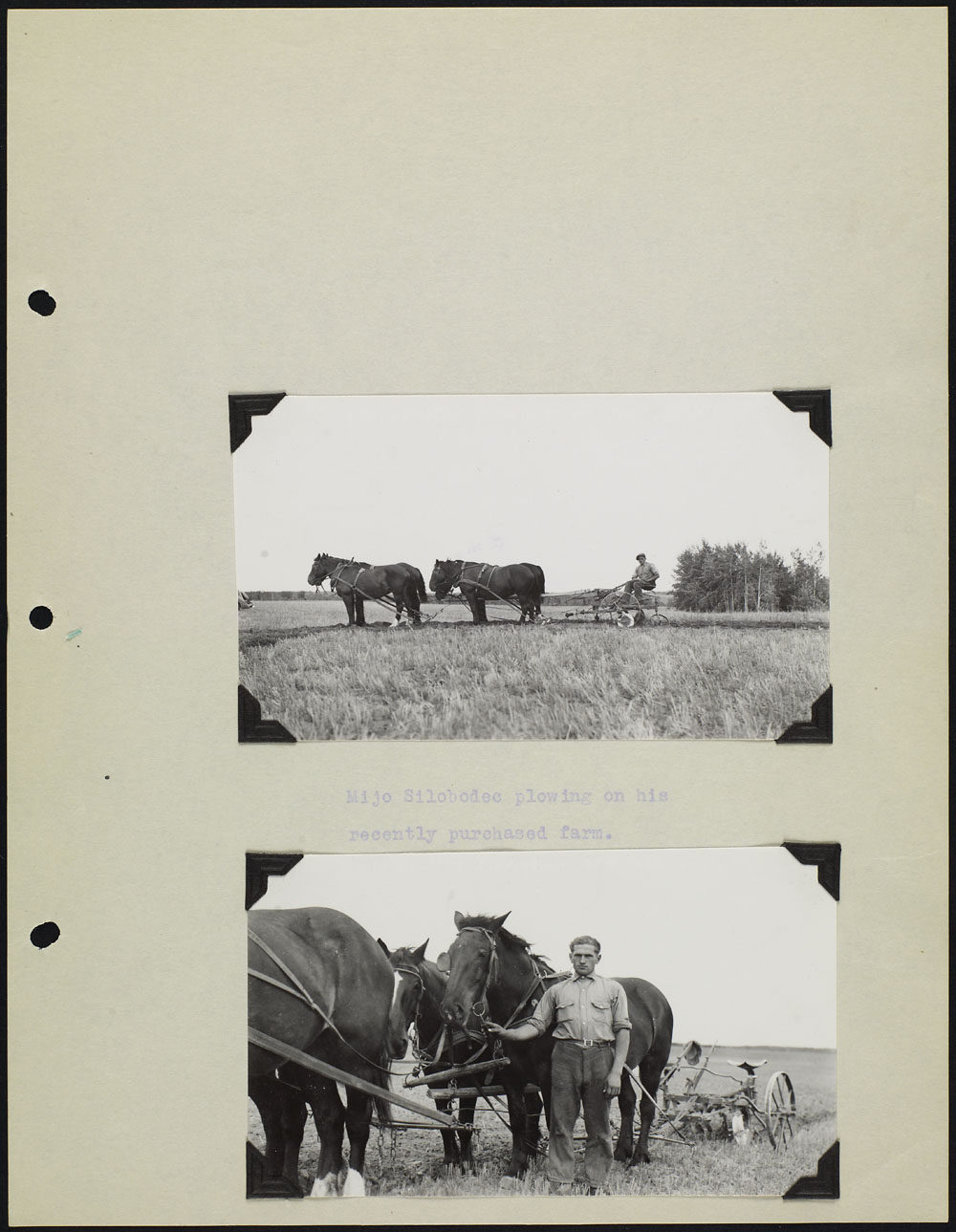 Prior to the arrival of new immigrants in the late 1920s, there had been a systematic diminishment by the federal government of Indigenous claims to land. This had come in the form of the Indian Act of 1876 and numerous treaties, dating from 1871 to 1921. The social, economic, and cultural impacts of the treaties on First Nations peoples were great. The treaties enabled the creation of reserves, schools and other instruments of assimilation that had deep consequences on Indigenous traditional ways of life. By the time the CNLSA was actively recruiting immigrants to Western Canada, most Indigenous peoples had been removed to reserves. This meant that land that was once occupied by First Nation peoples was considered vacant and thus CN (and the federal department of immigration) marketed the prairie provinces and British Columbia mostly as areas where land was free to be purchased, occupied and farmed (see History of Settlement in the Canadian Prairies). In many cases, there were multiple solitudes: immigrants of different nationalities were invited to “colonize” separate areas as long as they stayed together; and then, separate from these racialized communities were the reserves for First Nations.

Final Years of the CNLSA

During the mid-1930s to mid-1940s, the CNLSA spent more time on re-settling people who were already living in Canada. From the end of the Second World War to the late 1950s, the CNLSA helped transport new immigrants to various parts of Canada who had been displaced by various areas of war-torn Europe (see Immigration to Canada). A late 1950s CNLSA annual report records that over the course of its operations, the CNLSA assisted over 1.1 million people (out of approximately 2.3 million Canadian arrivals) and helped settle over 71,000 farm families.

However, in late 1961, the federal government decided that the Department of Citizenship and Immigration would handle all of Canada’s immigration programs and activities and it ended its immigration relationship with Canada’s railway companies. This decision, combined with corporate restructuring at CN meant that all CN land settlement activities were terminated. CN’s immigration reception room in Winnipeg closed in 1964 and all records were cleared out.

While the CNSLA no longer exists, numerous records, including photographic reports and lists documenting the settlement of families were transferred to the Public Archives of Canada in the mid-1960s. These records are currently maintained by Library and Archives Canada. Some records document the farms and farmhouses that immigrants to Western Canada built. Other records document the settlement of immigrant families from 1920 to 1940. These records include photos of the families themselves with fairly detailed family and location information, such as names, country of origin and language spoken. The CNLSA’s photographic reports also provide researchers with information about people and about farm settlement patterns in Western Canada. These records are significant historical sources as census records from the 1930s have not yet been released (at the time of writing). 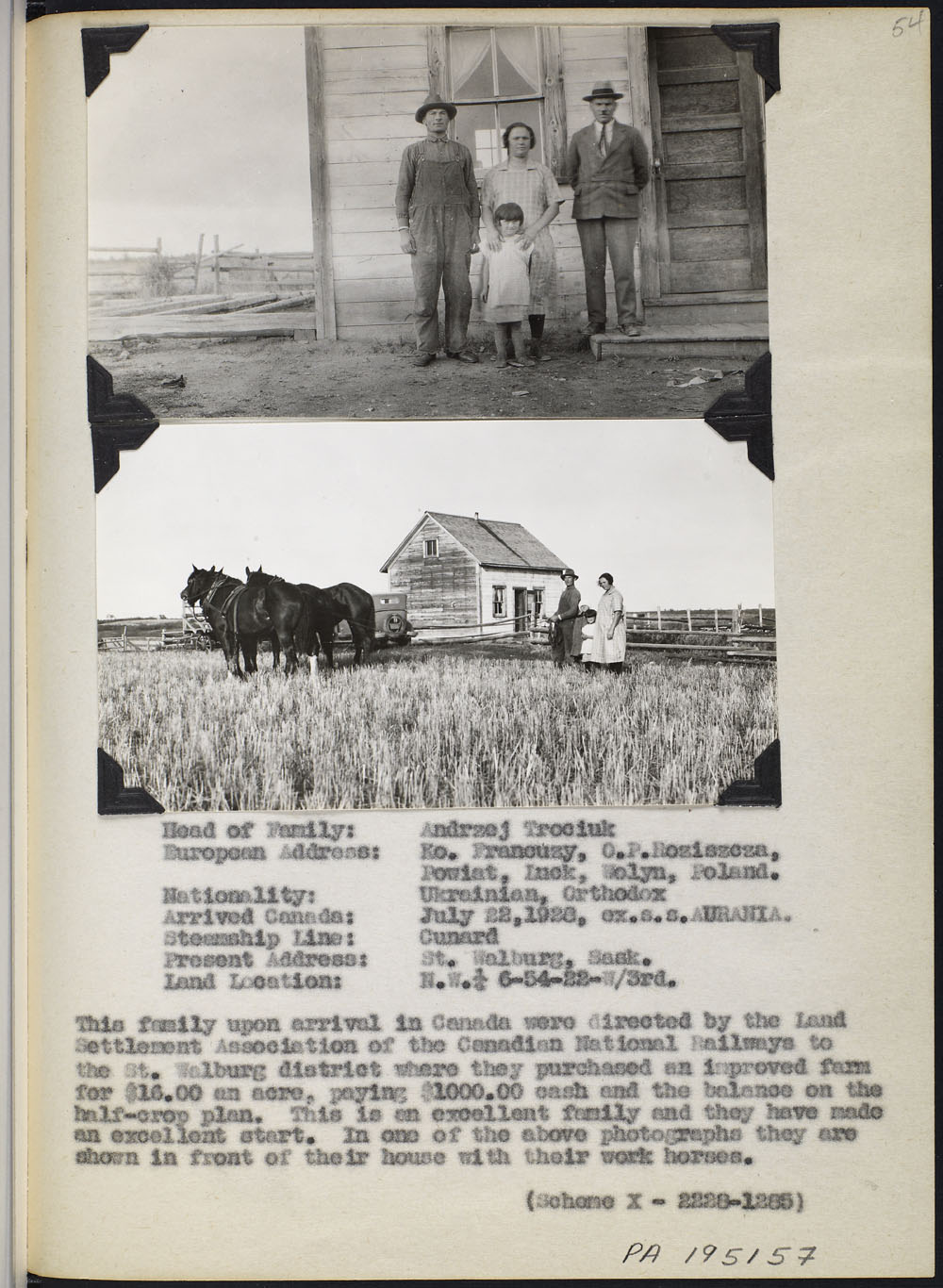