Capture of the Tigress and Scorpion, War of 1812

The two schooners of the United States Navy, the Tigress and Scorpion, were constructed during the War of 1812 at Erie, Pennsylvania, in time to take part in naval actions in the Battle of Lake Erie on 10 September 1813. They then formed part of the US naval squadron under Commodore Arthur Sinclair that in mid-1814 sailed upriver, past Detroit and through Lake St Clair, and into Lake Huron, the first time the Stars and Stripes was flown in these northern waters. Here they had spectacular careers.

After abandoning the search for the British shipbuilding establishment at Matchedash Bay (the southeastern corner of Midland Bay), Sinclair took his squadron north to the St. Mary's River, where on 23-26 July two boats from the Scorpion, under Lieutenant Daniel Turner, made a devastating attack on the North West Company establishment at Sault Ste Marie and destroyed a British vessel. On 4 and 5 August the Tigress and Scorpion were part of the American fleet that blockaded and unsuccessfully attacked Fort Michilimackinac (captured earlier by the British, see Battle of Mackinac Island).

Sinclair's next assignment was to find the British schooner the Nancy, which had been running supplies, communications and military personnel to Michilimackinac. Sinclair in his flagship the Niagara, accompanied by the Tigress and Scorpion, found the Nancy secreted away near the mouth of the Nottawasaga River, and in the attack that followed, 14 August, the Nancy blew up. Her commander, Lieutenant Miller Worsley, and the ship's company, escaped inland (see Nancy Island Historic Site).

Sinclair, returning to Lake Erie, left the two American schooners to blockade the Nottawasaga and to prevent additional supplies reaching Michilimackinac. The senior officer, Turner, detached the Tigress to cruise off St. Joseph Island and sever the Canadian fur route to the French River. He assigned the Scorpion to watch the entrance to French River.

On 3 September, Worsley and a party of sailors and soldiers, all in four boats, spied the Tigress anchored alone off Drummond Island. With the help of the British garrison at Michilimackinac they captured that vessel after a severe action including an exchange of fire and sharp hand to hand fighting. Worsley continued to fly the American flag, and then went in search of the Scorpion. On 6 September, Worsley sighted the Scorpion and unaware of what had transpired, that schooner was quickly captured. Worsley had avenged the loss of the Nancy. The captures made the British naval armament stronger at the end of the 1814 fighting season than at its beginning. Worsley renamed the Tigress HM Schooner Surprize and the Scorpion HM Schooner Confiance. Worsley, now in command of the Confiance took that schooner to Michilimackinac in late April 1815, and told the British commandant there that peace terms had been agreed to by Great Britain and the United States.

The Confiance was used as a British survey vessel in establishing the International Boundary and was used in various duties protecting British and Canadian interests. Both schooners were sent to Lake Erie, where the Confiance became the flagship of Commodore Sir Robert Hall. In 1830 they were surveyed and found "very rotten."

Worsley's "cutting out expedition" (the use of small boats to seize a larger ship at anchor), is a classic case of its kind, notable in the annals of naval history. The American commanders were largely absolved of blame for the loss of the vessels under their command, insufficient signals being specified as the reason for the second loss. 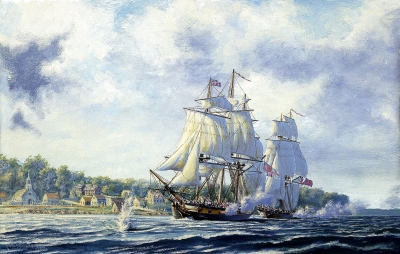