Lamond, best known for Sleepy Maggie - a hit single she performed with fiddler and fellow Cape Bretoner Ashley MacIsaac on his 1995 album, Hi, How Are You Today? - is only one of the latest Celtic acts to receive a major-label release.

This article was originally published in Maclean's Magazine on April 7, 1997

Lamond, best known for Sleepy Maggie - a hit single she performed with fiddler and fellow Cape Bretoner Ashley MacIsaac on his 1995 album, Hi, How Are You Today? - is only one of the latest Celtic acts to receive a major-label release.This article was originally published in Maclean's Magazine on April 7, 1997 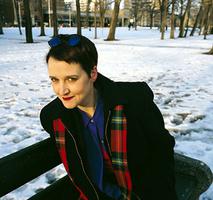 If fans want to understand the lyrics on Mary Jane Lamond's new album, they have three choices: write to her manager, look up Lamond's Web site or learn Gaelic. The little booklet tucked inside the CD case does set out the words to the traditional songs on Suas e! - the only catch is that the words display a bewildering array of accents and a jumble of consonants. But it isn't necessary to know Scots Gaelic to enjoy Lamond's soaring voice or the hypnotic rock arrangements on Suas e! (which means "go for it"). Accompanied by electric and acoustic guitar, fiddle, drums, cello, bagpipes - and even the sound of spinning wheels and step-dancers' feet - Lamond fuses pop, funk and Celtic strains into a rhythmically stirring whole. The 36-year-old Cape Breton-based singer performs plaintive ballads of lost love, work songs and joyful dance tunes - material she has painstakingly researched from oral and archival sources. It is one of the most unlikely pop recordings of the year. But given the current craze for all things Celtic - and Lamond's impressive talent - she may just be the Next Big Thing.

Lamond, best known for Sleepy Maggie - a hit single she performed with fiddler and fellow Cape Bretoner Ashley MacIsaac on his 1995 album, Hi, How Are You Today? - is only one of the latest Celtic acts to receive a major-label release. Late last month, Leahy, a group of nine brothers and sisters originally from Lakefield, Ont., launched its self-titled instrumental album with Virgin/EMI Canada, part of a five-album deal signed last fall. Natalie MacMaster, a 24-year-old Halifax-based fiddler with three East Coast Music Awards and a Juno nomination to her credit, signed a recording deal last year with Warner Music Canada, which released her fourth CD, No Boundaries, and now plans to remix one of her numbers into a dance single.

MacMaster, Lamond and Leahy join a host of other more established performers who have opened up the ears of pop-saturated audiences to Celtic rhythms and reels in the past decade. "People are listening to stuff that, 20 years ago, they would have regarded as hokey or old-fashioned," says Philly Markowitz, host of CBC Radio's Roots & Wings. "But the most interesting aspect is the artists who maintain the integrity of the tradition while experimenting with modern and cross-cultural elements. That experimentation allows the tradition to survive, and it leads younger audiences, like the 18- to 25-year-olds, to the older, purer forms." The new Celtic musicians, she says, are able to keep pace with a fickle and worldly listening audience: "They've given Celtic a cross-generational appeal and a fresh sound."

Such Canadian artists as MacIsaac, Loreena McKennitt, John McDermott, The Rankin Family, Barra MacNeils, the Irish Descendants, the Mahones and Quebec's La Bottine Souriante have found success at home and - to varying degrees, abroad - with an amazing variety of sounds. Richard Mills, an agent at the Toronto office of Vancouver-based S. L. Feldman and Associates, which handles about 10 Celtic acts, says that the genre's popularity, steadily building in the past decade, has been explosive in the past four years. "Celtic music has become more commercially viable, and that's reflected in ticket and record sales," says Mills. "And since Celtic music is a tree with many branches - from someone like Ashley MacIsaac, who has broken a lot of new ground, to John McDermott, who takes a traditional approach to ballads - it appeals to a broad spectrum of people."

But whether they are performing strictly traditional airs, rock-tinged versions of Gaelic songs or neo-Celtic grunge numbers, Canadian musicians are part of a worldwide Celtic resurgence. The Irish music-and-step-dance extravaganza Riverdance has been packing large concert halls around the world for more than two years while a breakaway show, The Lord of the Dance, is also in hot demand. In Japan, the No. 2 karaoke tune is Danny Boy; downtown Tokyo boasts at least nine Irish pubs, complete with music, Guinness, and sporting such names as The Dubliners' Irish Pub Shinjuku. Walking through a marketplace in Istanbul last year, Stratford, Ont.-based McKennitt - who has sold nearly four million records worldwide - heard one of her songs being played on a speaker from one of the stalls. And in Austria, a TV variety show that boasts a huge German-speaking audience whisked the Leahy clan over to Vienna in February to play for three minutes - and then put the nine siblings up for an all-expenses-paid week's vacation. "It was a bit tricky," says Donnell Leahy, 28, "because we didn't have a set three-minute piece, so we had to make up a new number that would show us playing and step-dancing."

Donnell, the fifth of the 11 Leahy children, makes it sound easy. But then the fiddle virtuoso - one critic dubbed him "an extreme fiddler" - has had lots of experience at live performances. Seventeen years ago, the eldest of the 11 children formed The Leahy Family, a fiddling and step-dancing troupe that performed all over rural Ontario at agricultural fairs, fiddle competitions and other special events. A 1983 documentary, which won an Academy Award for best foreign student film, captured the children, their parents, Frank and Julie (a Cape Breton step-dancing champion), and the relentless schedule of farmwork, school, music and step-dancing lessons. And while the rigors of maintaining such a life are evident in the film, so is the joyousness of their music and their dancing. "We would be playing the traditional stuff at fall fairs, and then we'd come home and we'd do our own stuff, wild crazy stuff, in our dining-room," Donnell recalls. " Someone would pull out a fiddle, someone else would sit down at the piano, and we'd play from 10 or 11 p.m. to 3 in the morning - for fun, for fun."

As the Leahy children grew up, university, careers, marriages and children meant they had little time to perform together. But the impetus to regroup on a regular basis began about two years ago, when a passionate fan called Willow McCarter urged Donnell to play publicly more often. "Willow got mad at me for not pursuing my music enough," says Donnell. "She got on the phone to Peter Gzowski at Morningside, and other people in the media. She was a major inspiration." (McCarter died of cancer over a year ago, and the Leahy CD is dedicated to her.)

The newly reconstituted Leahy began with five siblings playing bars and festivals in Toronto, New York City and Chicago. To satisfy fans' demands for CDs at their live shows, last fall family members themselves produced Leahy, now being distributed by Virgin. A video of their single The Call to Dance features black-clad, black-haired brothers and sisters fiddling and playing piano and bass while one sibling, Agnes, gives an exhilarating display of free-form step-dancing.

Mary Jane Lamond does not step-dance, but she includes the sounds of step dancers at a West Mabou, Cape Breton, community centre on Stepping Song, which has been made into a video. It is part of Lamond's passion for her adopted community that she maintain the authentic sounds and songs of Gaelic culture in her music. The singer from Kingston, Ont., spent her formative years in Ontario and Quebec, but had soaked up Celtic influences when visiting her paternal grandparents in Cape Breton. Lamond returned to the East Coast to attend the Celtic studies program at Saint Francis Xavier University in Antigonish, N.S., graduating with a BA in 1995. "I fell in love with the culture and history and the language," says Lamond, who notes that it has taken her about seven years to learn to speak Gaelic proficiently.

While her academic studies did not include music, Lamond sought out Gaelic speakers in Cape Breton to teach her their songs. In 1994, she made a CD of traditional songs that featured a then-largely unknown Ashley MacIsaac, the beginning of a highly successful collaboration that has yielded the hit Sleepy Maggie and extensive touring as a member of MacIsaac's troupe. Now, with the release of her own CD, Lamond is in the midst of another North American tour.

It may be too early to tell, but so far purists seem to be responding well to Lamond's contemporary arrangements of traditional songs. As for her neighbors in Cape Breton, she says: "People there mostly think it's great, or funny, that I get paid to sing Gaelic songs in Vancouver or Seattle or wherever." And she admits to little concern about how the unfamiliar lyrics might affect sales. "What's important is that I'm doing something I really love," says Lamond. "It's my work, my chosen expression."

Lamond has added yet another innovative element to a lively East Coast music scene. And as Sheri Jones, the Halifax-based manager of Lamond and MacIsaac, points out, Cape Breton has been producing wonderful music for hundreds of years. "What's new is that people outside have discovered it," she says. "Maybe Celtic music has become so popular because people want to become more aware of their roots and cling to something meaningful." But whether the current popular fascination with things Celtic will fade or grow, Jones says, "the music is here to stay."