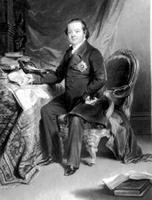 Charles Theophilus Metcalfe, first Baron, governor general of British North America 1843-45 (b at Calcutta, India 30 Jan 1785; d at Malshanger, Hampshire, Eng 5 Sept 1846). He was educated at Eton and in 1801 joined the Indian Civil Service, where he earned a reputation as a talented and judicious administrator. He succeeded to his father's baronetcy in 1822, and later was appointed provisional governor general of India. Between 1838 and 1842, he served as governor of Jamaica.

Metcalfe arrived in Canada early in 1843 to replace Sir Charles Bagot, with instructions to make no concessions towards responsible government the principle on which Bagot's existing Reform ministry, headed by Louis-Hippolyte Lafontaine, was founded. In November 1843 he provoked his ministers' resignation by making appointments without their advice. For some 9 months he carried on the government with the aid of a single minister, Dominick Daly. In Aug 1844 he formed a Conservative administration headed by William Henry Draper, and was sustained at the polls by a small majority in Nov 1844.

Afflicted with cancer of the face, Metcalfe laboured under the most difficult personal circumstances, yet he devoted long office hours to official business. He moved the capital to Montréal, negotiated pardons for the rebels of 1837-38 who had been deported to Australia, consolidated Lord Sydenham's work in the civil service and gave generous financial support to many cultural and philanthropic causes. In November 1845 the progress of his disease giving him no other choice, he resigned his office and left for England. As a reward for his service, he had been created Baron Metcalfe of Fern Hill early in 1845, but his titles became extinct when he died.