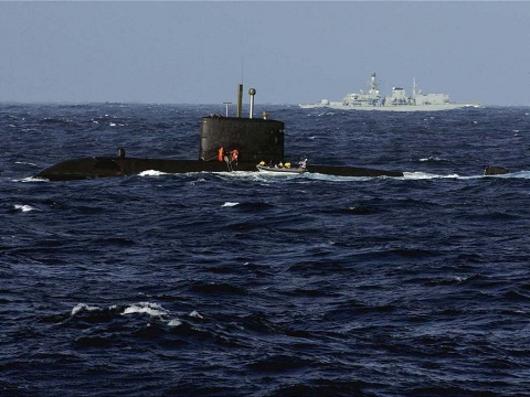 HMCS Chicoutimi is assisted by ships of the Royal Navy in the North Atlantic on 5 October 2004, after a fire on the submarine's voyage to Canada.

HMCS Chicoutimi is one of four used submarines Canada purchased from Britain in the late 1990s. In 2004, on its maiden voyage under command of the Royal Canadian Navy (RCN), a fire caused severe damage, resulting in the death of one crew member. Eight others were injured. Chicoutimi would not sail again for almost 10 years.

HMCS Chicoutimi is a diesel-electric submarine, one of four Upholder-class subs commissioned by the Royal Navy in the early 1990s. Soon afterwards, in 1994, Britain retired all four subs, deciding to go instead with an all-nuclear-powered fleet.

Canada, wanting to replace its aging Oberon-class submarines, purchased the second-hand Upholders in 1998 at an initial cost of $750 million. The program was immediately plagued by problems and controversy. The subs, which had been mothballed for years before Canada purchased them, needed extensive repair and reactivation work. As well, major modifications to the torpedo tubes were required to make them compatible with the RCN’s weapons system.

With costs skyrocketing, the first submarine, HMCS Victoria, was commissioned into the RCN in 2000. HMCS Chicoutimi, the oldest of the four, took the longest to repair and refit. It was accepted into the RCN on 2 October 2004.

On 4 October 2004, HMCS Chicoutimi departed Faslane, Scotland, bound for Halifax, Nova Scotia. The following morning, while running on the surface of the North Atlantic in rough seas about 110 nautical miles northwest of Sligo, Ireland, a crew member discovered a loose nut on the upper vent of the submarine’s conning tower. With the sub preparing to make its first dive later that day, repairs were ordered. There were two options for carrying out the work: run the submarine “opened up,” with both the upper and lower hatches open, or close the area off, effectively locking the technicians out of the sub by shutting the lower lid. Luc Pelletier, Chicoutimi's commanding officer, decided to leave both hatches open, a decision that played a key role in the disaster.

Just after 11 a.m., about 25 minutes into the repair job, a massive wave dumped approximately 2,000 litres of seawater inside the submarine. Crew members estimated there was four inches of water in the commanding officer’s cabin and another two inches on the deck of the control room. About two hours later, an electrical fire broke out in the captain’s cabin and quickly spread to an electrical station below. Within seconds, much of the sub was engulfed in thick, black smoke.

The fire was quickly contained, but nine crew members suffered smoke inhalation. While six were able to return to duty, three suffered severe injuries. Chicoutimi’s medical officer decided the three should be evacuated as soon as possible, but Pelletier determined that the weather and sea conditions were too hazardous to attempt an immediate transfer by boat or helicopter.

The following morning, the British frigate HMS Montrose arrived on scene. Despite high winds and heavy seas, Montrose was able to transfer its doctor to Chicoutimi. After examining the three badly injured submariners, he called for an immediate medical evacuation. Later that afternoon, a Royal Navy helicopter arrived to conduct an aerial evacuation. The first two crew members were hoisted aboard the chopper without incident, but as they were preparing to evacuate 32-year-old Lieutenant Chris Saunders, something went wrong (the exact details were redacted from the board of inquiry’s report). Saunders was brought onto the helicopter. Realizing that he needed urgent medical attention, the helicopter’s commander diverted to Sligo, Ireland. Saunders was declared dead shortly after arriving at the hospital.

On 7 October, Chicoutimi was placed under tow. It arrived back in Faslane on 10 October. The fire had caused severe damage to the submarine’s electrical system. 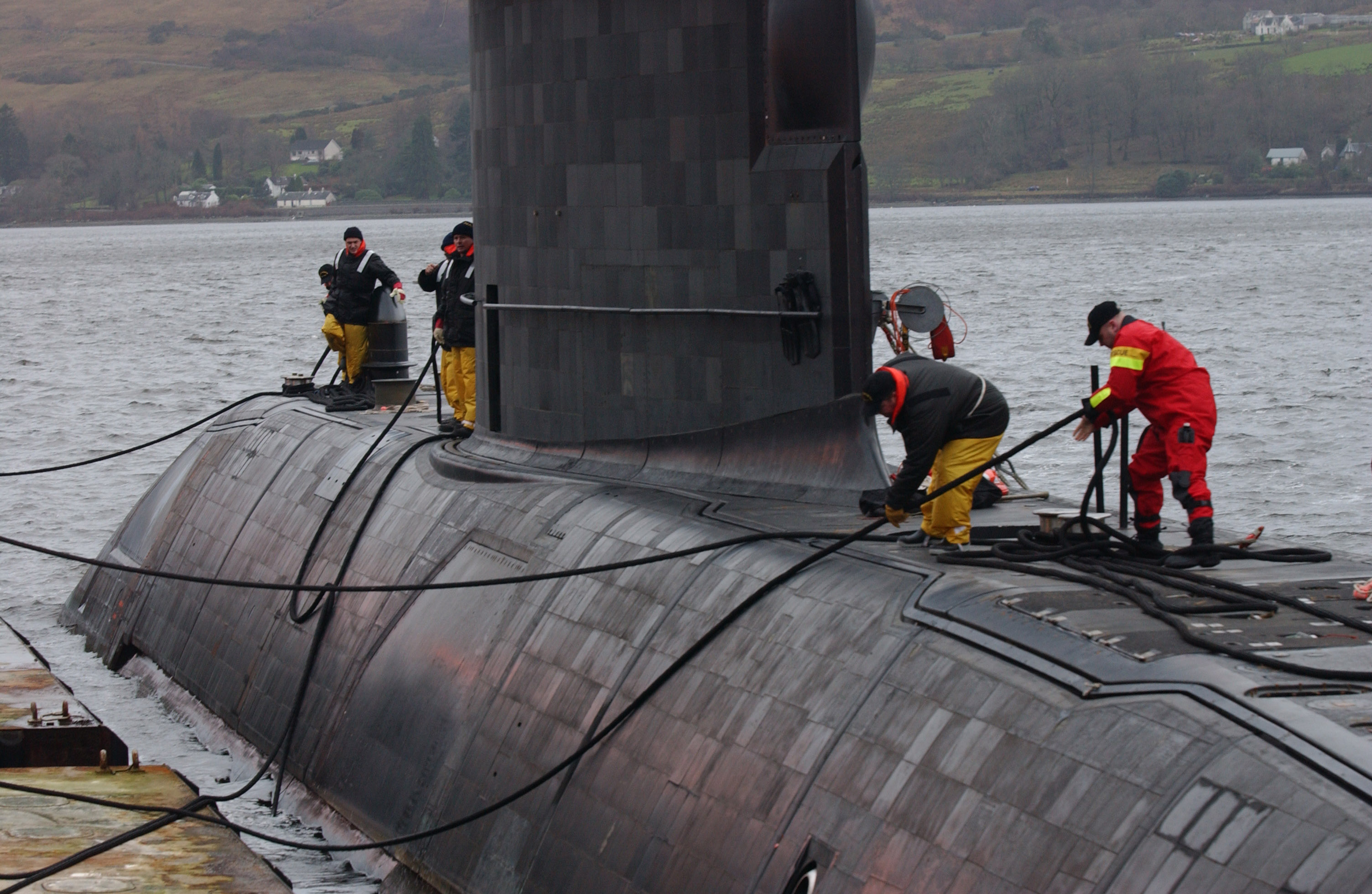 Crew members of HMCS Chicoutimi prepare to depart Faslane, Scotland in January 2005 for the submarine's journey, on board a transport ship, to Canada. A fire on Chicoutimi forced the submarine back to Faslane during its initial voyage to Canada in 2004.

A formal board of inquiry was immediately convened to investigate the tragedy. While the investigation determined the fire was caused by human, technical and operational factors, the board cleared the commanding officer and crew of any blame.

It found that “a significant ingress of water into the submarine…resulted in a chain of events with outcomes that could not have been predicted, and tragic consequences for which no one can be held responsible." It concluded the fire was caused by an arc in the main power cables in the commanding officer's cabin that were immersed in water.

The inquiry’s report said Pelletier's decision to run the submarine with both the upper and lower hatches open in “marginal conditions” was “a key factor” in the chain of events that led to the fire. Still, the inquiry found that Pelletier’s decision was reasonable given the circumstances. However, it concluded that “this incident highlights the requirement for rigorous standard operating procedures for conning tower operation and water control measures in the Control Room."

The inquiry also endorsed Pelletier’s decision to delay the evacuation of Saunders and the other two severely injured crewmen. Given the heavy seas, nightfall and an exhausted crew, the inquiry agreed that an early evacuation attempt would have resulted in an unacceptable level of risk for all involved. Medical testimony indicated that, even if Lt. Saunders had been immediately removed from the submarine, “his prognosis may not have changed."

Evidence at the inquiry indicated that Saunders was working near the "Electrical Space" where the fire erupted. Enveloped by thick, black smoke and unable to find an emergency breathing mask, Saunders made his way to the control room. While crewmen struggled to extinguish the fire, Saunders was found unconscious on the floor.

The inquiry determined that Saunders’ death was caused by complications related to the inhalation of smoke and hot gasses during the fire.

The fire caused extensive damage to Chicoutimi. The disabled sub was first shipped to Halifax and then to Esquimalt, British Columbia. Repairs were delayed — it took until September 2014, almost 10 years after the fire, before the boat was fit to undergo sea trials. The cost of repairs has been estimated to be as much as $125 million.

Chicoutimi has become emblematic of the problems plaguing Canada’s Victoria-class submarine program since it acquired the four second-hand subs.

HMCS Victoria had its electrical system destroyed while it was hooked up to an unsuitable electrical supply in port, knocking the submarine out of service for seven years.

Shortly after the navy took possession of HMCS Corner Brook, a malfunction in its underwater decoy deployer caused severe water damage. And in June 2011, the submarine struck bottom during a training exercise, causing extensive damage to its hull. 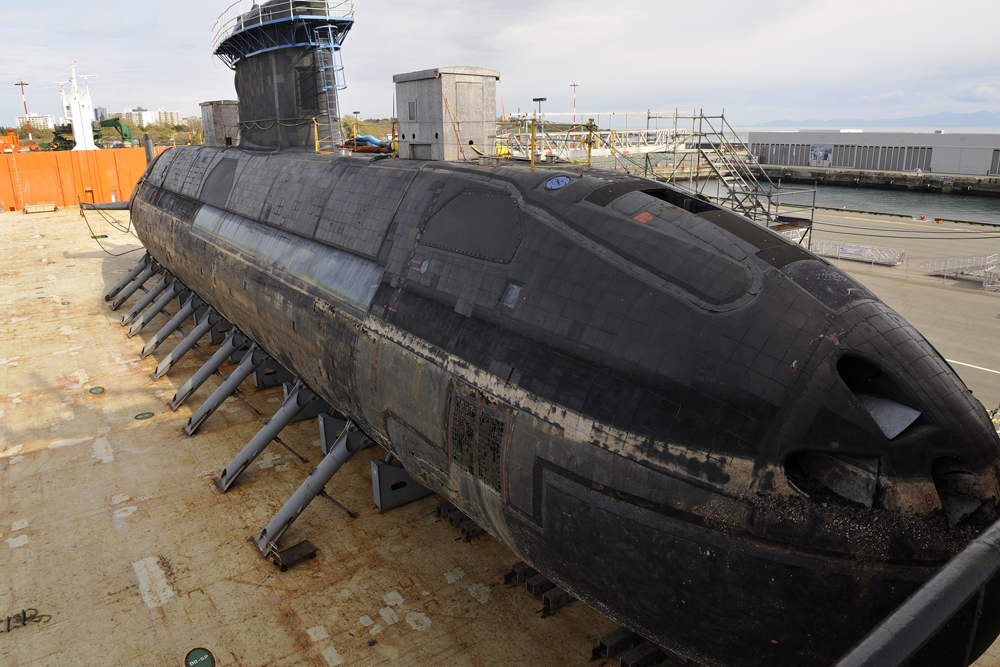 HMCS Chicoutimi arrives at Esquimalt, British Columbia for refit work following a fire on the submarine's initial voyage to Canada in 2004.

The cost of repairing and maintaining the four submarines has been the subject of controversy. In 2008, the federal government approved the expenditure of up to $1.5 billion to service the submarines — double the original purchase price.

In February 2015, the RCN announced that the submarine fleet was “operational,” which meant three of the four subs were available to conduct naval operations. It was the first time the navy could make that claim since the four submarines were purchased back in 1998.