Chilkoot Pass, elevation 1,067 m, is situated on the British Columbia-Alaska border. It was used by the Łingít (Tlingit), expert weavers who traded with the Nahani along the Yukon River to the north and later with Hudson's Bay Company employees. Unbeknownst to Canada, in 1883 the US government sent an expedition to the Yukon via the pass to study the terrain and the Indigenous population. Irritated by this action, the Canadian government sent William Ogilvie via Chilkoot in 1887 to establish the 141st meridian at the Yukon River.

During the Klondike Gold Rush, an estimated 20,000 to 30,000 people crossed the pass in 1897-98. The North-West Mounted Police established a post there to stop lawlessness, collect duties and ensure that each person had supplies for one year. Several tramways were built over the pass to Crater Lake in 1897-98, but the trams and pass fell into disuse with construction of the railway over White Pass, completed in 1900. A hiking trail, "Trail of 98," over Chilkoot was rebuilt in the 1960s, complete with shelters, as a joint venture by the Yukon government and US National Park Service. 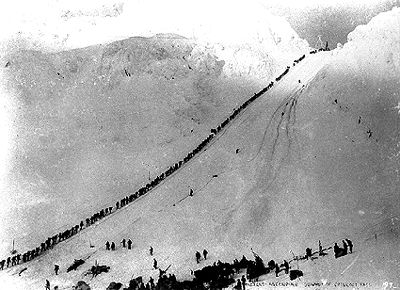