This article was originally published in Maclean's Magazine on December 30, 1996

Maclean's:The furor over the GST raised emotions on all sides.This article was originally published in Maclean's Magazine on December 30, 1996 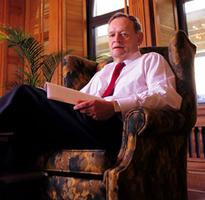 Jean Chrétien on the eve of the 1997, which he and his Liberal Party defended their majority (courtesy Maclean's).

It was the week when Prime Minister Jean CHRÉTIEN fell to earth - at least briefly. After three years of soaring popularity in the polls, Chrétien suddenly faced a personal fire storm when, during an appearance on a CANADIAN BROADCASTING CORP. town-hall forum, he was taken to task for the country's high unemployment rate and his unkept vow to abolish the Goods and Services Tax. Chrétien later apologized for giving what he called "the impression" that the tax could be scrapped without a similar replacement. On Dec. 12, four days before that apology, an exhausted, defiant, but still confident Prime Minister spoke with Maclean's Editor-in-Chief Robert Lewis and Ottawa Editor Anthony Wilson-Smith in his Parliament Hill office, and defended his government's record. Excerpts:

Maclean's:The furor over the GST raised emotions on all sides. How have you reacted to being called a liar by some Reform MPs and in newspaper editorials?

Chrétien: Well, in politics I've been called a lot of things. If you go to Quebec and they call you a traitor, do you think it's very pleasant? When they say you sell out because you're a Canadian, is it very pleasant? For me I know what I said and I know exactly what the government is trying to do.

Maclean's: Are you popular because you're you, or because the opposition is weak and divided?

Chrétien: People know that there is nobody who will have the magic wand and solve all the problems. They know that we live in a global world, that governments in many ways are not able alone to solve the problems. When I travel and I look at my colleagues who are prime ministers or presidents, they all have the problem of unemployment. When I compare the Canadian situation, I think we're doing better than most of them.

Maclean's: Do you feel you've done enough to fight unemployment?

Chrétien: It's never enough, because as long as somebody wants to work it's your responsibility to find a solution. But if you tell me, 'I'm unemployed, Mr. Chrétien, put me on the payroll,' I tell you, 'No.'

Maclean's: Some people felt that when you gave the CBC town-hall response you were uncaring about people who have been trying to find jobs.

Chrétien: I could not lie to them, tell them, oh don't worry, we'll find you a job tomorrow. It's not like that. Today, people will have to find jobs all their lives.

Maclean's: On a personal level, how do you react when friends or associates lose their jobs?

Chrétien: For me, when somebody loses his job, I'm very sorry and if I can help I try to help. I'm on the phone, I go in my riding and I give a letter of recommendation, when conflict of interest permits me, and I've done that all my life. But permanent jobs today are not what they used to be. The permanent job in the paper mill was a job for 40 to 50 years. There will be probably much less of that.

Maclean's: What do you say to young people who can only find part-time work?

Chrétien: They have to look to find a better job and some day they will find one. The great majority of the people find jobs, good jobs, eventually. But sometimes people have to struggle for two or three years.

Maclean's: What assurance can you give people about medicare, which they see as not continuing?

Chrétien: We were spending 10.5 per cent of GDP on medicare and we decided to reduce it to around nine, collectively. Not only us, provincial governments too. But that compares very favorably with the seven to eight per cent spent in Denmark, in Germany and Sweden on medicare, and it's still free for everybody. Some say that to have everybody in the hospital is not necessarily the best solution. We do not decide these things. These are provincial responsibilities.

Maclean's: But the provinces are increasingly turning those responsibilities over to communities. The politicians who are making the ultimate decisions are not accountable.

Chrétien: You tell that to the provincial politicians. I'm not running medicare in the provinces. Medicare is not exactly the same in every province, there are always some nuances. When governments had money, the base was bigger. But when you have a $42-billion deficit, you have to do something. We have cut less from the transfer payments to the provinces than we've cut from our own programs.

Maclean's: What do you do to keep in touch with the mood of ordinary Canadians?

Chrétien: The best way is in my communication with the MPs. And when you write that I don't pay any attention to them, I don't like it, to be honest, because every Wednesday I have a caucus. I take notes at the caucus. This is the best antenna that I have because these guys have to get re-elected. They go back and they talk to the mayor and they go to the Knights of Columbus or the legions and they report back. Plus I have a series of friends whom I call regularly. If it becomes known who they are, they are no longer my friends.

Maclean's: We're still trying to find out who they are..

Chrétien: I won't tell you. My wife also talks to a lot of people. I read the newspapers and I'm in the House of Commons. It's been my profession for 34 years now. When I go to Shawinigan I have a coffee with the boys and girls, in the summer at the Grandmere golf club I will chat with the guys if I play golf there. Most of the time I stop in the tavern.

Maclean's: What's the biggest problem now that you have to address?

Chrétien: Jobs are our main problem and we're struggling, but we know that we cannot put the people on the payroll of the government. We have reduced our own payroll by 15 per cent to put order in our finances. And there are some people who would like to say, fine, we'll take a million people on the payroll, we will be back to where we were. But the economy is creating jobs.

Maclean's: Quebec Liberal Leader Daniel Johnson has made a proposal on distinct society which seems fairly moderate and has been well received by five or six provinces. Are you prepared to help him?

Chrétien: When you talk about distinct society, I have no problem. I passed it in the House of Commons. But the difficulty is we have a separatist government in Quebec that does not want to take much of it. Still, our proposals in the Speech from the Throne are being implemented. We are out of mining, we're out of forestry, we have found a formula for tourism that's now run by the private sector. We have had a lot of evolution in transportation and most of the airports now are run by municipalities, not by the provincial government. I always believe that you solve problems one at a time, because when you come to the big package, there's always an element in the package that some people object to.

Maclean's: You have said that you don't like big visions.

Chrétien: Look at the experience of the grand schemes that were proposed by my predecessor. A lot of it was destroyed by regional jealousy. That's a big problem in Canada, a big problem. If we do something in one part of Canada, the others say, what about us.

Maclean's: You told us two years ago that being prime minister was not as difficult as you had expected. Is that still true today?

Chrétien: In some ways, yes, because I have a good cabinet and the ministers work well and I give them a lot of room - and I check them. The weight of the responsibility is heavy. But it's my job and I like the job. You should never be obsessed by the weight because either you decide nothing or you become too self-satisfied. You have to forget sometimes the weight and say, I have to decide, and you move. On Zaïre, I picked up the phone and started to call the people and we resolved the problem - without having one soldier dead.

Maclean's: If the voters keep liking you, how long do you intend to keep being prime minister?

Maclean's: Is it true you told your caucus that the election will be in the summer or the fall?

Chrétien: Do you want me to call it today? I might decide right away, I'll call my wife and ...

Chrétien: I told them to get ready. There will be an election within 22 months. I say jokingly that calling an election is one prerogative the prime minister has and I intend to use it when it suits me.