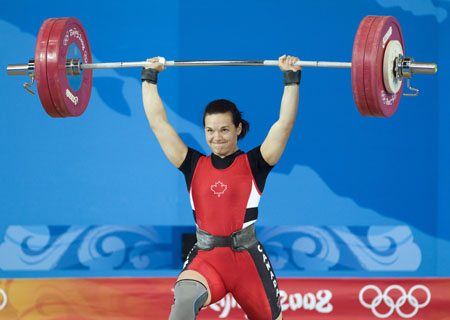 Girard was born in Elliot Lake, Ontario, but was raised in Rouyn-Noranda in Quebec. She began weightlifting in 1995, when her entire family became involved in the activity. In 1996, she competed in her first provincial competition. She continued to compete in provincial and national competitions through the late 1990s before becoming a member of the Canadian team in 2001 at the age of 16.

Girard’s international success earned her a spot on Team Canada for the 2008 Olympic Summer Games in Beijing. There, she narrowly missed the podium in the 63 kg weight class, just three kilograms away from the bronze (although she was awarded bronze in 2018 when the second-place competitor was disqualified for doping). Being so close to an Olympic medal only pushed Girard harder to improve.

In 2009, Girard moved from Quebec to White Rock, British Columbia. From there, she trained via Skype with her Montreal-based coach, Pierre Bergeron, with assistance from her husband, Walter Bailey, an RCMP officer and fellow weightlifter who competed in the 2005 International Weightlifting Federation (IWF) Junior World Championships. In 2010, she won gold at the Commonwealth Games in Delhi, this time in the 69 kg weight class. There, Girard set two Commonwealth Games Records, with 105 kg in the snatch and 235 kg in total. In 2011, she began training out of Hybrid Athletics in Langley, British Columbia, where she also became a part-time trainer and consultant. That year, she began working with coach Guy Marineau of Montreal. Girard’s hard work paid off: She took the gold medal at the 2011 Pan American Games in Guadalajara, where she set a North American record with 106 kg in the snatch, 134 kg in the clean and jerk, and 238 kg combined.

At the 2012 Summer Olympics in London, Girard received the bronze medal in the women’s 63 kg and finished with a total weight of 236 kg — just behind the 237 kg total of silver medallist Svetlana Tzarukaeva of Russia. Gold medallist Maiya Maneza of Kazakhstan lifted a combined weight of 245 kg, an Olympic record. However, after the retesting of urine samples in 2016 revealed that both Tzarukaeva and Maneza had used steroids, they were disqualified and stripped of their medals. In 2018, Girard was upgraded to a gold medal for the 2012 Games, becoming Canada’s first Olympic champion in the sport.

In 2012, Girard and Bailey co-founded Kilophile, a weightlifting club based in South Surrey, British Columbia, with fellow coach and weightlifter Joel Hugh. The couple have three children. Girard published a book about her life, De la défaite à la victoire, in 2018.