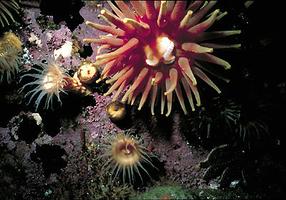 Today, these are considered separate phyla; Coelenterata is used synonymously with Cnidaria. Cnidaria [Gk knide, "nettle"] are characterized by their unusual stinging cells. They are found throughout the oceans; relatively few species have colonized fresh water. About 9700 species are known. Two body forms (polyp and medusa) are present, adapted for different life-styles. Polyps are attached to a surface (sessile); medusae are free-floating (planktonic).

Each cnidoblast houses a flask-shaped nematocyst containing a coiled, hollow thread. The thread turns inside out as it is fired from the capsule by an influx of water which increases pressure inside the capsule. Nematocysts can be used once, then must be replaced. Apparently, a combination of touch and specific chemicals (probably amino acids) released from prey provides the discharge stimulus.

Many types of nematocysts exist. One type, armed with spines, is capable of penetrating prey and injecting immobilizing toxins. Another, nontoxic type is sticky and wraps around prey, preventing its escape. Others provide adhesion to surfaces and defence from predators.

Between the tissue layers is a sheet of noncellular material (mesoglea) varying in thickness and consistency among species. In medusae, mesoglea is thick, watery and resembles jelly. In polyps, it is thin and resilient because of its high fibrous protein content.

The success of cnidarians, judged by species diversity and distribution, can probably be attributed to their efficiency as carnivores. Cnidarians usually present a large body area, covered with nematocysts, to the water; small animals are paralyzed and trapped when they touch this surface. Common prey include copepod crustaceans, shrimps, worms and larvae. A few hydroids, anemones and medusae feed on decaying matter, collected by a combination of cilia and mucus.

Several species of hydroids, anemones, corals and jellyfish, living in shallow water and receiving a lot of sunlight, harbour symbiotic algae in their gut cells. The algae photosynthesize inside host cells, producing food for the host. In return, host cells provide a stable environment and ready access to nutrients and carbon dioxide.

In freshwater hydras, these algae are called zoochlorellae; in marine species, zooxanthellae. Many cnidarians have complex life cycles in which body form alternates between polyp and medusa. Anemones and corals have no medusa stage. The 3 cnidarian classes are as follows.

Hydrozoa comprises hydroids and their medusae (hydromedusae). About 12 species of freshwater Hydra occur in Canadian lakes and streams. Hydra species are unusual in having no medusa stage. Hydroids are abundant on Canada's coasts: some 240 hydroid species and 84 hydromedusae species have been identified. Although some hydroids do not release medusae, many undescribed medusae must exist in Canadian waters. This is not surprising, since some are only 4 mm in diameter, with the largest about 12 cm across.

Most hydroids have a treelike colonial form that develops by asexual budding of feeding individuals. As the colony grows, buds appear which develop into medusae that are released. Some planktonic hydrozoans, eg, Velella, Nanomia and Physalia (Portuguese man-of-war) are colonial, containing up to 7 types of individuals forming a co-operative whole. A group of hydrozoan corals, the Hydrocorallina, is common throughout tropical and subtropical seas. A few species which form pink encrustations on rocks in deep water occur in Canadian waters.

Anthozoa includes sea anemones, corals and sea pens. Anemones tend to be solitary. They are the largest cnidarian polyps; some species reach 1 m across the oral disc, eg, Tealia columbiana of the outer BC coast. Most anemones need a hard surface for attachment; a few species burrow in mud and sand, with tentacles showing above the surface. Several species prefer attaching themselves to snail shells occupied by hermit crabs.

Scyphozoa (true jellyfish) are much larger than hydrozoan jellyfish. They exist throughout the oceans, particularly in coastal areas. Fourteen species commonly occur off Canadian coasts, including the conspicuous, golden orange Cyanea capillata, which may reach 1.5 m across. Scyphozoan polyps are small and difficult to find. Normally, a temporary larval form (ephyra) is budded off the polyp by repeated division, so that the polyp resembles a stack of plates.

In some species, the medusa develops directly from the polyp; deep oceanic types (eg, Periphylla) have no polyp. The medusa stage is sexual, producing eggs or sperm. The planula larva, which develops after fertilization, attaches to a hard surface; from it the polyp phase grows. One group, Stauromedusae, can be found permanently attached to seaweeds by stalks.