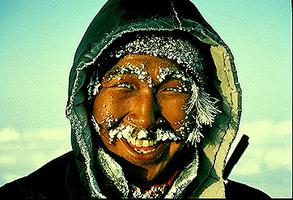 Some Inuit still follow a nomadic way of life, while others are involved in the administration and development of northern Canada (Corel Professional Photos).

Cold-weather injuries are all related to the cooling of the body, or a body part. Cold reduces the metabolic activity of the affected tissues, increasing the viscosity of fluids, particularly blood, and reducing the effectiveness of the nervous system. The body's first response to cooling is to reduce blood flow to the extremities, and to increase metabolism through shivering. With freezing, ice crystals will initially form in intracellular spaces. Common cold-weather injuries include hypothermia, frostnip, and frostbite.

Symptoms of hypothermia are progressive, starting with shivering, loss of fine motor control, numbness, and progressing to violent shivering, loss of large muscle control, amnesia, confusion and incoherent speech, then unconsciousness and muscle rigidity. Ultimately death is due to cardiac and respiratory failure. A field test for mild hypothermia may include an inability to tie shoelaces or to touch one's thumb to one's little finger.

Treatment for mild hypothermia includes removal from the causative factors to shelter followed by a warm, sweet drink and dry clothing. First-aiders must be sure to attempt warming the body core first. Rapid rewarming of the extremities may result in after drop, the continued cooling of the internal organs. A rescuer in the field may attempt to rewarm the body of a moderate to severe (shivering has ceased) hypothermic victim with warm, moist towel packs or wrapped hot water bottles applied to the groin, neck and armpits only. Severe hypothermia is a medical emergency that requires immediate evacuation to a hospital!

Hypothermia most often occurs under wet, windy and cool temperatures. It may develop slowly over a day's outdoor activities, or rapidly in the case of cold-water immersion. The slow development of hypothermia in outdoor activities is often the result of inadequate dressing for the conditions, a lack of adequate high-energy food consumption for the activity requirements and dehydration. Prevention is thus a matter of carrying and wearing protective clothing appropriate for the worst expected weather conditions, eating high-calorie foods during the activity, and drinking an adequate amount of fluid. Protective clothing should be worn in layers, with a windproof or waterproof layer on the outside. Layers of clothing should be added or shed to maintain a slightly warm body temperature. Be sure to avoid heavy perspiration, the soaking of one's clothing and the resulting reduction of the insulating properties of that clothing. Water-based activities may require full or partial "wet" or "dry" suits.

Frostnip is defined as the freezing of just the top layers of skin tissue and involves only a small area of a cheek, earlobe, fingers or toes. Frostnip is reversible. The skin will be white, waxy and rubbery but still compressible. The affected area may be numb. Treatment involves a gentle rewarming by placing the affected area against warm skin, or by blowing warm air onto it. This may mean placing a warm hand over the cheek, or placing frostnipped toes on someone else's warm stomach. Do not rub or massage the frostnipped tissue; this may cause the ice crystals to damage adjoining cell structures.

Frostbite involves further freezing of tissues to a deeper layer and over a larger area than frostnip. Deep frostbite may include the freezing of underlying muscle and bone tissues. The skin will be white, waxy and solid. When rewarmed, swelling, discoloration and severe pain will occur. For small parties in the "back-country," it may be best to leave the foot (the most common location) frozen until a hospital can be reached. Records show many individuals able to travel on a frozen foot, but a rewarmed frostbite injury usually immobilizes the victim. Treatment for hypothermia may be required and takes priority.

Except in very severe cold weather, frostnip and frostbite victims are usually also suffering some degree of hypothermia. Thus frostnip and frostbite prevention is similar to the prevention of hypothermia. In addition, groups in the out-of-doors in winter conditions should establish a "buddy system" for the regular checking for frostnip of exposed tissues. Individuals must "self-check" for cold extremities, wetness and numbness. Upon the discovery of any frostnip or other symptoms, outdoor parties must stop, treat the condition or symptom and take further preventative steps before the activity recommences. This may mean as little as rewarming a frostnipped earlobe and putting on an earband, or as much as finding shelter, stopping to dry footwear, rewarm toes, have a hot, sweet drink and put on extra clothing.