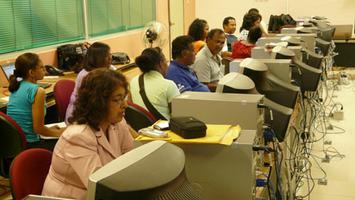 Hundreds of teachers across the Caribbean are rapidly developing their skills and knowledge of information and communication technology (ICT) with the support of COL. The Commonwealth Certificate for Teacher ICT Integration (CCTI) is an innovative open and distance learning program that uses teachers to mentor other teachers on how to integrate ICT into school management, teaching and learning (courtesy Commonwealth of Learning). 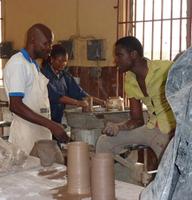 COL is working with the Commonwealth Association of Polytechnics in Africa (CAPA) to expand flexible and blended delivery approaches in technical and vocational education and training (TVET). COL and CAPA have launched a number of activities aimed at alleviating poverty by increasing access to quality skills development for young people and adults (courtesy Commonwealth of Learning). 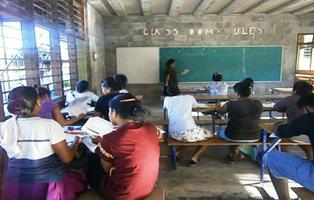 COL supports the establishment of open schools in numerous countries. One of them is in Kiribati (courtesy Commonwealth of Learning). 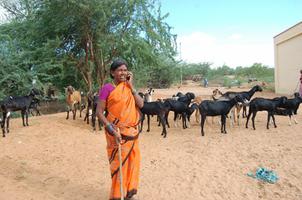 Lifelong Learning for Farmers brings together farmers, educational institutions, information and communication technology (ICT) providers and banks in a \u0093win-win\u0094 situation. With access to learning from educational institutions via ICT providers, farmers are able to obtain credit, leading to vastly improved livelihoods through farming (courtesy Commonwealth of Learning). 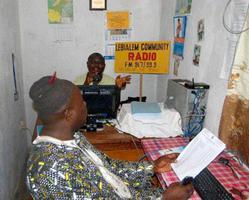 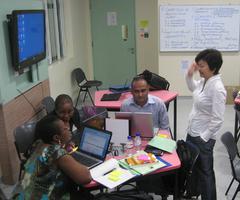 The Virtual University for Small States of the Commonwealth (VUSSC) is building capacity among tertiary education providers in 33 member states and expanding access to post-secondary education (courtesy Commonwealth of Learning).
PreviousNext

The Commonwealth of Learning (COL) is an intergovernmental organization that helps developing countries improve access to quality education and training.

COL was formed after Commonwealth heads of government, meeting in Vancouver in 1987, agreed to create a Commonwealth institute to promote co-operation in distance education. Supported by funding pledges from Brunei Darussalam, Canada, India, Nigeria and the province of British Columbia, COL was established with the mandate of encouraging the development and sharing of open learning and distance education knowledge, resources and technologies.

Hosted by the Government of Canada and headquartered in Vancouver, COL is the only official Commonwealth agency located outside the United Kingdom and is the world's only intergovernmental organization solely concerned with the promotion and development of distance education and open learning. COL helps developing Commonwealth countries increase their access to learning using distance education and appropriate technologies. Canada, through the Canadian International Development Agency (CIDA), is one of COL's major funders.

The Commonwealth of Learning helps governments expand the scale, efficiency and quality of learning by using appropriate technologies, particularly those that support open and DISTANCE LEARNING (ODL). COL's activities are intended to result in a substantial and equitable increase in the number of Commonwealth citizens acquiring the knowledge and skills for leading productive and healthy lives, through formal and non-formal ODL opportunities.

COL is governed by an international board of governors and has a president and chief executive officer. Six major voluntary contributors, Canada, India, New Zealand, Nigeria, South Africa and the United Kingdom, have representatives on COL's board. There are also representatives from all four regions of the Commonwealth - Africa, Asia, Caribbean and Pacific. Australia has re-joined COL as a major funder in 2011.

With some 45 employees mostly at its headquarters in Vancouver, and some at its Commonwealth Educational Media Centre for Asia (CEMCA) in New Delhi, India, COL reflects the cultural diversity and breadth of the Commonwealth. Senior staff members, who serve on rotation, are recruited from around the Commonwealth in a wide range of distance education and administrative fields.

At approximately $11 million per year, COL's annual budget remains modest for a Commonwealth institution tasked with its broad mandate. COL obtains resources for its work in various ways. Its core financing comes in the form of voluntary contributions from Commonwealth governments. COL augments this major part of its budget with income from other sources such as grants received from other intergovernmental organisations and foundations in support of programme initiatives, fees received for professional services and interest on bank balances. There is also significant "in kind" support from COL's partners.

All 54 Commonwealth member countries benefit from COL's work, which addresses the key learning and development challenges associated with the United Nations Millennium Development Goals and Education for All targets such as gender equity, sustainable development, environmental protection and civil rights; as well as the Commonwealth objectives of peace, democracy, equality and good governance.

While often drawing upon the experience and expertise of the Commonwealth's industrialized countries, COL strives to develop South-South co-operation.

COL helps countries develop policies and systems that extend the benefits of education to more of their citizens. It works with institutional and individual partners to give policy advice and to implement program activities in consultation with governments, and provides best practice examples that demonstrate how ODL can help education opportunities expand more rapidly.

COL is not itself a funding body. In the area of knowledge provision, COL strives to "level the playing field" by developing and running systems that enable policy-makers, educators and learners in the world's poorest countries to access information and knowledge on par with that available to people in the wealthy G8 countries. COL produces research publications, start-up guides and online resources for governments, institutions and practitioners.

The theme of COL's new three-year plan for 2012 to 2015 is "Learning for Development." 2015 is the target date set for the achievement of a number of the Millennium Development Goals (MDGs). COL uses the internationally agreed MDGs, the Education for All (EFA) goals and the Commonwealth priorities of peace, democracy, equality and the rule of law as its framework for action.

The plan has three strategic goals. The first goal is quality education for all Commonwealth citizens through increased access to affordable primary, secondary and tertiary education, especially for girls, women and the marginalized. The second goal is human resources development, which involves the establishment of sustainable and replicable learning systems for farming, health and skills development in the formal and informal sectors. The third goal is harnessing ODL and technologies to improve the capacity of governments and the civil society to provide quality learning for achieving MDG and EFA goals.

COL's greatest impact is in giving the Commonwealth's citizens more access to quality education and training through open, distance and eLearning, thereby enabling them to benefit from improved livelihoods, greater gender equity, and overall economic, social and cultural development.