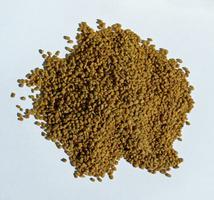 Fenugreek is an annual legume grown in Canada as a spice and a forage crop. It also has some pharmaceutical properties (courtesy Isis Gagnon-Grenier). 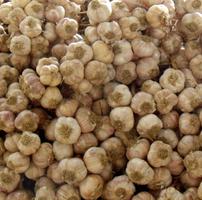 Some of the garlic we find on the Canadian market is grown by local producers, but much of it is also imported from China (courtesy Isis Gagnon-Grenier).
PreviousNext

Condiment crops produce edible materials used in small amounts to impart flavour to food. These include culinary herbs, spices, and plants from which flavourful chemicals can be extracted. Spices are usually pulverized hard parts of plants, and the most significant (eg, black pepper, ginger, cinnamon) are of tropical origin. By contrast, culinary herbs usually are leafy parts of plants of cooler climates. Some vegetables and fruits are also are sometimes used as condiments (eg, dehydrated onion).

The only major cultivated condiment crop in Canada is mustard. India is the world's largest producer, but Canada is the world's leading exporter. About 75% of Canadian mustard comes from Saskatchewan, the remainder from Alberta and Manitoba. Canada generally produces between 100 000 and 200 000 tonnes of mustard annually, from about 200 000 ha, though production has declined in recent years. Brown mustard (Brassica juncea) is an annual herbaceous plant that originated in Asia. The reddish-brown-seeded forms are called brown mustard, whereas yellow-seeded forms are known as oriental mustard. White mustard (Sinapis alba) is an annual herb native to the Mediterranean area, central Asia, and North Africa. "Yellow mustard" refers to both species. Unlike the seeds of brown mustard, the seeds of white mustard have no odour when crushed, and the taste is relatively mild.

Aside from mustard, the only other significant Canadian spice crops are caraway (Carum carvi) and coriander (Coriandrum sativum), both produced on the Canadian prairies, primarily in Saskatchewan. The seeds are used for flavouring and seasoning various foods. Caraway is a biennial herb (annual forms are not grown in Canada) native to Europe, western Asia, and northern Africa (weedy forms grow wild in all provinces of Canada). Coriander is an annual plant native to southern Europe and the Mediterranean. Small amounts of seed of fenugreek (Trigonella foenum-graecum, best known for its use in curries) and dill seed (Anethum graveolens, best known for its use in pickles) are also produced, once again primarily in Saskatchewan. The roots of horseradish (Armoracia rusticana), a perennial, herbaceous plant that probably originated in southern Russia, are employed as a condiment in sauces. Small amounts are grown in Manitoba and Ontario.

In recent years there have been intermittent, small Canadian crops of several culinary herbs such as mint (Mentha species), hyssop (Hyssopus officinalis), anise-hyssop (Agastache foeniculum), and monarda (Monarda species and hybrids), but mainly for extraction of essential oils used for non-culinary purposes. Leafy culinary herbs such as summer savory (Satureja hortensis), sage (Salvia officinalis), tarragon (Artemisia dracunculus), chive (Allium schoenoprasum), parsley (Petroselinum crispum), and basil (Ocimum basilicum) are grown in Canada mostly on a cottage industry basis and in home gardens. There are hundreds of growers of garlic (Allium sativum) in Canada, but this product is mostly imported from China.