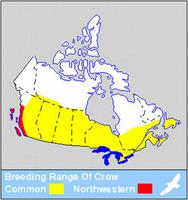 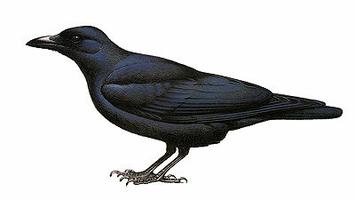 The crow family (Corvidae) is a large family of birds that includes jackdaws, choughs, jays, magpies and nutcrackers as well as crows and ravens. The crow family represents one of the most advanced stages of avian evolution, showing, for example, a highly developed intelligence and a complex social organization. The family is thought to have originated during the middle of the Miocene period (23.7 to 4.9 million years ago) and undergone an initial radiation (divergence) in southeast Asia, before dispersing to Europe, the Americas and Africa. Choughs and treepies are believed to be the most primitive members of the Corvidae. From this group, magpies and, later, jays, ravens and typical crows evolved. At present, about 123 species of Corvidae are recognized.

Crows and ravens are the largest members of the order Passeriformes (perching birds). They range in length from 17.5 to 70 cm. The typical crow (genus Corvus) is either wholly black (including bill and legs) or black with white, grey or brown.

Of the 3 species of Corvus native to Canada, only the northwestern crow (C. caurinus) has a limited range. It inhabits the coast and islands of British Columbia, where it forages along shores, beaches, and tidal flats. The highly adaptable American crow (C. brachyrhynchos) occupies many habitats and feeds on both animal and vegetable matter. It breeds from north-central BC to Newfoundland, but leaves most of that range in the winter. The common raven (C. corax) is also found in most of Canada, but stays year-round.

In places, crows have proven more harmful than helpful to humans, since although they kill a large number of insects, they also damage crops, particularly corn. They also prey on the eggs and young of many desirable birds.