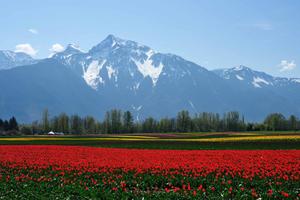 Flowers are cultivated by both commercial growers and hobbyists. In Canada, most commercial production is carried out under glass or plastic, with rare exceptions (eg, gladiolus, baby's breath, shasta daisy). Commercial greenhouse production is a year-round enterprise with crops such as carnation, rose and chrysanthemum, but is seasonally oriented with crops such as poinsettia (Christmas) and Easter lily. Houseplants (eg, cyclamen, cineraria, pelargonium, African violet) are produced in many commercial greenhouses, but the volume is not large relative to the previously mentioned crops. Floriculture represents approximately $1.4 billion in farm gate sales annually with an estimated $5.3 billion in total impact for the Canadian economy, supporting over 22,000 full- and part-time employees in the greenhouse sector alone.

For those who grow flowers for sheer enjoyment, the culture of perennial flowers appears to offer the greatest satisfaction. Regional, national and international societies exist to promote interest in and improvement of specialized species of flowers, eg, lily, dahlia, peony and gladiolus. There exist numerous societies catering to growers. Public interest is also fostered by participation in flower shows sponsored by local societies.

A great variety of flowers can be seen in all parts of Canada, from the time the last snow disappears in spring until the first killing frost of autumn. The earliest flowers, the small flowering bulbs (eg, crocus, puschkinia, chionodoxa, scilla), are followed by the larger narcissus and tulip. In many parts of Canada the primrose (Primula) and its relative, the cortusa, have become very popular spring flowers. Low cushion plants (eg, phlox, aubretia, arabis) also provide colour at this time of year.

In summer, gardeners will opt for the use of annual flowers only, or for a combination of long-blooming perennials with annuals. Some of the more common perennials used include shasta daisies, peonies, oriental poppies, lythrums, hollyhocks, anthemis, day lilies, monkshood and delphinium. Common annuals used include snapdragons, petunias, asters, verbenas, bush balsams and marigolds.

Sources of information for the amateur flower grower are abundant as the popular literature is immense. Commercial growers are also generally well supported by specialists employed by Agriculture Canada (eg, at Research Stations across the country), provincial departments of agriculture, and horticulture departments in some colleges and universities.