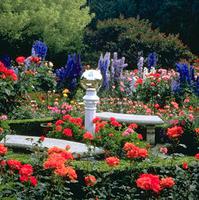 Roses have been cultivated from very early times, but little is known of their origin. The hybrid tea rose, the most popular of modern garden roses, was introduced worldwide in 1867. Today, roses are classified as hybrid tea (large flowered), floribunda (cluster flowered), grandiflora (large-cluster flowered), miniature, shrub, climbing and rambling types; however, these classifications are being changed because of recent introductions of different flowering types. In Canada rose breeding has concentrated primarily on developing hardy roses with better flowers for colder areas (eg, the prairies); however, except in SW coastal BC, most roses still require winter protection. Three early rose breeders were prairie nurserymen.

In recent years, Agriculture Canada's research stations in Ottawa and Morden, Man, have introduced a number of excellent garden roses, some closely resembling the popular hybrid teas and floribundas. Roses will grow in most well-drained soils but prefer a fertile loam in an open location with at least 6 hours of sunlight. They flower from early summer to late fall, depending on climate. All roses require a low-nitrogen, balanced fertilizer during the early growing season and frequent watering. Some shrub roses form large, colourful seed heads (hips) and their leaves may turn red in fall. Common garden pests, frequent on most roses, can be controlled chemically. Black spot and mildew diseases are difficult to control; selecting resistant varieties helps avoid these problems.

Statistics are unavailable on the value of roses to the Canadian greenhouse and nursery industries. However, some 80 million roses are produced for sale as cut flowers in Canada annually. A further, undetermined number are imported from the US and Europe.