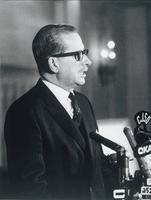 He became premier of Québec in 1966 and continued the reforms of the Quiet Revolution (courtesy Library and Archives Canada/PA-117516).

Daniel Johnson, Québec premier and leader of the Union nationale (born 9 April 1915 in Sainte-Anne-de-Danville, Québec; died 26 September 1968 at the Manic-5 Dam, 214 km north of Baie-Comeau, Québec). As leader of the opposition, he published Égalité ou indépendance (1965), a book that had a major impact on the growth of Québec nationalism.

Daniel Johnson studied at the Séminaire de Saint-Hyacinthe and at the Université de Montréal. During his studies, he was president of the Fédération canadienne des étudiants catholiques and of the Association générale des étudiants de l’Université de Montréal. He was admitted to the Québec Bar in 1940. During the Second World War, Daniel Johnson opposed conscription. He worked alongside Jean Drapeau (future mayor of Montréal and a law student at the time), an independent candidate for the federal constituency of Outrement who also opposed conscription.

Member of the National Assembly and Cabinet Minister

Elected as member of the National Assembly for Bagot under the banner of the Union nationale in the 1946 by-elections, Daniel Johnson was appointed parliamentary assistant to the President of the Executive Council in 1955 and held the office of deputy speaker of the National Assembly from 1955 to 1958. He did not become a cabinet minister until 1958, when Maurice Duplessis appointed him Minister of Water Resources, a title he kept through the governments of Sauvé and Barrette. During his tenure, he initiated the Bersimis-Outardes-Manicouagan hydroelectric project (see Réservoir Manicouagan). In 1953, personal hardship befell Johnson: his wife was shot by her lover, who then committed suicide. Johnson offered to resign, but Duplessis insisted that he stay. Duplessis succeeded in keeping the matter quiet, and Daniel Johnson would remain forever grateful for his support.

In 1961, the Union nationale held the first leadership convention of its 28-year existence. Elected party leader after a hard-fought race against Jean-Jacques Bertrand, Johnson worked to reform the party, giving it a sound platform and a more democratic structure.

Jean Lesage called early elections in 1962, which left little time for Johnson to rebuild his party. The nationalization of hydroelectricity, to which the Union nationale was bitterly opposed, was a key issue. This electoral campaign was also the first in Canada to include a televised leaders’ debate, which Jean Lesage — the better prepared of the two —won.

In 1965, in a context of growing support for pro-independence parties, Johnson published Égalité ou indépendance and convinced his party to adopt the principle of political equality between the two founding peoples of Canada. This served as the cornerstone of his government’s position on constitutional reform. Moreover, the Union nationale’s 1965 electoral platform placed it more in the political centre and distanced it from the Duplessis era.

Johnson came to power in 1966, despite the Liberals having won 6 per cent more of the popular vote. He continued and even expedited the sweeping changes of the Quiet Revolution. In particular, he created the Université du Québec network and the Radio-Québec television channel, and he laid the foundations for the future health insurance regime (seevHealth Policy). In his own government, Johnson was Minister of Natural Resources, Minister of Federal-Provincial Affairs and Minister of Intergovernmental Affairs. In 1967, he welcomed General De Gaulle on his visit to Québec (see De Gaulle and “Vive le Québec Libre”).

Johnson’s son, Pierre-Marc Johnson, led the Parti Québécois from 1985 to 1987 and served as Premier of Québec for several months until the defeat of his party in December 1985 at the hands of Liberal leader Robert Bourassa. His other son, Daniel Johnson, was leader of the Québec Liberal Party from 1993 to 1998 and Premier of Québec until Jacques Parizeau’s Parti Québécois gained power in September 1994. His brother Maurice Johnson was a Progressive Conservative MP from 1958 to 1962.