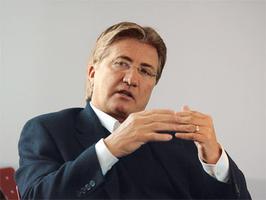 Daniel ("Danny") Williams, lawyer, entrepreneur, ninth premier of NEWFOUNDLAND AND LABRADOR from 2003 - 2010 (born at St John's, NL, 4 Aug 1950). A former Rhodes Scholar, Williams earned a bachelor of arts in law from Oxford University and a bachelor of laws from Dalhousie University. He was called to the Nova Scotia bar in 1972 and was appointed Queen's Counsel in 1984. He spent the duration of his legal career in St John's.

In addition to practising law, Williams excelled at business. While attending Dalhousie's law school, he led a group of businesspeople to seek the first cable licence in Newfoundland and built Cable Atlantic into one of the largest communications companies in Atlantic Canada. He sold the company for $232 million prior to entering politics in 2000. This led to his decision to donate his subsequent political salary, both as Opposition leader and later as premier, to charitable organizations.

Williams was first elected to the House of Assembly in 2001 as leader of the Progressive Conservative Party of Newfoundland and Labrador, the Official Opposition at the time. During the 2003 election campaign, Williams criticized the reigning Liberal Party for their failure to clinch the hydroelectric project planned for Labrador's Churchill River, for the stagnant unemployment rate, and for their inability to motivate Ottawa to change the federal equalization system and fishery management. He claimed that his Progressive Conservative government would strive to create more jobs and boost economic development. He also voiced his government's intention to negotiate a larger share of natural resource royalties from the federal government, and to limit government spending and reduce the size of the public sector.

The voting public agreed that a change in leadership was needed and Williams led the Progressive Conservatives to a majority government in October 2003. He was sworn in as premier on 6 November 2003, succeeding Liberal Party leader Roger GRIMES and ending 15 years of Liberal leadership in the province. His government's position on labour unions led to a rocky first year.

In December 2004, Williams' government took a hard stand against inequities in revenues accruing to Newfoundland and Labrador over its offshore oil resources. In a symbolic gesture against the federal government, Williams ordered that all Canadian flags be removed from the province's provincial buildings. In January 2005, Prime Minister Paul MARTIN reached an agreement with Williams' government, revising the royalty formula and awarding Newfoundland and Labrador $2.6 billion as an advance on royalties.

The popularity of both Williams and his party increased coming into the 2007 election and they had another successful run, emerging with an additional nine seats. In his second term he continued to be a staunch advocate for Newfoundland and Labrador's benefitting from offshore oil revenue, and he continued to develop these industries in the province by consenting to expand the Hibernia oilfields in 2008 (the Hebron project) and embarking on a joint initiative with Nova Scotia (the Lower Churchill hydroelectric project) in 2010. During the 2008 federal election Williams openly attacked the federal Conservatives with the slogan "Anything But Conservative," accusing them of reneging on the promises made by the Martin government. Critics argue that the lack of federal Conservative support in the province and the subsequent second Harper minority may have been a direct result of Williams' anti-Conservative campaign.

Danny Williams announced his retirement as premier in November 2010, his popularity still high and his party cohesive and strong. He was succeeded by new party leader Kathleen DUNDERDALE on 3 December 2010. Given his high approval ratings during his 7 years as premier, Williams is highly regarded as one of Canada's most popular leaders.