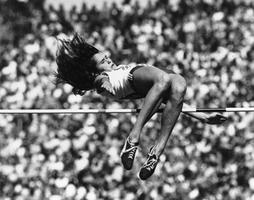 Debbie Brill, track and field athlete (b at Mission, BC 10 Mar 1953). Originator of the reverse jumping style, the "Brill bend," she won the high-jump gold in her first international competition, the 1969 Pacific Conference Games, and was the first North American woman to clear the 6-ft (1.83 m) barrier.

Although she has never claimed an Olympic medal, Brill won gold medals in the 1970 Commonwealth Games, the 1971 Pan-American Games and the 1979 World Cup, as well as a silver in the 1978 Commonwealth Games. In 1980 she was named BC's "Athlete of the Decade." She was made an Officer of the Order of Canada in 1983. Her book Jump was published in 1986. Brill was again honoured in 1998 as BC's Master Athlete of the Year.