Drinkwater Creek, which drains Della Lake, plunges 440 m on its way to Great Central Lake. The falls are located near the southern boundary of Strathcona Provincial Park on Vancouver Island, about 60 km west of Port Alberni. Joe Drinkwater, a prospector and trapper, discovered the falls in 1899 and named them after his wife. He mined gold nearby and built an aerial tramway to haul ore and supplies up and down the cliff that forms Della Falls. The tramway and other mining debris can still be found. A hiking trail from the western end of Great Central Lake follows Drinkwater Creek to the base of the falls. 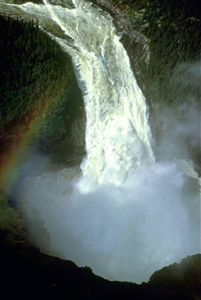 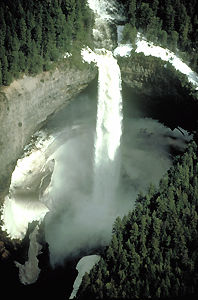